Talk it up: Why working as a London tour guide could be for you

London is a city full of stories. As such, there is always demand for decent tour guides to tell them. Many tourists flock to the Big Smoke desperate for a taste of the city’s history (the more sordid, secret, and off-the-wall, the better). If you’ve a passion for facts, and a knack for making them interesting to others, it might just be the profession for you.

Once upon a time, history was a tour guide’s bread and butter, but these days a guide can choose their area of expertise – London is awash with shopping tours, street art strolls and guided ghost walks. You name it, and someone’s probably guiding it.

One of the city’s most popular walks involves a hefty amount of fibs. London Street Tours’ Liars’ London walk includes two guides, one telling the truth and the other spinning a fabricated version – and it’s up to the participants to tell which is which.

“It’s not enough to be an expert,” says Chris Roberts, who works on this tour. “You really have to be a bit of a show-off. Some people can tell a good joke and some people can’t, and it’s not their fault, it’s just the way it is. It’s the same with storytelling. To be a good guide, you have to be able to tell a good story.”

A tour is an elongated sermon, so passion for the subject matter is key. “We’re selling the city that we are in love with,” explains City of London guide Diana O’Reardon. “We’re selling a product that we believe in. We’re not just taking people through because they want to see England in five days; there’s an emotional thing as well.”

O’Reardon was in IT when she went to a history lecture on London which piqued her interest in the subject. She volunteered at St Paul’s Cathedral before launching her new full-time career. 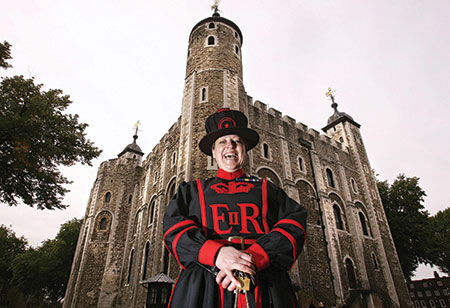 To BB or not to BB

Trevor Jeanes, who is Blue Badge certified, says the process can be “pretty all-encompassing” in the lead-up to a series of exams. The main advantage is BB guides can access London’s big ticket sights that are closed to non-certified guides.

“As an accredited Blue Badge guide, I’m allowed to guide the Tower of London, Westminster Abbey and various museums where an unregistered guide would not be allowed,” Jeanes says.

Still, there are more affordable courses that help build up the skill set for guides. Jeanes is the director of the City of London guide course, which costs a comparably cheaper £500, and runs one evening a week between September and May.

Participants not only learn the history of the area, they learn tactics such as crowd control, both within the group or on the street. But Jeanes says there’s no better or worse for newbies between signing up for certification or cutting their teeth on the job with a coach tour company, such as Big Bus or Golden – as long as they have the passion for the job. 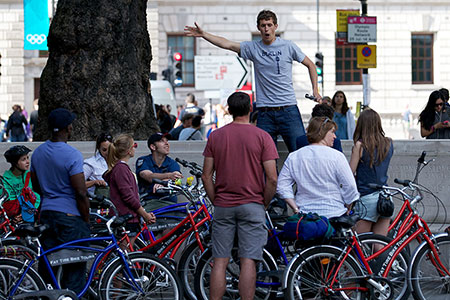 Like with all great-sounding jobs, there are pitfalls. In this case, guides have to deal two main types of irritation. Firstly, know-it-alls. “If you’re clever, you can sometimes get the group to manage the person themselves, as they’ll be as annoyed as you,” O’Reardon says.

The other issue is dealing with abusive or drunk locals, an issue especially prevalent on walking tours around London. Roberts says common sense is an asset when dealing with such situations. Mainly, he says, don’t engage. “It’s a question of being assertive and moving a group along,” Roberts tells us.

The beauty of becoming a tour guide is the hours are flexible and the pay is good – fees reach £150 for a half day or £250 for a full day, and even more if you are giving a tour in a language other than English.

The Institute of Tourist Guiding has a variety of resources for guides, including training courses. They also provide tips for getting started, and links to several organisations that hire guides. Several boroughs also offer alternatives to the Blue Badge course, including Islington, City, Greenwich and Camden.

This is an updated article taken from the TNT Archives.