Bob Mould – interview: The former Sugar and Hüsker Dü frontman on going solo, embracing his past, and loving Kelly Clarkson

Looking ahead to your London show, have you always had a big fanbase here?

Yeah. We came over with Sugar in the summer of 1992, ahead of Copper Blue’s release – the ULU show was one of the craziest I have ever played in my life.

What prompted the return to big pop-rock guitars on recent LP Silver Age?

In 2002, when I began releasing electronic records, people were like, ‘What’s going on?’ Since then I’ve put out three other solo albums [Body Of Song (2005); District Line (2008) and Life And Times (2009)] which were all guitar records. Age though is definitely a concentrated version of that short guitar-pop song thing.

I began working on my autobiography, See A Little Light, in 2008, which was three years of my life during which I wrote no music. I didn’t want to write a book about writing an album. When I came back to songwriting two years ago I knew the Sugar reissues were coming and felt in the mood for loud guitar-pop. And I’d done a lot of work with Dave Grohl and the Foo Fighters [Mould was Grohl’s personally selected touring DJ in 2012 and played on their Wasting Light LP].

Was the book a cathartic process?

Yeah, at the least! We all know our own life stories but the challenge was making sense of it. Going in I thought I’d tell some funny stories, put myself on the back and embarrass myself once and then be done with it all. But that covered just six months of my life.

What was the most difficult aspect?

Talking about my professional life was easy, talking about my personal life less so. I’ve always drawn boundaries about how much I would share [he refused to speak about his sexuality for risk of being portrayed as a ‘gay songwriter’].

Did you have to forgo those boundaries?

Yeah. The rule was to tell my story and not that of those around me. I don’t like deconstructing songs but knew I’d need to. But talking about my childhood and family and my sexuality were things I had never talked about. That was the biggest stretch. 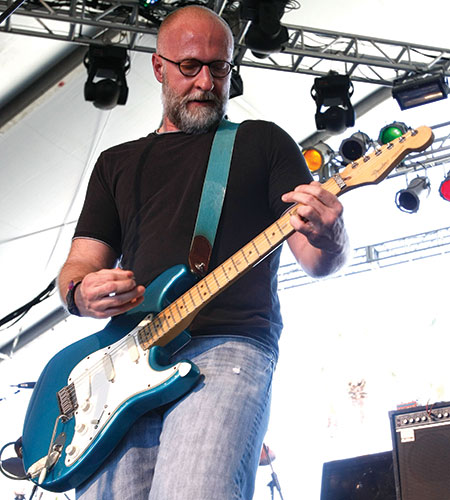 What did you learn about your past?

I understood my childhood better and the impact it had on my work. Growing up in a chaotic house with an alcoholic dad – music was my salvation. Jukebox singles kept me alive, and they still do to this day. When I was 18 I never thought about the music I was making –  I thought I was updating The Ramones or doting over Joy Division. I didn’t see how deep it ran. You could see this hyper-vigilance as a child, never wanting things to get out of control, and it is good to have ownership of your idiosyncrasies.

You are synonymous with alternative rock but have embraced electronic music – what was your wake-up call?

I was born in 1960 and instinctively dialled in to Sixties American and British pop music, and then punk rock in 1976 became my starting point for making music seriously. But I remember revisiting Sixties psychedelic pop in ’83, which shifted my outlook – I then began listening to Appalachian folk music. Then in ’85 I heard [My Bloody Valentine’s] Loveless and that shifted the way I looked at music.

With electronic music, I was living in New York in 1999 and being an out gay man, dance music was the soundtrack to the city and especially the gay neighbourhoods. I heard Sasha’s Xpander EP and thought, ‘Wow, this sounds like [Sugar EP] Beaster, but with machines!’ It sent me down this rabbit hole for a number of years, learning about that music, making it and becoming a DJ, which I still do now as often as I play rock shows.

Is there a reluctance for guitar fans to accept electronic music?

If you look back at the Seventies, you had the hard rock and metal and disco which were at odds with each other, like mods and rockers. We had that struggle for a while and it wasn’t until the early 2000s, and mostly in Europe, that electronic and guitars started to fit together right. Bands like The Notwist or Styrofoam [had been doing it] and then The Postal Service’s Give Up in 2003 [made it] acceptable. Europe was way ahead of the US.

That is very true. She is the real deal. The way she came to our attention was weird, but that is a great pop song. He and I share that guilty pleasure. We all want to be cool. We sometimes think that admitting we like something for mass consumption means the corner of our ‘cool card’ will be cut off, but whatever. Music is music.