The arrival of budget airline flights and its buzzing nightlife scene have given Tallinn a bit of a reputation as a stag and hen party zone in recent years, but look beyond the drinks specials and you’ll find more to this mini-Prague, which is this year starring as a ‘European Capital of Culture’.

Until 1991 the capital of Estonia was clamped under the confines of Soviet rule, but since it broke free in the ‘Singing Revolution’, when the local people showed their defiance in outbursts of communal singing, it has made up for lost time, switching seamlessly from communism to capitalism. Anyone arriving with anachronistic images of what an old Soviet Bloc city looks like will be impressed by its new skyline and also by the chocolate box medieval old core that is graced with lofty church spires, orange-tiled rooftops and narrow cobbled streets.

Tallinn’s compact size is all part of the charm as its main attractions are within easy walking distance.

BOOK A TOUR OF ESTONIA

Half the fun is just ambling around the streets drifting back through the layers of history that peel back at every turn with Russian Orthodox churches and Dominican monasteries sharing the streets with old merchant houses and medieval meeting halls.

The epicentre of Tallinn life is around the Old Town Square, the historic hub that unfurls in a swathe of cobbles laced with pavement bars and cafes. The square is home to the city’s tallest spire, which stretches into the heavens above the Old Town Hall, an especially spectacular sight when floodlit at night. 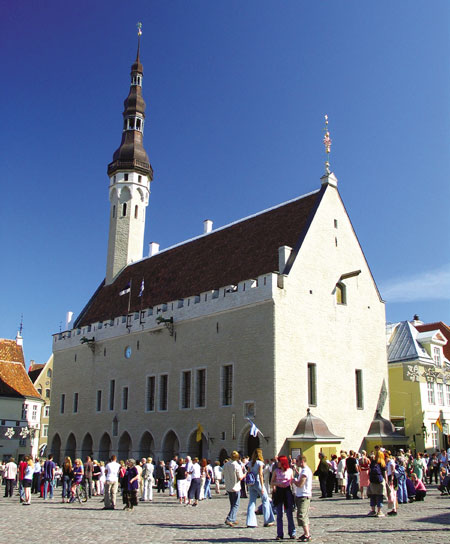 Rising above the square is Toompea Hill, which offers respite from the busy bars below. This castle district towers above the largely flat city, offering views of the winding streets of the old town and out over the Baltic Sea.

During the last few years a lot of money has gone into touching up Toompea’s graceful buildings and making it more visitor-friendly with signposts, scenic lookouts and shops selling the work of local artists.

Culture vultures flock to Tallinn and it is easy to see why even without this year’s European Capital of Culture extravaganza.

Its cerebral attractions include the City Museum, which boasts myriad exhibits that delve into the city’s rich history. Then there is the Maritime Museum, the Old Town Hall’s exhibition space and more esoteric sights like the Doll Museum, Bank of Estonia Museum and even Pinocchio’s Grave, the latter not as it sounds – the last resting place of the fabled wooden boy – but in fact actually a poignant war memorial.

The world-class Estonian National Opera is based in the city centre and there are half a dozen concert halls and theatre venues, all part of a lively cultural scene that impressively managed to survive decades of Soviet suppression. Live music graces many small bars and while walking the cobbled streets, it is not uncommon to hear the sounds of a violin wafting out of a window.

Tallinn’s nightlife, too, is about much more than nefarious stag and hen parties. Traditional bar culture in these northern climes is an integral part of local life in a way that the Irish pubs and pumping clubs the stag parties enjoy are not. Drink Estonian beer with the locals at the no-nonsense Vaali Bar (Muurivahe 14) or savour authentic Estonian food and drink for next to nothing at Karja Kelder (Vaike-Karja 1), the city’s oldest beer hall, while the stag parties stumble by oblivious outside.

Tallinn is hosting about 7000 events as part of the European Capital of Culture festivities (tallinn2011.ee). Some of the highlights include:

WHEN TO GO: Visit in 2011 for a cultural extravaganza.
GETTING THERE: easyJet (easyjet.com) offers direct flights to Tallinn from Stansted.
GETTING AROUND: Tallinn is easily navigable on foot, with a network of trolleybus and buses on hand for longer journeys.
VISAS: South Africans need a Schengen visa.
CURRENCY: Estonia Krooni. 1 GBP = 18.65 EEK.
LANGUAGE: Estonian.
GOING OUT: A pint of beer costs £2.
ACCOMMODATION: Hostel bed from around £15, a bed in a three-star hotel is around £50.
GET MORE INFO: tourism.tallinn.ee

Bar review: Guanabara, a taste of Brazil in London