I am canoeing along the tranquil and gently meandering River Kyllonjoki in Tampere, Finland’s lake district. So far, so normal, except that it’s 3am and the night is as bright and as warm as an early summer evening in London.

The grey sky is filled with wispy pink-and-lilac clouds, the likes of which can only be seen during these other-worldly twilight hours. With no motorboats to break the silence at this late hour, the buzz of insects and the gentle splash of our oars lapping the water creates the soothing soundtrack, like one of those calming chill-out CDs.

The sun hasn’t set due to a natural phenomenon known as “white night”. Thanks to Tampere’s proximity to the Arctic Circle, the area experiences twilight all night around the summer solstice in June. At this time, nights are light enough to read without needing a lamp. The shortest night is on June 21 when the sun rises at 3.42am and sets at 11.12pm.

Before visiting Finland, my knowledge of the country was limited to Santa and saunas. While there are oodles of the latter – 1.8 million, in fact – Finland is also known for its unblemished and undeveloped wildernesses of forests and lakes. It even managed to escape the arrival of Starbucks, until the ubiquitous chain announced it would open a branch at Helsinki airport this year.

Sited 100 miles from the capital is Tampere, hailed as the Manchester of Finland, thanks to its industrial past. The city is now as cool as its British counterpart, its red brick former warehouses and textile factories now morphed into high-ceilinged coffee shops, lofty bars and galleries.

In a bid to see Tampere at its 24-hour best, we’re packing as much into the day as is humanly possible – after all, when the sun doesn’t set, why bother hitting the sack?

We begin our day with a whistlestop tour of the town’s offbeat museums that celebrate everything from Lenin to moomins and international espionage.

The Spy Museum, the only one of its kind in Europe, is chock-full of hi-tech Bond-style spy gadgets: think eavesdropping devices, lie detectors and invisible ink, most of which dates back to the Cold War era. I’m desperate to know how the owner got hold of this stuff.

“I can’t reveal my sources,” he says. “The people who give us these things would not want to be identified.” We also take part in an agent test, trying to crack codes and clues. My low test score shows that I’m not really MI5 material.

Next, we see what Tampere’s natural surroundings have to offer. Wedged between two vast rivers, the town is within spitting distance of a raft of watery pursuits. 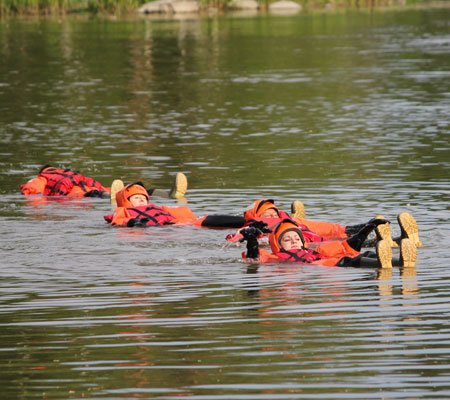 We head to the Kuokkalankoski river for a spot of riverfloating. Forget tubes and rafts, there’s just me and a luminous orange Michelin-man-style drysuit for this activity. Snug inside my DayGlo suit and life jacket, I float downstream feet-first, the current carrying me gently. Fortunately, this tranquil river is free of boats so I don’t have to worry about getting mown down. In what is possibly the world’s most relaxing activity, I bob along while soaking up the view of the fiery cloud-streaked horizon.

Later, an Amazon-like downpour handily stops just in time for our nocturnal canoe trip on the Kyllonjoki River. After an hour of laidback canoeing, we pull up at a clearing in the forest, where we join some locals having a bonfire and singing folk songs. Here, we sip a few beers and feast on grilled sausages slathered in mustard.

“During white night, it’s really common for Finnish people to stay up until the early hours drinking, singing and making bonfires to make the most of the long hours of daylight,”
a 19-year-old local lad tells me.

With time ticking on (it’s almost 5am for Pete’s sake!), we head to lakeside retreat Villa Hepolahti for a traditional smoke sauna, set right at the water’s edge. Sweating profusely after several minutes in the 100˚C swelter-shed, I go for a refreshing dip in the lake, then head back to the sauna to warm up. Finally, at 6am, we drive back to our hotel for some shut-eye. It’s been the perfect Finnish to 24 hours of non-stop action. 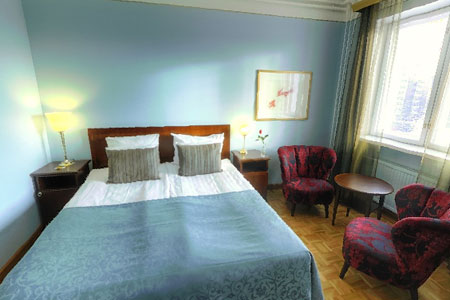 Eat, drink and sleep on any budget

Budget For a lively Nordic atmosphere and Scandinavian fare, swing by the hip Gastropub Nordic, in Otavalankatu 3. Even the background music is exclusively Nordic. Mains from £7.25.
gastropub.net/nordic

Midrange Feast on German sausages while supping a range of flavoursome pale and dark beers, ciders and schnapps at Plevna Brewery Restaurant, in Itainenkatu 8, set in one of the old cotton mills. Half a litre of beer from £4.80; mains from £8.70. plevna.fi

Luxury Get a taste of the high life at Nasinneula, in Sarkanniemi Adventure Park, the revolving restaurant at the top of the Nordic country’s highest observation tower. Serving gourmet Finnish cuisine, an a la carte six-course menu costs £50, including reindeer for the main.
sarkanniemi.fi/nasinneula/en

Budget Hip bar/ cafe Kahvila Valo, in Puutarhakatu 11, offers a good selection of wine and beer, as well as the best espresso in town, according to those in the know. Cocktails from £2.80.
kahvilavalo.fi

Luxury The super-glam Groove Bar and Cellar club, in Aleksanterinkatu 22, has guest DJs every Friday and Saturday night. Free entry before 11pm. Beers from £2.30.
groovebar.com

Budget Crash at the award-winning Dream Hostel, in Akerlundinkatu 2, close to the city centre. Free wi-fi, free pea soup on Thursdays and free popcorn on Fridays! Guests can rent bikes from £8 a day. Sleep in a 10-bed mixed dorm for £20 per person per night. Twin room from £50 per night per room.
dreamhostel.fi

Midrange The recently opened three-star  Scandic Tampere Station Hotel, in Ratapihankatu 37, is a stylish pad, located in the town centre. If you’re feeling flash, stay in one of the hotel’s five rooms with private saunas. From £94 per night for
a double room.
scandichotels.com

Luxury Dating back to the 1920s, Sokos Hotel Tammer, in Satakunnankatu 13, is within easy reach of Koskipuisto Park. Free wi-fi and sauna access. From £130 per night for a double room.
sokoshotels.fi