With all manner of acts and bands – rap, pop, old man shuffle-rock (sorry Daltrey), indie champs, resurrected, reunion-enjoying titans and stands ups, too. There’s something for everyone.

Things kick off on Wednesday evening with Daltrey himself joined by Paul Weller and Kelly Jones from the Stereophonics, for a set sure to take in hits from the threesome’s back catalogues, before Paul McCartney takes to the Royal Albert Hall stage on Thursday. The Who, The Jam and The Beatles in 24 hours, now that is a show that takes some beating. But it’s a challenge Daltrey has taken in his stride.

Experience gives way to youth on Friday, as rapper Example brings a touch of contemporary passion, with support from Dagenham grime-star Devlin and synth-sampling popsters Fenech Soler, and Jessie J set to storm the stage with her pop-show-spectacle on Sunday. Saturday night belongs to Britpop gods Pulp who continue to show why they were one of the highpoints of the Nineties indie scene after reforming last year and playing a handful of fest shows.

Monday sees the funny folk take over, with Jason Manford hosting an evening of comedy that includes Tim Minchin and Jimmy Carrr, before indie boy/ girl duo Big Deal support Florence + the Machine to bring things to a climactic close on the Tuesday. Like we said, one of the best line-ups in years. 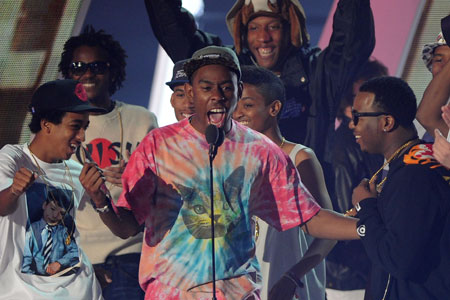 This impossibly hyped New York teen rap troupe, featuring lead vocalist Tyler the Creator (right), who infamously threatened – in song – to stab Bruno Mars in the neck, play their biggest UK show to date. Check out what the fuss is all about and see for yourselves whether they can live up to the snotty obnoxiousness they exude.

Impressively pretentious collective Breton – named after king surrealist Andre Breton – are a group of filmmakers who turned musicians to soundtrack their work (debut LP Other People’s Problems is out Mar 23). Jarring, unpredictable, and deliciously good fun, expect the unexpected from their audio-visual experimentation.