That was awkward: As KRudd shares his shaving tips on Twitter, TNT looks at other Aussie politicans’ cringe-worthy moments

Either by wanting to come across as ‘street’ or as ‘one of the people’ while being as embarrassing as a pissed relative trying to dance with one of your mates at a wedding, or they’ll remove all doubt that they’re completely incompetent by doing something outrageous (chair sniffing?).

Why can’t they stick to what they should be doing – like, erm, running the country? Here, in honour of Aussie prime minister Kevin Rudd last week tweeting a photo of his face having cut himself shaving, TNT looks at the top mishaps by other blundering Australian politicians. Get ready to cringe.

In an attempt to fulfill a desire to be considered ‘a normal bloke’, KRudd felt the need to share the fact he’d nicked his face shaving with his million-plus fans on Twitter, Instagram and Facebook (just to make sure all bases were covered). KRudd – just weeks after being back at the helm in Australia – posted the ‘selfie’ of his wounded face, complete with a bit of toilet paper over the cut, along with the comment: “Note to self: when rushing out the door in the morning, make sure you take care with the razor. It is sharp.”

Good, sturdy advice, KRudd – that’s exactly the reason you’re in power; never mind the economy, this is what matters. Drawing comparisons to ex-leader Julia Gillard being photographed knitting a baby kangaroo for the Duchess of Cambridge’s firstborn, @Jo_Miller tweeted: “KRuddMP seriously, dude? Remember how people thought it was unbecoming of a PM to be photographed knitting a child’s toy?” Quite.

The only way you can watch this video is with one eye closed. It’s that cringe-worthy. Starting off with a weird, awkward jig, Craig Emerson bursts into song during an interview to ABC news in 2012.

Summing up the mood of the nation, muzzavideos commented: “This is just so embarrassing, I have look away, I can’t watch it, I actually feel sorry for the poor bloke. He looks like he might have an illness, I hope he gets help.”

“What I genuinely saw was a nice photo of a young man with what I thought was possibly his father.” That may be the case, but it wasn’t the reality of the situation, was it, Peter Collier? Instead, what the West Australian minister for education actually did was ‘like’ on Facebook a photo of a teenager exposing his testicles.

The gaffe, which was made public earlier this year, involved an image of a 16-year-old with a bunch of mates, but with his shorts slightly pulled down at the front. Collier failed to spot the prank. WA’s opposition spokeswoman for Community Services Sue Ellery pointed out: “This is a man who is a senior minister in charge of the professional standards of dealing with young people and young people’s use of social media.” 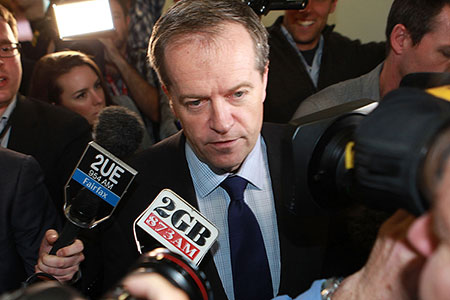 You’d expect politicians to be an educated bunch, complete with their own views and opinions ‘n’ all. Not Bill Shorten. Oh no. He’s a Labor man though and through, who will think whatever he’s told to by the party hierarchy – even if he doesn’t know what it is.

Last year, the then workplace relations minister gave an interview to Sky News Australia on whether Speaker Peter Slipper should be allowed to return to his role after he was accused of sexual harassment and misuse of funds. This is how it went. “I haven’t seen what she’s said, but let me say I support what it is she said,” he told interviewer David Speers. “Hang on, you haven’t seen what she said?” Speers said. Shorten nodded: “But I support what my prime minister said.”

When Speers asked for his personal view, he said: “My view is what the prime minister’s view is.” The anchor pressed: “Surely you must have your own view on this.” Shorten replied: “No, when you ask me if I’ve got a view on this, it’s such a general question, it invites me to go to lots of places.” Like where? To a place where your nose is so far up the party’s arse you don’t know where you end and it begins, that’s where.

Back to 2008, a time when men were men, and politicians were, well, chair sniffers. Despite denying it 13 times, the opposition leader Troy Buswell this year finally ‘fesses to (more) offensive behaviour. After a string of allegations – including pinging women’s bras – Buswell concedes he sniffed the chair of a Liberal staffer, writhing in mock sexual pleasure after she had been sitting in his office in 2005. As you do. Although there was outrage, Liberal MPs instead stood by Buswell, and, rather surprisingly, there was no leadership change.

Buswell continued in politics to grab a man’s crutch, claim money he wasn’t entitled to, have an affair, notch up nine speeding offences, and be accused of dry humping a businessman. So, yeah, turns out that’s exactly what he’s like.

Coolest ways to get fit: Warm up with these seasonal winter sports

I Love A Sunburnt Country