The Antipodeans’ guide to the world’s biggest and best festivals

In many cases, these now world-renowned festivals started off as small village traditions. However, the locals couldn’t keep them secret for long, as the colourful and sometimes dangerous events caught the eye of intrepid travellers, who regaled their tales to other backpackers. People now gather en masse for these huge celebrations. Here are our 10 faves.

When: January 31
What: This is the largest fire festival in Europe. More than 1000 costumed revellers (known as the Jari Squad) march holding burning torches to pay homage to the Shetland’s Viking heritage. The ceremony ends as the hundreds of flaming torches are thrown into a long-ship. Then the celebration really kicks off, with music and entertainment ‘til the early hours. The following day is a public holiday, to allow for recovery – so expect a party to remember.
Getting there:  Fly to Shetland from Aberdeen, Edinburgh, Glasgow, Inverness and Orkney. There are also ferries operating.
Accommodation: Dorm beds start from £10, private rooms from £17. Book accommodation early.
Visa: No visas required if you have one for the UK.
See: uphellyaa.org

When: February 17-21
What: While some cities like to boast they host the world’s best festival, there’s no doubt that Rio’s Carnival is the biggest, sexiest, most colourful and most famous. It’s a hedonistic festival, which dates back to the Ancient Greeks celebrating Dionysus, the god of wine. And no one does hedonism better than the Brazilians. For five days Rio is a riot of festivities, culminating in a parade where dancers and drummers strut their stuff to see which samba school will be crowned champion. Don’t miss it.
Getting there: Most London airports fly to Rio.
Accommodation: Dorm beds start from £12 – however, during carnival time, this obviously rises.
Visa: No visas required for stays less than 90 days for South Africans and New Zealanders. Australians will need a visa in advance of travel.
See: rio-carnival.net

When: March 17-20
What: A spectacular celebration of fire and pyrotechnics to mark the arrival of spring. Giant puppets (fallas), some lifelike, some grotesque, are built and displayed in every neighbourhood in Valencia. The papier-mache puppets are first placed around the city and then, on the final night, burned in a pagan-feeling ceremony accompanied by fireworks. Nights are debauched as the city heats up and three million flame-loving revellers take to the streets. During the day, parades, live music, paella contests and beauty pageants keep the party alive.
Getting there: Most budget airlines fly to Valencia. You can also get there by rail and coach from Madrid, Barcelona and other Spanish cities.
How much: Four-day tours start from about £160.
Accommodation: Dorm beds start from £10, private rooms from £17. Book accommodation early.
Visas: New Zealanders and Australians don’t need visas. South Africans need a Schengen visa.
See: turisvalencia.es

Running of the Bulls, Pamplona, Spain

When: July 6-14, with the bull run taking place at 8am every day. Six bulls are brought back to be killed by a matador in the arena at 6.30pm.
What: This has become a cult event, although the younger generations are increasingly boycotting it on ethical grounds. Its excitement can’t be denied and if you go, you should take part. However, if you chicken out, there are plenty of great (safe) vantage points. Lots of drinking is involved; expect to stay up all night and get slaughtered. In solidarity with the bulls.
Getting there: Fly to Barcelona, Madrid, Bilbao or Biarritz and then catch a train or bus to Pamplona. Or fly direct to Pamplona from Madrid or Barcelona.
How much: Tours start at £200. Book in advance.
Accommodation: Rooms in Pamplona get booked early, but there are campsites outside town. You can also base yourself in Bilbao, San Sebastián or Zarautz.
Visas: Aussies and Kiwis don’t need a visa. Saffas need a Schengen visa.
See: sanfermin.com

When: Last Wednesday in August
What: Always dreamed of throwing more than your weight in tomatoes while stumbling around in a gloopy soup, covered from head to toe in squelchy liquid? Then this is for you. The streets of this usually sleepy town turn to puree as 50,000 people do battle with lorry-loads of ripe tomatoes in an orgy of silliness. Expect to be hosed down afterwards and don’t wear anything you love. Girls should don sports bras to avoid the inevitable.
Getting there: The closest airport is Valencia. Many people also choose to base themselves in Valencia as accommodation in Buñol is limited.
How much: Three-day organised tours from £189.
Accommodation: In Valencia, dorm beds start from £13, and private rooms from £17. Book early to avoid disappointment.
visas Australians and New Zealanders do not need a visa, but South Africans will need a Schengen visa.
See: turisvalencia.es 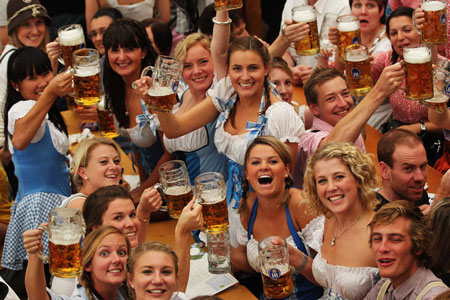 Day of the Dead, Oaxaca, Mexico

When: November 1-2
What: It’s name probably gives it away, but this is a celebration of friends and relatives who have died. It’s been running for thousands of years, before it evolved into the colourful celebration it is today. With its costumes, scary facepaint, candy skulls as well as papier-mache skeletons, this is death at its most fun. Mexico’s exuberant event involves parades, rituals to welcome back deceased relatives, and a mariachi-accompanied visit to the cemetery, via the funfair. It’s how they would like to be remembered. Honest.
Getting there: Fly to Las Vegas or San Francisco, then rent a car or camper van and drive.
How much: Mexico tours start around £595.
Accommodation: Dorms can cost as little as £3 per night in Oaxaca, and £4 for a basic hotel room.
Visas: A tourist card is issued on arrival. Kiwis get 180 days and Aussies and South Africans up to 90.
See: visitmexico.com

When: Aug 27-Sept 3
What: Tens of thousands of people gather in the scorching Nevada desert for this event to celebrate art, community and self-expression. It’s a parallel universe of surreal works – many of which you can ride/ sail across the pristine sands – fabulous costumes, nakedness and themed camps. On the final night, a giant “man” is set alight. Everything from the event is then packed away, leaving no trace of its existence.
Getting there: Fly to Las Vegas or San Francisco, then rent a car or camper van and drive.
How much: Tickets are upwards of £155.
Accommodation: You’ll be camping in the desert, but book a hotel to retreat to after the festival. Trust us, you’ll need it!
Visas: Aussies and Kiwis don’t need a visa for stays of less than 90 days. South Africans require a visa.
See: burningman.com

When: Late September to early October
What: More then six million boozers hit Munich to consume unimaginable litres of the stuff at Germany’s most famous festival. Ever-popular buxom Bavarian wenches will keep your steins replenished. As a bonus, according to TNT insiders, the beer’s so pure you never get a hangover! There are currently 14 large beer tents and 20 smaller ones. Make sure you plan carefully – you’ll be too smashed to wander around to all of them.
Getting there: Budget airlines fly direct to Munich. Otherwise, book a package tour from the UK, which is usually by coach. You can also catch a train from other German cities.
How much: Tour packages start from £120.
Accommodation: Dorm beds in hostels start at £22. Hotel rooms are from £52 for a double. Hotels and hostels book out in a flash for Oktoberfest – some up to a year in advance.
Visas: Aussies and Kiwis don’t need a visa. South Africans need a Schengen visa.
See: oktoberfest.de

When: New Year’s Eve
What: Why spend just one evening celebrating the birth of a new year, when you can spend three? This is one of the most iconic NYE celebrations in the world – renowned for its non-stop knees-up. This year, dance the nights away to a mix of Primal Scream, Mark Ronson and Friendly Fires, as well as the Bombay Bicycle Club and The Vaccines. More than 250,000 people head to the city centre, with loads of entertainment on offer. Events begin with a flaming torch parade and fireworks mark the New Year.
Getting there: You can fly from London on jump on a train or coach – but book in advance.
How much: Three-day tours start from £199.
Accommodation: Dorm beds from £9 and private rooms from £18.
Visa: No visas required if you have one for the UK. see edinburghshogmanay.org

Live music: the best gigs in London this week