You don't need to travel to Edinburgh to see an eclectic mix of acts. The Camden Fringe kicks off next month – here are four acts not to be missed.

Creator David Pustansky says: "We're all about the 'F' words …

fantasies and fears. Specifically yours. We take your dreams of

domination and longings for lust, and play them out live onstage. It

will be unpredictable ?and outrageous in ?equal measure."

mistress in the billiards ?room while it was entertaining guests in

?the library, before Evin jets off to create more havoc. Romance.

The Cabaret ?of Potty ?People

Cecilia Holmes and Gareth Nash say: "We are a part of a trio of electrifying nutcases

through the hour. It's ?new, it's innovative and truly potty."

Rafiq Richard says: "Is Sanjay from EastEnders really my dad? Should

I have another go at being a Muslim? Am I the same colour as a Twix?

?And, ultimately, can I walk like a black man to impress my black

half-brothers ?and -sisters I'm meeting ?for the first time?" 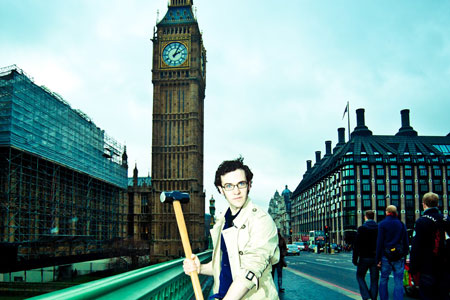 When Rafiq Richards was 15 he met his half-sibling for the first time. The problem was he'd been raised by an Asian family while his siblings had grown up in the black community. Back then, he wanted to fit in so badly he tried to adopt the walk and the speech patterns of a black man.

Nowadays, he just laughs about it and invites others to do the same at his Camden Fringe show, Walk Like A Blackman. "Mixed-race ethnicity doesn't get talked about as openly as it should. It's strange that it's almost taboo – like incest or something," Richards says.

"And then there's the stereotype that being black is like being in an N-Dubz or Tinie Tempah video, where everyone's walking around with women and wearing big chains all the time. It's a negative, commercialised myth."

Like so many of the 150 acts performing more than 500 shows at this year's Camden Fringe, first-time writer Richards views the festival as the perfect stage to launch his act.

"This is a great place to test it on a wider audience. It's evolved over the past two years and it's a great chance to challenge myself as an actor and writer," he says.

Michelle Flower, festival founder and organiser, agrees. She says because the Camden Fringe is smaller than its famous Scottish counterpart, performers can afford not to?be so careful.

"With Edinburgh, people have to play it quite safe,"?she adds. "They invest thousands of pounds, they can be ?up there for a month of their lives, so they're not so prepared to be experimental. At Camden, some acts will be brilliant and some not so good, but you come along to take ?a chance. It's all part of the fun."

One show with a high element of experimentation is The Cabaret Of Potty People – a surreal mash-up of music, sketches, dance, mime and drag.

"It's going to be a colourful ride," performer Cecilia Holmes promises. "Our show is based on reality but it veers off into strangeness. We're quite imaginative, being former art students, and we've really been interested in Lady Gaga, how nutty some of her stuff is. It's going to be quite batty ?in the end."

Holmes also wants to broaden her and creative partner Gareth Nash's audience, branching out from the regulars at the pair's monthly Soho cabaret night to introduce a new sea of faces to their world of Welsh psychic mediums, penis costumes, burlesque robots "flashing lights and vaginas".

Holmes says: "In fact, because we're so new, it's ?a chance to find out who our audience really is. I'm hoping there'll be some tourists who come along. There are usually some around in August."

An act who knows more than a little about being a tourist is Australian Evin Donohoe.

Equipped with enough passports to make Jason Bourne look like a shut-in, Donohoe claims to have raised hell throughout London, New York and half of Europe.

In his show, International Homewrecker, he offers his observations on everything from Richard Dawkins' summer camp for atheists to the finer uses of Harry Potter's ?polyjuice potion.

He then blends them with tales of the whisky he's swilled, the women he's met and the experiences he's had since leaving Australia.

"When I broke up with my girlfriend, the rebound girl turned out to be married. At first I was mortified but then ?I was very impressed with myself," he says of the show's title.

"But, along the way, I have actually physically destroyed places I stayed at, so it is very apt."

The show was so well received at the Sydney Comedy Festival, Donohoe decided to bring it back to London. He hopes to gain the attention of comedy club owners while performing in Camden.

"It seems the older I get, the less responsible I get and that makes for some great material. My adventures aren't over so no doubt there'll be more added to the show as ?I go along."

Another act making it up as they go along is The ImProDigies. No two versions of their performance, Hardcore Imprography, are ever the same.

"The shows are a combination of audience suggestions, headlines from the daily papers and top trending tweets and topics on Twitter," creator David Pustansky says.

"From the audience, it might be two celebrities they want to see in the scandal of the year or a desire of their own. We will explore the naughty, and tweak the nipple of taboo."

And it's not just The ImProDigies who are in a state of evolution. At 2011's Camden Fringe, performances will leak out from the traditional theatre and pub venues to local parks and, in one case, a car park.

As Michelle Flower says: "We've really broadened the scope of it. When we first started, people said, 'You can't put shows on in August. Everyone will be away at Edinburgh'.

"The thing is, though, not everyone in London goes to Edinburgh. There are people here and there are people who want to see something they wouldn't see anywhere else."

Rafiq Richards understands that better than anyone.