The coast with the most: Exploring Waiheke Island in New Zealand

It’s 2pm and I’m hurtling above a forest canopy of a New Zealand native bush, the green leaves just out of reach below as I fire along a zip line at EcoZip (ecozip.co.nz) on Waiheke Island, 35 minutes by ferry from Auckland. The chorus of The Who’s, I Can See For Miles plays in my mind as I rotate on my line, snatching magnificent 360 views of verdant valleys and hills; the sparkling Hauraki Gulf; and, far in the distance, the buildings of New Zealand’s largest city. Alongside me, a fellow adrenaline enthusiast, whoops and hollers as we surge towards the end of our 200m ride, the second in a series of three, each progressively steeper and faster than the last. I want more  – and I’m not alone.

EcoZip is the island’s latest attraction and has fast become a must-do for visitors. It’s not as terrifying as a bungy jump, but offers enough exhilaration to please those seeking a rush from their adventure. At the same time, it affords a chance to get intimately acquainted with New Zealand’s native bush: after finishing our rides, we enjoy a half an hour walk through a 300-year-old forest back to HQ, our guides filling us in on all things New Zealand, from the native tui bird and the towering rimu to medicinal kawakawa leaf and the leaf of the rangiora tree, used for toilet paper (should the need arise). With that, it’s time for a quick debrief, then a van tour back to the island’s main village, Oneroa, to enjoy what the rest of this slice of paradise has to offer.

The 19km long Waiheke Island is a special place for travellers: off the beaten track, but accessible enough to those in the know. With white sand beaches galore; a diverse, friendly 8,000-strong population, made up of anyone from professionals to alternative lifestylers; and stunning scenery, it’s the kind of place your friends back home will wish they visited. The best time to make the ferry trip is at the end of January onwards when the tidal wave of holidaying hordes has receded (Waiheke’s population swells to 30,000 during the new year).

Locals swear New Zealand’s third most populated island has its own micro-climate and weather statistics show there’s less humidity than Auckland, less rain and more sunshine hours. You’ll need more than a day to fully explore Waiheke, such is the variety of the scenery and attractions. 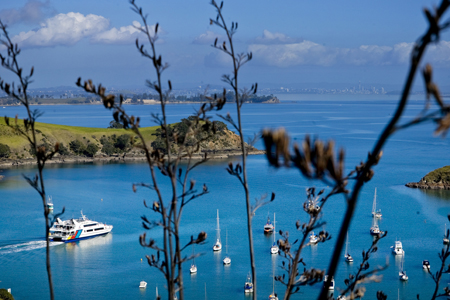 Being an island, Waiheke is surrounded by ocean, meaning there’s enough sand (40km worth) for everyone to enjoy without having to compete for towel space. Big and Little Oneroa, decorated with the red-flowering pohutakawa (the New Zealand Christmas tree) are a short walk from the main village and offer – like everywhere on the island – clear, blue water and sun-bleached white sand. A little further away is Palm Beach, where, if you’re lucky, phosphorescence will float in, making for a stunning night-time display. Little Palm Bach is a nudist hotspot, so if you’re into getting your kit off and letting it all hang out, you’ll be amongst friends. Deeper into the island is Onetangi, at 2km long Waiheke’s biggest beach, which will offer surfing waves if a northerly swell blows in, but is a great spot for windsurfing if not. More intrepid travellers should seek out Cactus Bay, accessible only from the water, but considered Waiheke’s most perfect sandy spot. There are plenty more beaches, so hire a scooter (from $50 a day) and explore the island for yourself, creating a personalised itinerary and a one-of-a-kind travel experience.

It’s one thing being on land looking at the water, quite another being on water looking at land. The pick of the ways to do this is via stand-up paddleboard with Board Riders Waiheke. Paddleboarding, as well as being a great workout, offers a height and view not afforded by many other watercraft and is easy enough to pick up the first time. Explore countless little bays, many otherwise inaccessible, by yourself, as part of a group or with a guide as you float silently across the pristine water, gaining a new perspective of life on Waiheke. (boardriderswaiheke.co.nz)

Those preferring to give their legs a rest can hire a kayak and paddle their way from bay to bay on a variety of guided tours, including overnight and weeklong adventures. It’s by kayak that you’ll have the best chance of encountering some of the abundant marine life around Waiheke. Blue Penguins, gannets and petrel are among the varied birdlife and, under the surface, rays of up to 2 metres are often spotted. Bottlenose and common dolphin make year-round appearances and orca cruise through a few times a year, feeding on the rays. (kayakwaiheke.co.nz) 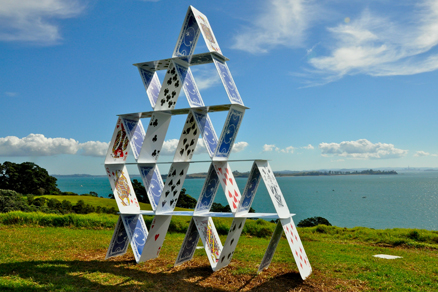 Sculpture by the sea

There’s a thriving arts community on Waiheke and plenty of spots to visit to get your dose of local culture. However, the island’s must-attend arts event is headland Sculpture on the Gulf, an attraction considered New Zealand’s premier contemporary outdoor sculpture exhibition. Thirty new large-scale sculptures from established and emerging artists will be exhibited along a spectacular 2.5km coastal. At the conclusion of a trip through mind-blowing art and views, the island’s top food and drink will be showcased. You’ll have the chance to chow down on a menu from New Zealand MasterChef runner-up Ana Schwarz, and former three-star Michelin chef Nico Fini, both of whom are locals. Waiheke musicians and bands will also liven up proceedings and the event will also host wine tastings and artist talks. Art, exercise, music, food and wine: quite the experience when you add it all up. (sculptureonthegulf.co.nz)

Stony soil and dry, hot summers means Waiheke is a perfect grape growing spot. During the past 30 years, the island has cultivated a growing reputation for the quality of its wines and now boasts more than 25 wineries. Bordeaux-type wines grow especially well, as well as some whites, and the Island’s Syrah (that’s Shiraz to you Australians) are regularly winning awards. It would be amiss to visit New Zealand’s Island of Wine and not sample a glass or three, preferably in the relaxed settings of a vineyard (most host visitors year-round). Pop along to the likes of Stonyridge or Passage Rock or take a tour with Ananada (anandatours.co.nz) for small, flexible tours, Fullers (which will include return ferry ticket and an all-day bus pass; fullers.co.nz) or Waiheke Wine Tours (which welcome the novice as well as the connoisseur; waihekewinetours.co.nz).

Wild On Waiheke is a one-of-a-kind activity venue where you can challenge your mates to a spot of archery or laser clay pigeon shooting and claim bragging rights for the ferry ride home. If there’s a group of you, get involved in the Great Escape Team Challenge where you’ll use vehicles and digital cameras to complete a range of challenges that have been designed to showcase the sights, scenery and activities Waiheke has to offer. There’s also the much-loved Team Tactics where you’ll be challenged to build a catapult, race amongst grape vines using planks and ropes and navigate a maze.

When it’s all over, sit back and enjoy one of six wines made form 100 per cent Waiheke grapes, or get amongst the range of craft beers made on the premises. With giant chess, volleyball and pentanque to help you wind down, the question has to be asked: why would you ever want to return to the city? (wildonwaiheke.co.nz)

Damage & Details: Get a ferry from downtown Auckland for $35.50 return (fullers.co.nz). If you’re travelling NZ by campervan or car, a car ferry operates from Half Moon Bay in Auckland. Supersaver fares begin at $120 return (sealink.co.nz). Budget-conscious travellers should book in at Kina Backpackers in Onetangi (kinabackpackers.co.nz) or Hekerua Lodge in Oneroa (hekerualodge.co.nz).

For the love of orchids