We Were Warriors: Taveuni Fiji

The life of a backpacker progresses as so: At first it’s all about getting tanked on a tropical beach or dancing for days without sleeping at a concert or carnival in some strange country. But eventually you get to the point where you want something deeper out of travel.

You’ll try to cleanse your soul with eco-travel and give something back with community-based travel, but even those will seem blasé after a while. From there some will advance to luxury travel (when they can afford it) while a very small number will seek true adventure and discovery – hardcore Bear Grylls-type stuff.

Earlier this year I did the latter, on a self-guided archeological dig. Well, I didn’t do any digging per se, but I cleared a lot of branches from an 200-year-old hilltop garrison smothered the jungle. And I did it in Fiji of all places – on an island called Taveuni, a 90-minute flight east of the capital Nadi.

But first, a little background… 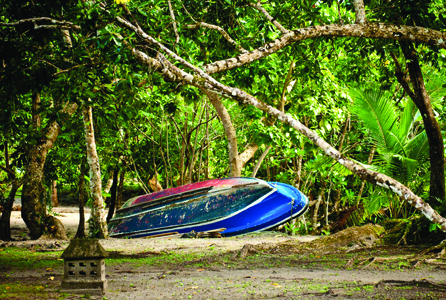 The third largest and most fertile island of the Fijian Group, Taveuni is a whopping 50 percent national park. Blessed with freakishly beautiful attractions like natural waterslides that empty into freshwater lagoons and waterfalls that empty into the sea, this 40 kilometer-long cigar shaped landmass is paradise found.

Its highlands are nothing but thick, hardcore jungle home to amazing fauna like the endangered Fijian Flying Fox and fabled Orange Dove. Fiji’s national flower – the magnificent red and white tagimaucia – grows nowhere else but here, on the shores of a high-altitude crater lake of the same name.

Taveuni is also a world-class diving destination – consistently rated in the top five in the world. There are at least 1,500 kinds of fish here and 1,000 species of invertebrates living in these warm blue waters and more soft coral than anywhere else on earth.

“I’ve been coming here to dive for years and it never stops amazing me,” says Allan Davies, an Australian diver I befriend at Taveuni’s tin-can airport.

“The first time I came here there were 15 dolphins right in front of here. Last year I swam with a minke whale not 50 meters offshore and a few days later, three humpback whales.”

But I’m not here to dive. I’m on an altogether different mission: to investigate Taveuni’s rich military history. In 1860, the canoe navy of Tongan warlord Enele Ma’afu was torn to ribbons in these waters following a 13-year-long campaign of terror against the people of Fiji.

The key to the Tongans’ downfall at Taveuni was a series of fortified hilltop watchtowers – a primitive but effective early warning system that let the chiefs of Taveuni prepare their armies against surprise attacks from the sea.

Today, all of Taveuni’s old watchtowers have fallen pretty to weather and time. One of the few that’s still recognisable as an artificial structure is found on Vatuwiri – a 1,500-acre copra (coconut meat) plantation in the very south of the island. The plantation is owned by the Tartes – descendents of British cotton farmers who settled on the island in 1871.

Allan tells me the patriarch Spencer Tarte is an extremely private man who may not appreciate me snooping around on his land. But he promises to make enquiries on my behalf and call me if he has any luck. 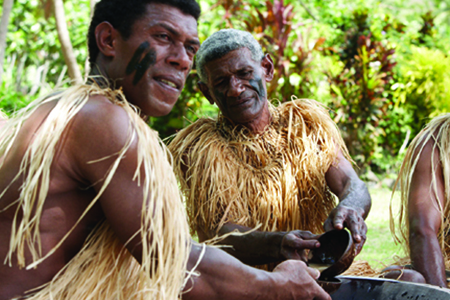 The next day I catch a taxi north along the palm-fringed west coast, taking in killer views of the island-studded Somosomo Strait. Dutch explorer Abel Tasman sailed past here in 1643 but never stepped off his ship. Captain Cook also refused to make land as did Captain William Blight of the Mutiny of the Bounty fame. Such was the reputation of Fiji in those times – a place known to Europeans mariners as ‘The Cannibal Isles’.

I get off at Wairiki – near Taveuni’s administrative center, Waiyevo – to rendezvous with Fijian-Canadian land developer Charles Stinton. The son of the former Fijian ambassador to Australia, Charles has offered to show me around for the day. “Things have definitely changed here since I was a kid,” he says, “but Taveuni still has that raw quality. I think it’s about 30 years behind the rest of Fiji in terms of development.”

Our first stop is the massive Wairiki Mission. Set against dramatic highland scenery that ambles into the ocean, it’s an impressive bloody Church. It’s also a mausoleum for a sterling-silver crucifix considered holy to Taveuni’s Christians, as the pastor Father Petero explains: “The day before the Tongan army came the missionaries told our king if he accepted this crucifix and became a Christian, he would defeat his enemies. So this crucifix is so holy to us.”

After our chat with Father Petero, we jump back in Charles’ car and check out the Waitawala natural waterslide. Formed by molten lava that poured down the face of one of Taveuni’s 150 now-extinct volcanoes, it’s a playground cut out of the Garden of Eden.

“We spent all our free time here when we were kids, playing all sorts of games and even running down the slide on our feet,” Charles says. “I can’t remember how many times I sprained my ankle.

“We also used to surf the offshore reefs. Not many know this, but Taveuni is the only place in the world, other than Hawaii, where surfing is indigenous – only in Hawaii it was for men only while in Taveuni women surfed as well.” 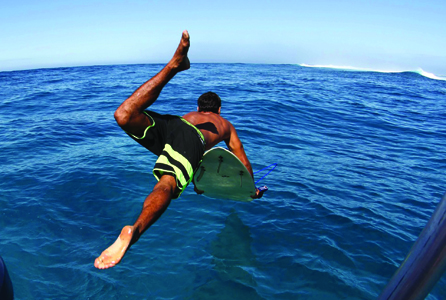 I spend the next few days sleeping in Matei, a speck of a town on Taveuni’s north coast. It’s the high season but there are only afew dozen tourists around, mostly honeymooners bunked up in luxury resorts.

“Most tourists stay at Matei – not only because it’s close to all the airport and all the infrastructure, but because it’s closest to the eco-tourism sites,” says Ronna Goldstein, owner of a restaurant called Coconut Grove. “You’ve got Bouma National Park, the Lavena Coastal Walk and all the waterfalls in between. Go for a swim in one while you’re here if you get the chance. The water’s amazing.”

The most visited of Taveuni’s waterfalls – the tridentate cascades of Tavoro – lie an hour’s drive from Matei on Taveuni’s sparsely populated east coast.

“Taveuni is special: free of the introduced mongoose that has destroyed native wildlife in other parts of Fiji,” reads a billboard at the Tavoro Visitors Center.

“Our island’s lush rainforest interior is becoming increasingly precious as native forests throughout the world are milled for timber.”

I pay the $5 entry fee and continue on foot, engulfed in a impossibly green world brimming with wildlife. I see a pair of Taveuni Parrots, a Fiji goshawk, camouflage lizards and purples land crabs with white-tipped claws. The flora is just as trippy, with forest giants like the Fijian kauri tree, ferns of every description, orchids and pandanus.

The first waterfall is about 30 meters high, rising like a glass obelisk in a sunlit jungle clearing. It’s only a ten-minute walk from the visitor center, making it a popular stopover for passing cruise ships and their silver-haired passengers.

A intense 45-minute climb along a heavily forested ridge leads to waterfall number two. The route involves a number of slippery river crossings, one I end up face down in, even with the aid of a suspension rope. The third waterfall lies at the end of a muddy path ensconced in humidity and heat. It’s far from easy going but the effort is worth it – rewarded with a swim in an Olympic-size freshwater pool. Like Ronna says: the water’s amazing. 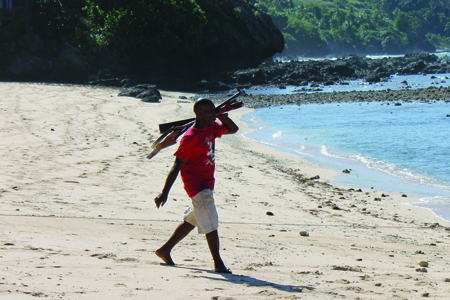 The call I’ve been waiting for…

On my second last day on Taveuni I get the call I’ve been waiting for – permission to visit the old fortress at Vatuwiri. I’ve also been granted an audience with Marcus Tarte, a fourth generation family member.

Taveunians are avid gossipers and over the past week I’ve been fed some very colorful stories about the Tartes. I’ve been told their farm laborers live in colonial-type squalor and must address their employer as ‘Lord’. I was also told the founder, James Valentine Tarte, swindled the land from illiterate natives for two bottles of rum and wooden pipe.
Inasmuch I imagine Marcus as an English aristocrat in a safari suit and pith helmet donning an elephant gun. I picture him perched on a wooden porch sipping an icy mint tulip while a topless Melanesian beauties fans him with a peacock feather.

But the reality couldn’t be any more different. Marcus is of mixed-race, dark as any Fijian, dressed in shorts and an old T-shirt with tribal tattoos on his arms. He laughs when I tell him the story about the rum bottles, saying his family bought the plantation from the paramount chief, Tui Vuna, for more than its worth.

“You’re welcome to go have a look at the ruins but they’re covered in jungle,” he says. “We had it cleared and tried to promote it as a tourist site about 15 years ago, but there was no interest and we gave up. One of my men will show you around, but don’t expect to see much; no one’s been there in years.”

Accompanied by Marcus’ man Navita, I follow a dusty gravel road that ascends into rich green hills. It takes more than an hour to reach the site – an irregularly shaped mount overlooking the reef where the final battle for Taveuni was waged more than 150 years ago.

With baited breath I climb the hillock, searching the ground feverishly until we stumble on a rude stone hedge. We then begin tearing at the vegetation identifying the remains of an elevated rotunda where the paramount chief held court. Peering down the ridge toward the always-blue ocean, I picture an armada of enemy canoes crashing through the reef. The mental image is just about complete when my thoughts are interrupted by Navita, mouthing the one word I haven’t been able to stop repeating all week.

What to do: Peckham Pearls offer lectures on black-pearl cultivation and snorkeling excursions to their pearl farm for FJ$25. The Vidawa Rainforest Walk is a full-day rainforest trek takes in friendly villages and stage one of the Tavoro Waterfalls for FJ$40.

Where to stay: First Light Inn (+679 888 0339) in Waiyevo charges FJ$65 for crabby old double rooms overlooking the Somosomo Strait. The only budget-priced hotel in Taveuni.