On the last Thursday of every month, the club meets in a small boutique bookstore five minutes’ walk from Bethnal Green Tube station. It’s an eclectic crowd, mostly in their 20s and 30s, a mixture of hipsters, word-nerds, frustrated writers, not-so-closet perverts and devastatingly attractive East London blondes. It’s free and informal – the only stipulation being that you bring a bottle of vino and a filthy mind. Done and done.

Indeed, much of my first visit was devoted to lovingly woven tales of Edward Cullen buggering – or being buggered by – various other male members of the Cullen clan. That said, this kind of titillation takes some unexpected forms as well. Who would have thought characters from Law & Order could lend themselves to such fevered eroticism? 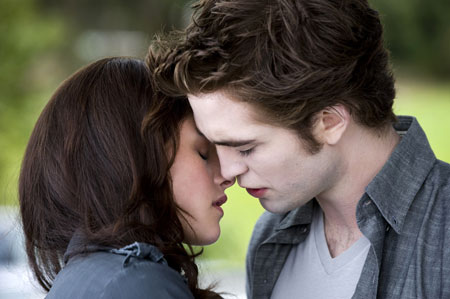 After toying with the idea of forever befouling cherished Harry Potter characters and writing Hermione And The Hippogriff – apologies if this obscene bestiality reference is lost on the reader and apologies, too, if it isn’t – I settled instead upon the moody, noirish tale of a returning Vietnam veteran grappling with re-assimilation into civilian life and the fractured, volatile relationship with his childhood sweetheart.

The twist, the fan-fic element, though, is that the returning vet is Handy Smurf and his squeeze is Smurfette. Either a stroke of genius or confirmation of all the disturbing things one suspects of oneself but finds ways to avoid confronting (read it below).

And my own composition, Vietnam Blues, was either well-received or so unsettled my audience that they felt compelled to pretend they liked it. Either way, the cigarette afterwards was unusually satisfying. 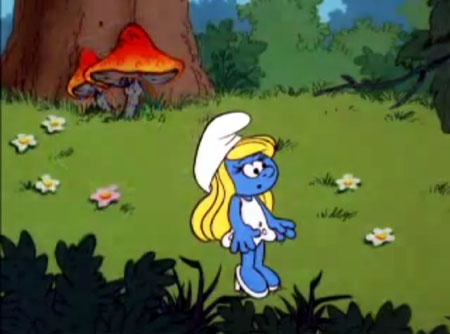 The strap of his duffle bag, containing all his worldly possessions, dug into his shoulder, pressing a furrow into his flesh. His khaki shirt hung open to his chest, where his dog-tags jangled lightly, chiming discordantly with his limping gait. The Carpenter was once more on a familiar path.

It had been too long. He had seen too much. He was a world away from Vietnam now, but somehow felt like he had never left, like he would never be able to.

It was spring, and the old cedars surrounding his village were coming into bloom. To his right, the late-afternoon sun scythed through the canopy, blinding him temporarily. Shielding his eyes against the glare, he felt an uneasiness he couldn’t shake.

He tried to put it out of his mind; things would be OK. He’d settle down and repair himself, repair his splintered life.

This was, after all, the moment that had kept him sane during those months in the jungle, during those hazy, crazy nights in Saigon, during those nightmare hours wading silently through the Mekong Delta. He had survived, he told himself, because of a promise he had made to a girl a long time ago, before he went away. And now, he was just hours from fulfilling it. But would she know him? Would he know her? Maybe things were different now. Doubt gnawed at him.

“Relax, man,” he chided himself. “You’re like a coiled fucking spring. It’ll be fine. There’ll be a party, a barbecue. You’ll have a few drinks, maybe get laid.”

And then, over the final rise, his village came into view. The cluster of small houses with their sloping, toadstool rooves. In the middle of it all, his villagers, the people he had grown up with. Even from a distance, he could make them out, milling gently along the main thoroughfare. And now, one by one, they turned, and saw him. He pace quickened, his heart boomed in his chest, his bag dropped to the ground. From the midst of the villagers, in their soft, loose-fitting white caps, emerged one whose face he had never forgotten. Her blonde locks bobbed as she picked up the hem of her petticoat and dashed through the long grass to meet him. There, on the outskirts of their village, Handy Smurf and Smurfette embraced.

He picked her up and they stood, clasped together, spinning, around and around, as the evening’s first stars twinkled brightly, approvingly, overhead. In that fleeting, golden moment, the shadow of Vietnam lifted from Handy. It was good to be home.

That night, the Smurf Village hosted a party, the like not seen in many years. Greedy Smurf and Baker Smurf laid on a feast and, after all the Smurfs were stuffed, Poet Smurf read an epic composition about Handy’s time in Vietnam.

Smurfette sat next to Handy but they barely spoke – there were so many other Smurfs who wanted to talk to him, wanted to hear about how many Charlie he had killed in the jungle.

As the light failed and the shadows lengthened, though, Handy excused himself from the banquet table and wandered back to his hut in the far corner of the village. An old table he had been fixing before he left still lay around in pieces on the floor. Picking up one of the legs, blanched by the sun, his mind flitted back to the day he went away, to the way Smurfette had begged him not to go and to the promise he had made to return in one piece.

“There’s still time for you to fix it,” came Smurfette’s voice from the doorway.

“I wouldn’t know where to start,” Handy said dejectedly, turning toward Smurfette, who stood leaning, barefoot, against the doorframe, her white petticoat shining neon against her blue skin.

“Sure you do,” she trilled. “You just use those big strong hands and bang it in. Over and over. And you just keep banging until everything falls into place.”

“I don’t know,” Handy said. “It’s been ages since I did anything with wood.”

Handy felt his small blue nub stir in his tight white trousers. Smurfette twirled one of her blonde pigtails coquettishly.

“Why don’t you come over here, soldier? You’ve been gone too long.”

Handy’s senses swam. He registered only the click of the door behind Smurfette as she pulled him to her; the feel of her gossamer shift on his calloused hands as he lifted her and felt her ankles link at the small of his back; the smell of her breath on the side of his face as he pushed himself inside her.

Smurfette’s nails dug into Handy’s shoulders, just below his old squadron tattoo, sending a plume of electricity crackling across his skin. His hands explored her thighs as their eyes locked. Slowly, urgently, Handy began to piston in and out of Smurfette’s trim blue flower. As Smurfette’s back arched, her neck lengthened and she began to breath heavily through pursed lips.

Carrying Smurfette across to his small bed, an unmade pallet of twisted sheets, Handy laid her on her back and held her legs against his shoulders, tracing his fingers along her fine calves, sweat beading on his brow, his pelvis hot against her blue thighs.

It felt like brilliant colours were exploding somewhere behind Handy’s eyes. Those girls he’s met in smokey bars back in Nam didn’t compare. Fucking Smurfette was like bathing in the finest Smurfberry Juice.

As Handy’s breath became ragged, Smurfette bucked against him, her eyelids fluttering as she bit hard into her bottom lip, a stifled cry heralding her powerful climax.

“That’s it, soldier. Now you,” she whispered.

Tightening his grip on Smurfette’s hips, Handy shortened his strokes, his hard blue cock sliding in and out of her. And then, feeling Smurfette tighten around him, every fibre in Handy’s body tightened and his pulse raced as he shot his hot blue seed inside her.

Exhausted, Handy rolled to one side and wrapped an arm around Smurfette, brushing a trail of blonde hair, sleek with sweat, from her cheek.

“Phew,” Smurfette cooed, “that was worth the wait.”

They lay like that for some time – hours, maybe – the sounds of the banquet eventually subsiding, like embers dying in a hearth. As he observed Smurfette’s breath deepen and become more regular, indicating she had found sleep, Handy rose silently and crept beyond the threshold of his hut.

The night air felt pleasant against Handy’s bare skin. Lighting a cigarette, he stared out across the expanses of the village, now deserted and bathed in the cool, white light of the moon. From the shadows behind him, though, he heard the shuffling of feet and the telltale tamping of tobacco in a pipe.

Handy glanced over his shoulder to see who lurked there but, in his marrow, he already knew. It came as scant surprise when, by the flickering light of a long, wooden pipe, a loose-fitting red cap became briefly visible in the darkness.

“It’s good to have you back, son,” Papa Smurf said, stepping forward now into the moonlight.

“It’s good to be back,” Handy said, not meeting the older Smurf’s gaze. “I’ve been gone too long.”

“It’s true. It’s true,” Papa Smurf, agreed, running a hand through his neatly trimmed white beard. “But listen, some things have changed while you were away.”

At this, Handy looked up and it was Papa Smurf’s turn to look away, unnerved by the question in Handy’s eyes.

“Smurfette and I,” Papa Smurf continued, “We’re together now. We’re getting married.”

Google TV to launch in UK