In a tense sea bream cooking competition, TNT’s Jahn Vannisselroy and Tom Sturrock go head-to-head in the kitchen before an expert judges their efforts and anoints a winner.

There’s a well-worn expression – if you can’t stand the heat, get out of the kitchen. Never was the idiom truer, nor the kitchen hotter, than during the great sea bream cook-off.

With master chef Andre Dupin offering his guidance – nodding approvingly at times, but mostly shaking his head in dismay – two of TNT Magazine’s finest strapped on their aprons and cooked up a storm. What they lacked in experience or expertise, they made up for in bravado.

The taste of humble pie?

Jahn Vannisselroy: My girlfriend gives me a lot of good-natured stick for my over-confident efforts in the kitchen.

My use of terms such as ‘sauteed’,  ‘infused’, ‘complemented by’ and the less technical ‘oooh yeaa, that’s the taste right there’, provide a constant source of mirth.

I’m a culinary magpie, gleaning shiny phrases and cooking tips from years of watching TV cooking shows, and this, I like to think, has helped me assemble a formidable gastronomical arsenal.

Tom Sturrock: ‘Culinary magpie’? I’ve seen Jahn’s work in the kitchen and I think he’s been suckered by trinkets rather than treasure.

I, on the other hand, consider myself a master grillman. In summer, people invite me over only to cook their barbecues – they ask me to leave immediately after, but that’s not the point. I’m at my best when the naked flame is fiercest; under this kind of pressure, I expect Jahn’s goose will be cooked. 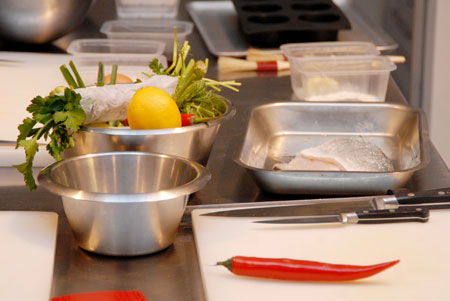 JV: It begins perfectly. Chef Andre is effusive in his praise of my mixing skills, which I assume after my less-skilled colleague proves ‘not capable with whisk’. 1-0 Jahn. Next, the knife work is easy. My blade rolls back and forth; a swift sword shaving the chilli for the salsa with an ease usually only seen on professional cooking shows. Andre is impressed. 2-0 and I’m now beginning to offer Tom pointers. It’s a recipe for disaster.

TS: It begins badly. I am unfamiliar with these alien tools that look like they belong in a dwarf’s magic workshop – there is no need for a whisk when working the grill. Jahn proves admirably capable on the whisk, though, his small hands giving him a distinct advantage.

In a heartbeat, I’m 2-0 down. It’s OK, though. This is merely an hors d’oeuvre to the main course of my culinary mastery.

TS: Confucius said that the way you cut your meat – fish in this case – reflects the way you live your life. And, clearly, the way I expertly de-bone and then score my sea bream reflects a firm but tender sensuality as well as a flawless attention to detail. Ladies, take note.

Jahn, on the other hand, is beginning to battle. Like the All Blacks at a World Cup, his grasp of the basics deserts him on the big stage, when it matters most.

JV: Eagle-eyed Andre notices my haste in plucking the bones from the bream – “it looks like the cat’s been at it” – and duly awards Tom a well-deserved prepping point. He gets another point for his cleaning up after I leave a drop of salsa on the bench. Suddenly it’s game on.

TS: With the fish lightly seasoned and sizzling satisfyingly in the pan, we put the finishing touches on our mashed potato base and black olive salsa. After the fish’s skin crispens to a delicious golden-brown, it’s finished off in the oven.

It’s nearly time to plate up – it’s go-time, the moment of truth. Chef Andre gives us some pointers on presentation but then steps away. May the best man win.

JV: I lovingly shape the mashed potato and Matthew nods encouragingly as the salsa is artistically placed atop, forming a colourful focal point on an otherwise plain plate. But after I afford the bream some of the same love, he whips the kitchen mat out from underneath me, duly awarding Tom the winning point. “You had it until you fiddled with the fish,” is his rebuke.

I limp away, albeit with a full belly,  improved cooking skills and, most importantly, a smile on my face. It’s probably the only time defeat will taste so good. 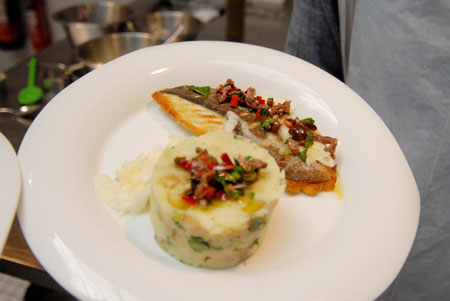 Dice your olives and red chilli and mix them up with a squeeze of lemon and a splash of olive oil. That’s your salsa.

Grab your sea bream fillet – make sure you remove the bones and score three times with a knife. Season the fish with salt and add to a pan pre-heated with sunflower or vegetable oil. Cook skin-side down until the edges turn brown aand then transfer to the oven, heated to 200 degrees.

While the fish is finishing, mash up your potatoes, adding parsley and spring onions. Plate up the fish on top of the spuds, adding a drizzle of salsa and fennel.

» Jahn and Tom cooked at L’atelier des Chefs near Oxford Circus. Their Cook, Eat And Run classes are a great way to hone your cooking skills while learning how to prepare delicious food in your lunch hour. See atelierdeschefs.co.uk for details.