The comic, which is published by DC Thomson, who continue to print similarly aged and iconic comic book The Beano, comes out today with a free reprint copy of its first edition from way back in December 1937. Today’s edition also coincides with the comic’s 75th anniversary.

To make the occasion even more special, Sir Paul McCartney will appear alongside Desperate Dan, in a special final print edition likely to be popular with collectors and nostalgic older readers.

“The Dandy is alive and well, and it’s going to continue as usual it’s just as of next week it’s going to be available online on a regular basis, with all the famous characters and scripts and storylines and humour…We’ve been quite deliberate in making sure there’s very little if any educational value, with the exception of reading.” David Bain, head of digital development at DC Thomson in Dundee, Scotland, told the BBC.

The Dandy continues to be published once a week online and is downloadable as an app for smart phones and tablets – so readers can continue to keep up with the adventures of the Numskulls, Brassneck, Bananaman and the rest of the gang. The online version also features voiceovers, interactive games and virtual pets. 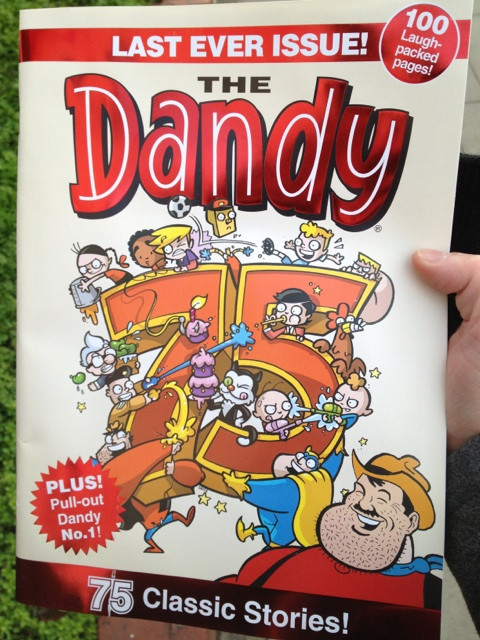 The last ever print edition of The Dandy (sob!) – image via @jonabuft on Twitter

At its most popular in the UK during the 1950’s The Dandy sold around two million copies a week. The numbers have since shrunk to a more modest circulation of around 8,000. The Dundee-based publication is the world’s longest continuously published comic

“I appreciate it’s almost a deliberately naive venture into the unknown for a publisher that’s been cutting down trees for 75 years, squishing them flat and smearing ink all over them,” said Ellis Watson, chief exec at DC Thomson.

“We’re not super slick, we’re not Silicon Valley, but what we are is some pretty talented animators and story tellers that are really excited about seeing if we can introduce these wonderful characters to another couple of generations.” 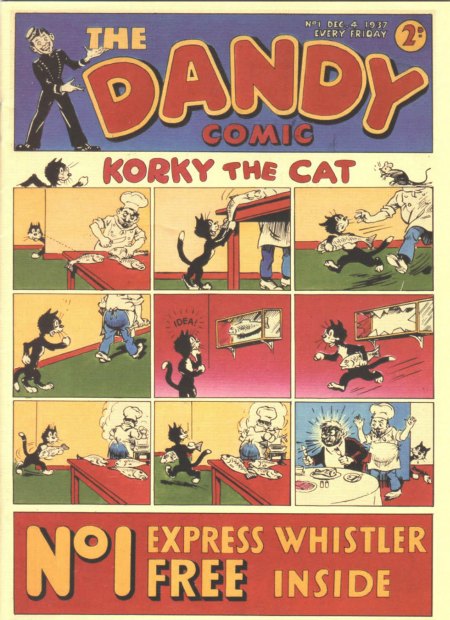 The first edition of The Dandy from December 4 1937

Goodbye printed #Dandy comic. Thanks for being a part of my childhood. You do know it’s all your fault that I am like this 😉

Last edition of the #Dandy goes on sale today. This was my Star Letter from 1982. @bbcbreakfast twitter.com/captainkirt/st%u2026

Join the pool tournament at the Cadogan Arms