The One Show’s Rickshaw rides through new Crossrail tunnel

The One Show’s rickshaw – part of an annual fundraiser for BBC Children in Need – has cycled through a newly built Crossrail tunnel.  The news comes as the team completes the final leg of a 477 mile, eight-day journey from Land’s End to the East End.

Presenter Matt Baker accompanied the rickshaw which was ridden through the tunnel by team member Amira. She signed up to the challenge following the charity’s support after her older sister suffered a sudden brain haemorrhage.

Once open the Crossrail route will run over 100km from Reading and Heathrow in the west, through to Shenfield and Abbey Wood in the east. 42km of tunnels have been successfully built under London, and the rickshaw undertook a 2km route between Canary Wharf and Stepney Green.

Speaking of the visit, Matt Baker said: “This year’s route had already covered some challenging hills and valleys, and we were all excited to take the rickshaw underground.  The sheer operation of what’s being built under London is staggering, so it’s a no small feat for them to down tools and come together to show their support for the challenge. I’m sure the opportunity to cycle through Crossrail’s tunnels will be a memorable moment for Amira.”

To support the challenge, you can donate either £5 or £10 by text. To donate £5 text the word TEAM to 70705 or to donate £10 text TEAM to 70710. Texts will cost your donation plus the standard network message change.  All of your donation will go to BBC Children in Need. You must be 16 or over and please ask for the bill payer’s permission.  For more information and full terms and conditions go to bbc.co.uk/pudsey. 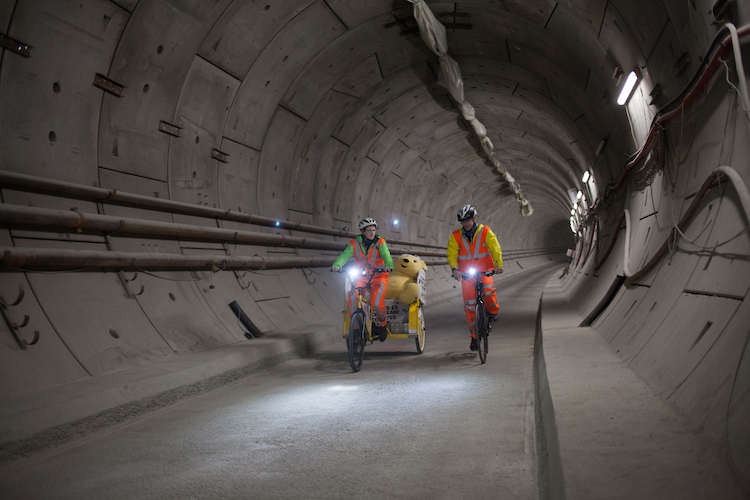 The Man Who Sleeps