The other Ibiza: Caves, beaches and gloriously laid-back hippie-culture

But here I am, ducking down narrow corridors that snake through sharp fossilised stalactites. My guide motions to a thick black ‘X’ and reveals that Can Marca caves, located on a cliff overlooking sleepy San Miguel’s port, were once a secret smugglers’ hideaway.

It feels like a scene straight from Raiders Of The Lost Ark … that is until the artificial golden lights dim suddenly and dramatic red, blue and pink strobe lighting pulsate onto a nearby waterfall. I spot UV lights, too, illuminating waterpools with a green glow. You’ve got to hand it to the locals – only in club-crazed Ibiza would an ancient natural wonder be given a rave makeover. 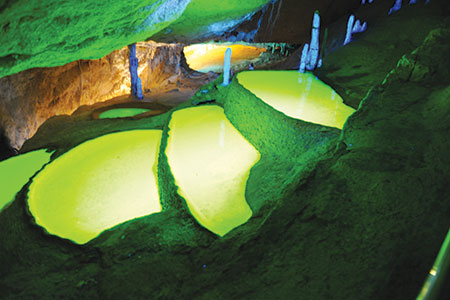 To many, Ibiza is synonymous with clubbing culture and for being the playground of the rich and famous (or the young and wasted). I’ve arrived in mid-May, about a fortnight before the big clubs open for the summer season. Though the island is certainly quieter and a little cooler in temperature during off-peak, it’s also substantially cheaper (some hotels can be four times as expensive in peak season) – and ideal for discovering what else the island has to offer aside from its nightlife.

I wake to clear blue skies and glistening ocean, and decide to head off for a ramble along San Miguel’s rocky beach cliffs – through pine woods with blue, white and red wild flowers, the odd prickly cacti and magnificent views out to sea. Though this tiny island, which can be driven top to bottom in no more than 40 minutes, has been inhabited for over 2500 years, much of it is still rural and its vast array of dense woods, nature parks and beach trails make it ideal for walking and cycling. 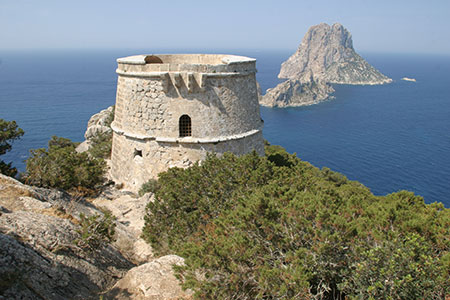 Look out: towers for pirate-spotting

The path soon opens up to reveal a hidden cove with glamorous four-poster day beds scattered on its sandy shore. It looks heavenly, but perhaps 11am is too early to stop for sangria. Instead, I make my way up to the look-out point, where a brick-walled tower stands defiantly, one of many former pirate-spotting stations dotted around the island.

After a day of leisurely exploring the area on foot, I catch a ferry to nearby island Formentera – touted to have beaches more beautiful than Ibiza’s. It takes me a while to find my sea legs on the choppy boat trip, but once there I can’t help but think, “This is paradise.” The chilled, hippy-esque island has only become a tourist spot in recent years, and the beaches are still pristine, so I spend the day hopping from one stretch of blissfully white sand to another on a rented bicycle. 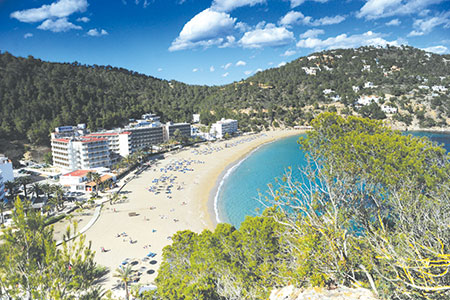 Later, back on Ibiza, I get chatting with one of the staff members at my hotel, 22-year-old Mowita Schutte from Holland. She says the island doesn’t get the credit it deserves for its wide appeal beyond dance parties. “What I love about living here is that it has a really creative vibe, and there’s something for everyone, whether you’re a hippy or a millionaire.”

“What happens in Ibiza, stays in Ibiza,” so says the mantra, but for Mowita this doesn’t refer to debaucherous nights out. It’s more about “anything goes” here.If that all sounds a bit too New Age-y, you may also be interested to know that before clubbers claimed the island as their spiritual home in the Eighties, it really was a haven for hippies. And that Sixties culture is still very much alive today. 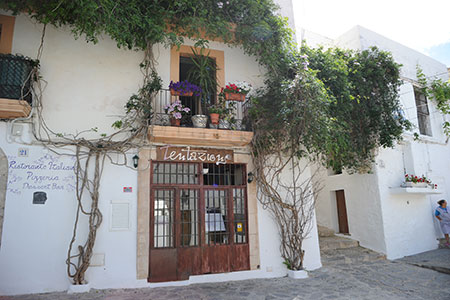 The Old Town in Ibiza City

For my last night on the island, I head to the secluded bay Benirras to watch the sunset. I learn I’ve stumbled into an especially important event for the people who live here – they often stop at this spot to celebrate the day.

Tonight – and on every Sunday – ‘welcome all’ crowds of people gather to watch the glowing orb we take for granted descend to the primal sounds of drum circles, the sight of fire twirlers and the smell of some peculiar tobacco. Dancing around bonfires long into the night, I can’t think of a better way to end my brief holiday on a magical island that’s been enchanting people for thousands of years.

Getting there Fly from London Stansted to Ibiza from £98 return with easyJet.

Can Marca cave entrance is £8.50pp. Aquabus return from Ibiza to Formentera is £25. From £5 to hire a bike on Formentera. For more information on Ibiza visit ibiza.travel 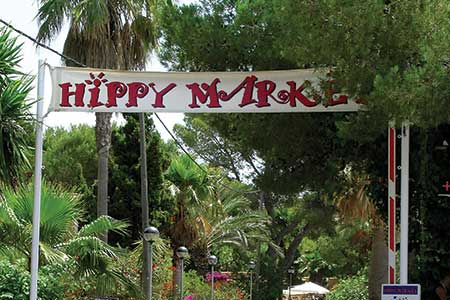 Midrange: For top-notch authentic Spanish cuisine, head to Sa Carboneria in Ibiza City. Run by a husband-and-wife team, the atmosphere is laid-back and romantic with candlelit tables and al fresco dining in an intimate garden. Very chic. Mains cost from £17.

Luxury: Fast becoming the most popular restaurant on Formentera, Can Carlos is idyllic – sublime Italian food served al fresco under fairylight-decorated trees and with first-rate service. It can be pricey and reservations are recommended. Meals from £40. 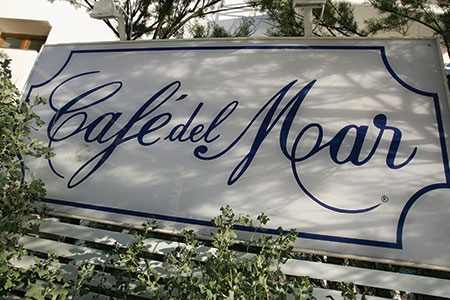 Budget: Watch the sun set over the waters of San Miguel at the relaxed Port de Balansat. Quench your thirst on the terrace of this fish restaurant with a San Miguel beer or a decent quality glass of wine for just £2. For a casual night out, you can’t beat it.

Midrange: For those wanting to experience legendary Ibiza, a sunset drink at Café del Mar (above) is a must. First opened in 1980 and later releasing the now-famous  Café del Mar chill-out compilation albums, this place is an institution and can get pretty crowded. Drinks start at £5.

Luxury: Infamous club Pacha lives up to the hype, but be prepared to pay a pretty penny for one of the most popular club nights out … in the world. Entry starts at £40, beers from £2 and basic spirits with mixers are from £15. 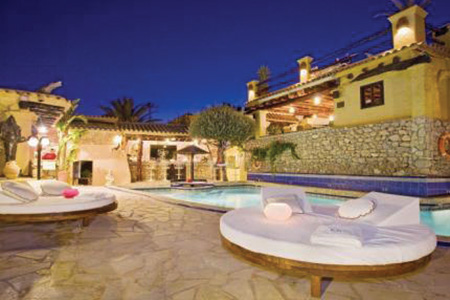 Midrange: Located in San Antonio Bay (where most of the nightlife action happens), Reco Des Solo is just a few minutes from the beach and has an outdoor pool and terrace. The apartments are fully equipped with a kitchenette and the rooms are clean and pleasant. From £60pn.

Luxury: Ibiza Rocks House at Pikes Hotel (above) has an A-list rock’n’roll heritage that includes hosting Freddie Mercury’s 40th birthday bash. It has two pools, a great cocktail bar and is a stone’s throw away from San Antonio. Rooms from £136pn.

Cost of living in the US