The People’s Games – Has the International Olympic Committee become bloated and forgotten its core values?

The corporate lockdown surrounding the Quadrennial International Sports Event has been making headlines all week.

First, The Olympic Chip Embargo surfaced, after a letter leaked to the media informed caterers that, due to a deal with McDonald’s, individual portions of chips could not be sold in the Olympic Park, unless accompanied by a slab of fish (yes, really).

The Chip Embargo was later relaxed to allow staff working on the park to get their hit without having to enter between the golden arches. But the bad publicity didn’t stop there.

On Thursday, the Daily Mail reported a perplexing list of items to be banned from the Olympic Park: bottled water, Che Guevara T-shirts, sports equipment, ‘excessive’ amounts of food, and DLSR cameras with disproportionate zoom.

Critics slammed the Games for “turning into a sponsored security show”. But are these actions a justifiable way of making sure the corporations backing the Games get a fair cut?

Or are they indicative of an organisation which has lost its way and an event whose sense of importance has become completely disproportional? 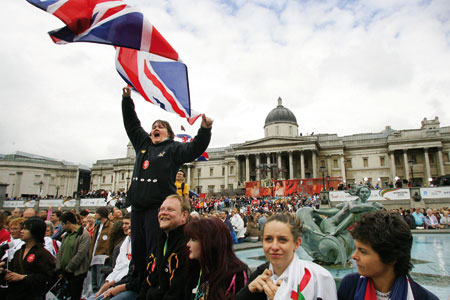 Dr William Penny Brookes, a Victorian-era social reformer, and father of the modern Olympic movement, created the Much Wenlock Games “for the promotion of  moral, physical and intellectual improvement” in 1850.

Sadly some of the more colourful events – the wheelbarrow race and the ‘old woman race for a pound of tea’ – haven’t survived to today’s iteration.

The Games as we know them, were created when Brookes met Frenchman Baron Pierre de Coubertin, who believed organised sport was a great tool for nation building. Together, Brooks and Coubertin created the International Olympic Committee (IOC) and the first modern Olympics were held in Athens in 1886.

The transformation of the Games from a fairly modest, naive organisation, to a multinational making billions in tax-free yearly revenue, is largely credited to Spaniard Juan Antonio Samaranch.

A former fascist party member and a banker, whose only sporting experience came during a brief stint as a sports reporter for Spanish newspaper La Prensa, Samaranch was appointed head of the IOC in 1980.

He revolutionised the organisation, taking on international sponsors and allowing professional athletes to compete, leading to a boom in the price of the Games’ TV rights. 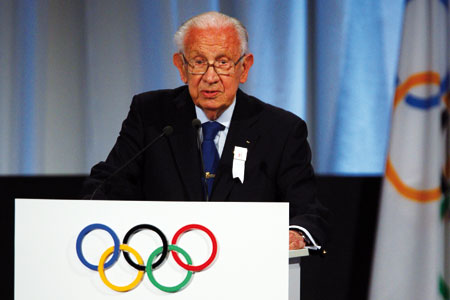 Samaranch took the Olympics from a point in the Seventies when the Games were such a financial burden on the host country that bidders were few and far between, to the point where were cities so desperate to host the Olympics, they were willing to go to extreme, and dubious lengths, to woo delegates’ votes.

From Amsterdam’s bid committee allegedly enlisting the help of two prostitutes for IOC members, to Atlanta’s bid committee paying the tuition fees of a fictional daughter of a Sudanese general, the gifts lavished on IOC members by bid committees were as diverse as the sports at the Games.

A 2006 investigation discovered that the Nagano delegation spent £3.2m on entertainment alone for IOC delegates, and, perhaps most amusingly of all, The Salt Lake committee doled out ‘immense amounts’ of Viagra to two delegates, according to Michael Joseph Gross writing in Vanity Fair.

Samaranch denied any knowledge of the corruption and implemented new ethical guidelines, though he personally remained under fire for questionable IOC appointments, including the Idi Amin’s former defence minister. 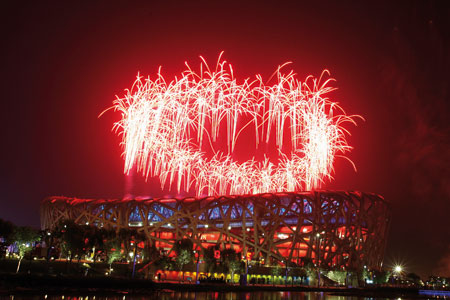 London has the luxury that its indiscretions will all appear minor relative to its predecessor, the Beijing Games, described by human rights groups as directly contradictory to the Olympics charter.

Many suggested that giving China the Olympics to an extent legitimised her continuing support of repressive and totalitarian regimes in North Korea, Zimbabwe and Sudan, and glossed over the ongoing dispute over Tibet.

A scandal over the age of China’s athletes and rumours of state-sponsored doping programmes continued during the Games. And it was even suggested that the recall of poisonous milk powder, which killed six children, was postponed until after the Games to avoid bad publicity.

However, London 2012 has been dogged by problems from the outset. The initial budget of £4bn has ballooned to more than £13bn, the cost of tickets and the proportion going to corporate buyers has been an ever-present issue.

The list of sponsors reads like a who’s-who of unpopular multinationals. From peddlers of fatty kid’s snacks, McDonald’s and Cadbury’s to Dow Chemical, the company responsible for the Bhopal disaster, one of the worst (and least atoned for) industrial catastrophes ever.

The activist group Counter Olympics Network has called the Games a “showcase of class privilege, corporate power and security wonkery,” inteneded to be little more than a corporate “branding exercise” for its sponsors.

London 2012 was sold on its legacy, but how many corporate types will be in attendance for every east London kid – the people this Games was supposed to inspire? People’s Games? Or exploitative corporate jolly? 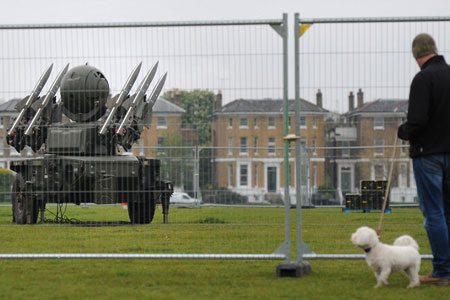 With the Olympic security budget rumoured to be coming in at just less than £1bn, who and what will be guarding the public’s safety during the Games?

Undoubtedly, the surface-to-air missiles have garnered the most public controversy, but the reality is they are merely a back-up.

Any errant jumbo jets must first outrun the Eurofighter Typhoon aircraft that will be continually patrolling the sky over the Home Counties for the entirety of the Games.

In addition to 13,000 private security guards and 12,500 extra police officers, 13,500 military personnel will be on security detail.

SAS teams will be permanently based around London in order to quickly nullify the threat of Mumbai-style attacks.

The Royal Navy’s largest ship, HMS Ocean, will be moored in Greenwich, providing logistical support for Thames marine units and a base for helicopter teams.