The Secrets of Hogwarts: The Making of Harry Potter Tour

What do you do when you’re the proud owners of one of  history’s most successful movie sagas – one that has swept box offices around the world to the tune of £4.89bn and one that no amount of Twilight emo-pouting and shiny-skinned vamp-posing could hope to match in its wildest dreams – but have mined the source material to completion?

That was the question facing Warner Bros when Harry Potter And The Deathly Hallows Part II (movie number eight) was wrapped. It responded by opening the doors to the franchise’s studio HQ, to offer Harry-heads the chance to
see the sets where the magic happened. Up close, Hogwarts’ inhabitants and their practices are just as spellbinding as you’d expect. 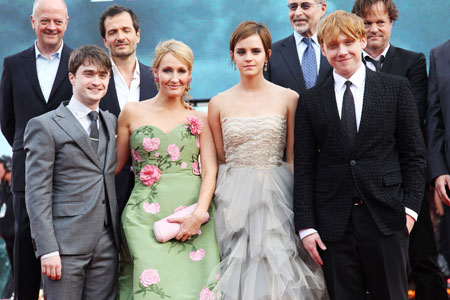 At a gargantuan warehouse just outside London, The Making Of Harry Potter, Warner Bros’ (Hog)’warts and all’ tour of the fantasy franchise has come alive.

Certainly, it is this craft that the tour celebrates. Opening in a multi-screened room that reveals how a train journey to Manchester inspired an aspiring writer called Joanne to put pen to paper, the tour then documents the ensuing Potter-mania that gripped every corner of the planet (one of the movies’ producers David Heyman originally envisaged it as just a ‘modestly budgeted British film’), before moving into a cinema where Daniel Radcliffe, Emma Watson and Rupert Grint introduce the secrets about to be revealed.

Soon after, Hogwarts is entered through an imposing door, behind which are more costumes, props and even goblin beards than you could shake wand at.

“It was such a magical place to grow up,” Daniel Radcliffe, says of the Leavesden studios. “People will be amazed to see the incredible sets that we’ve worked in all these years.”

You can walk along the enormity of the Great Hall where Harry and co gobble their grub (world leaders have been shown through here, apparently), squint at the retina-burning pinkness of Professor Umbridge’s private quarters, and almost reach out and touch the potions books and Hogwarts sword that decorate Dumbledore’s majestic office. 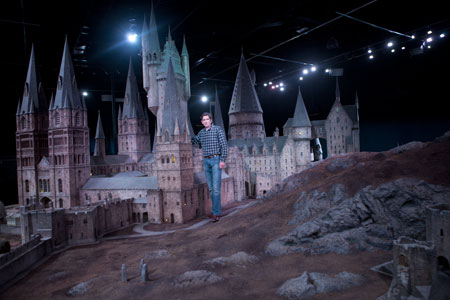 It’s ‘use your eyes only only’ though, as, while the Great Hall is open for the public to walk down (so too the shopping street Diagon Alley ), the majority of the sets are roped off. While you can peek at the warm, rosey Gryffindor common room (it’s smaller than you’d think), and Hagrid’s oversized Hut, you’ll have to make do with walking past – not over –  Hogwarts Bridge, and won’t be concocting any spells or potions of your own (although the potion classroom – which doubled as the monstrous beast Fluffy’s closet in Chamber Of Secrets and Snape’s office further down the line – does come with its own self-stirring cauldron).

Elsewhere, an 18-foot Aragog – to the unindoctrinated, that’s a spider so giant it would make even King Kong himself shit his pants – hangs from the ceiling.

While this is admittedly unpalatable, particularly for arachnophobes, it pales in comparison to the sight of a wall of beheaded Warwick Davises (Griphook), which greets tour-goers as a collection of casts in various stages of development, looming increasingly lifelike out of the darkness. Indeed, the tour’s creature effects serve to remind just how many critters and beasts were conjured up by the franchise – for every cutesy and wholesome Dobby the house elf (the little one that shuffles about doing housework with a grating accent), there is a wealth of snake-haired demons, Dementors and three-headed dogs to boot. 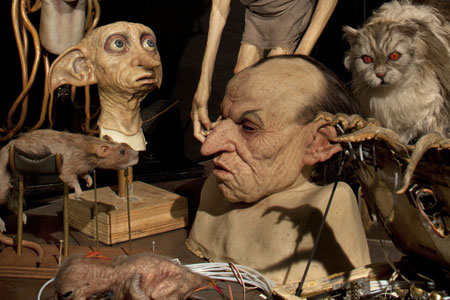 As Radcliffe, again via video, promises at one point, this tour will forever make you look at Quidditch in a different way, and it’s a pledge he keeps, as a green-screen feature allows you to film your own broomstick flight across the golden-snitch-chasing game or even the streets of London.

As fun as all this is, what really stands out from the tour is the detail, firstly contained in the bountiful anecdotes and asides, and also in the spirit in which the films were made.

“The sets all have tiny little details that you may not always notice in the films,” Rupert Grint says. “But when you actually walk through them, you can see all the work that’s gone into it.”

This is the work that had some poor prop maker engrave the Golden Egg, that had a carpenter handcarve the Goblet of Fire from a single English elm and that led to some runner affixing the teeth clasps on spell books. Grint’s right, these details don’t even show up on the screen for most of the time – hell, it could have all been made out of plastic and polystyrene and spraypainted at the last minute with the aerosol fumes still chaffing in Radcliffe’s nostrils, and the audience would have been none the wiser. 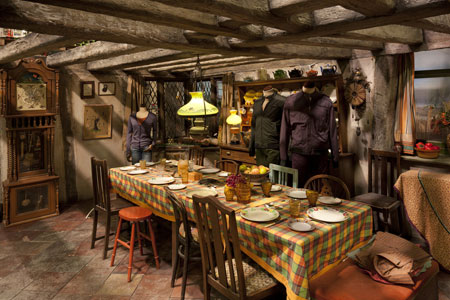 In keeping with the ‘big happy family’ vibe – Watson, Radcliffe and Grint went to school on the set in the early days when they were 10, 11 and 12 years old respectively – Ollivander’s Wand Shop is recreated, with each of the 3948 wand boxes that line the shelves bearing the name of every person credited in the production of the film, from Rowling, John Hurt and Gary Oldman, to Alan Watts, David Yates’ driver and props man Pierre Bohana.

As a museum to the series, it is painstaking, the sets (the real draw here, that or the sugary-sweet ‘butter beer’ you can sample) giving Potter fans a chance to get up close and personal with the magical world they love.

As a monument to the filmmaking process, it is engaging, a living, breathing DVD extra, if a little heavy on the ‘show’ and light on the ‘tell’. For those for whom Potter was the kids’ book they couldn’t understand grown ups reading, this experience won’t change their minds. ❚

Does the spark go out of your relationship once you get married?