We hope you have a head for heights because some of these buildings are serious, especially in the case of the Burj Khalifa, which took more than 110,000 tons of concrete to build (that’s equivalent to 100,000 elephants, apparently).

When they opened in 1998, the Petronas Towers in Kuala Lumpur, with 88 floors, were the tallest buildings in the world. Today, that title has long been passed on, several times in fact, but it remains a Malaysian icon and the views from the top – a stunning 360° view from the observation deck – are absolutely incredible. The only drawback is that the ticket office opens at 8.30am and provides, on a first-come-first-served basis, a limited number of tickets for that day, so arrive early (some get there as early as half six!) because it’s like trying to get tickets to a free Prince concert (you think we’re joking?).

For a cracking view of the Towers themselves – they’re a lovely looking pair too – head across to the Traders Hotel and its SkyBar perched on the 33rd floor. Sit back, enjoy a few drinks and take it all in. It is majestic. Entry to the Petronas Twin Towers is RM80 which works out at about £14, so hardly pricey. If you don’t mind camping out like tennis fans at Wimbledon it’s well worth it because at 452m high, the iconic towers are officially the world’s tallest twin building. Double the fun. If you are brave enough, you can also tackle the Skybridge that links the twins. At 170m above ground, it’s the world’s highest double-deck bridge and offers superb bird’s eye views of the city. Click here for more info.

The tallest building in the world naturally offers one of our top five city views, particularly as the city of Dubai looks like the future. The centrepiece of downtown Dubai, it’s a real draw for tourists who are fascinated by how the hell they managed to build something so big (830m!). The observation deck is on the124th floor – although that’s actually only the third highest in the world. Click here for more info.

We were tempted to go for the new One World Trade Centre at number three but you don’t get more iconic than the Empire State Building do you, so how could we leave it out? You just can’t beat this building, which was the world’s tallest from 1931 to 1973, boasting an 86th-floor observatory and spectacular views of New York City and beyond. Head to the roof for an ‘Affair to Remember’. Click here for more info. 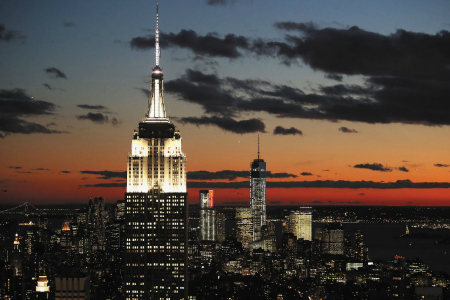 At 328m high, Auckland’s Sky Tower is the tallest structure in the southern hemisphere and, not only are the views from the top great, you can also jump off it! Yep, this one is for all the adrenaline junkies out there, home to New Zealand’s highest jump, a base jump by wire which offers a gentle introduction to an extreme sport. Great views and adventure? We approve. Click here for more info.

Last but not least, we have the Orbit, a feat of modern engineering that looks a lot like a giant Meccano. Don’t let that fool you, there are cracking views of over 20 miles across London from the top. The 114.5m structure has recently re-opened and it’s a tantalising mix – both playful and entertaining, and a hybrid of art and architecture. Sadly it doesn’t have slides. Maybe they could add some? Click here for more info.

Where to live in London: Vauxhall, SW8