These outlandish festivals are putting this great country on the map, clearing up the Brits’ false reputation as a reserved nation, and showing the world that they will risk pride, honour, and even life and limb in the name of some of the craziest competitive stakes out there. And, as the saying goes, if you can’t beat ’em, join ’em, so here are our top five obscure UK festivals for you to check out and get stuck in!

In this egg-citing event (come on, we had to), competitors from far and wide flock to Swaton, the ‘birthplace of eggthrowing’, to battle it out in Russian egg roulette, egg trebuchet, target throwing and more. The proud tradition of chucking eggs around is said to date back to 1322 when the newly appointed Parish Abbott would give an egg to peasants attending church services. When the River Eau flooded, monks would hurl the eggs over the river to the waiting crowd. Risky.

It’s been played in the village ever since and is now officiated by the World Egg Throwing Federation, who take it so seriously that they have been championing to turn it into an official sport – something which, sadly, was rejected by Sport England back in 2011. 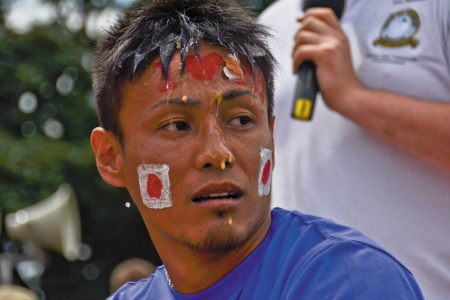 Challenges include the egg trebuchet challenge, where players hurtle eggs at each other from a catapult, and egg target throwing, which not only encourages players to take aim at a human target, but even awards extra points for hitting certain areas, like the groin.

In Russian egg roulette, competitors take turns smashing six eggs on their foreheads. Five are hard boiled, but one is raw and so the loser literally ends up with egg on their face. Along with bragging rights, winners take away chocolate egg awards. It’s estimated that 300-400 eggs are used in the festival every year, but what to do with the leftovers? Why, pelt them at one unlucky individual chosen to run and dodge them like bullets of course!

Britain’s filthiest race takes place in its smallest, but not sanest, town of Llanwrtyd Wells in Wales, and consists of a mad dash through 120 yards of peat bog to see who can swim it the quickest. No recognised strokes are allowed and swimmers can only lift their heads for orientation. The mad idea began as expected – in the pub. Bog Snorkelling founder Gordon Green cooked it up with some boozer regulars in 1976. Green-events.co.uk

In this mouth-stinging competition, contestants gather at Dorset’s Bottle Inn Pub to see who can devour the most raw stinging nettles in an hour. Beer is in full supply to help swig down the spiky beasts. It started as a bet in 1986 when a local farmer boasted that he would eat his giant-monster-nettles raw if anyone could produce longer weeds. He was forced to eat his own words, and nettles. Bottle-inn.net 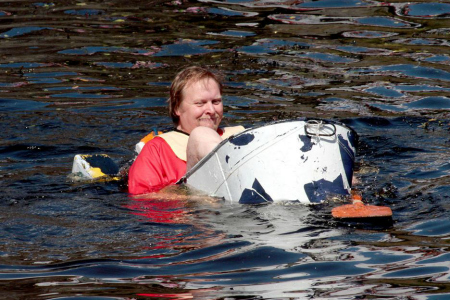 Rub a dub dub, racing in a tub. Every year Castletown in the Isle of Man polishes off its old tin baths, throws them into the Middle Harbour and paddles frantically across 400m for a taste of victory. The first person to reach the finish line – or cover the furthest distance without sinking ship – wins. Luckily, Isle of Man Search and Rescue is on hand to prevent recreations of The Titanic. Castletown.org.im/tinbaths

This competition will literally knock your socks off. Players face-off at a ‘toedium’, lock toes and wrestle until they knock their opponent’s foot over or pin their digits in a toe-down. The game was born in a Wetton pub (surprise surprise) in 1974 when four drinkers whined about how rubbish the English were at sport and decided to invent a new one. And don’t worry, stinky cheese feet are verboten thanks to a rigorous toe inspection. Bentleybrookinn.co.uk/events-and-offers

Snowboarding in the Andes