There’s something deeply grounding about visiting food markets on grand foreign travels. It’s one thing to see a place through museums and monuments, and quite another to see it at pedestrian level. Markets are not just a perfect way
to get food, but also to get an insight into how locals shop, haggle, relate and, naturally, how they eat.
Food markets are on every corner of the world, but these are simply some of the best.

Chandni Chowk is the main road of Delhi’s old city, but locals often refer to the area surrounding it by that name. Enveloped by a maze of winding and narrow laneways, Chandni Chowk contains a number of small and not-so-small self-contained markets within its environs. Chief amongst them would have to be the Khari Baoli, or the spice market, a long street where dozens upon dozens of spice vendors ply their wares. Here you’ll find fresh turmeric root, puffed lotus seeds, Kashmiri saffron and Keralan cardamom, amongst more.

Nearby is the Khoya Mandi, or milk market, where you can trawl 70-odd vendors to find the best in just two products: paneer (cottage cheese) or khoya (a solidified milk product).

It’s a Saturday morning ritual for inner-city urbanites and suburban fringe dwellers alike: the trek to Queen Victoria Market (or just Vic Market), string bags in hand, in search of organic vegetables, a free-range duck or simply a brunch of steaming hot churros. For Melburnians with a weekend dinner party in the works, the Vic Market is their go-to destination.

With a vast range of produce and ready-made snacks, from Turkish boreks and fresh Chinese cabbage to German wurst and crocodile steaks, no place in Melbourne better exemplifies cultural the city’s melting-pot nature.

Los Angelenos might prefer to drive than walk two blocks, but they’re fiercely passionate about organic, free-range and local produce. In the popular beachside suburb of Santa Monica, a Wednesday farmers’ market started almost 30 years ago and immediately proved a major success – so much so that ten years later, the market also opened on Saturdays. 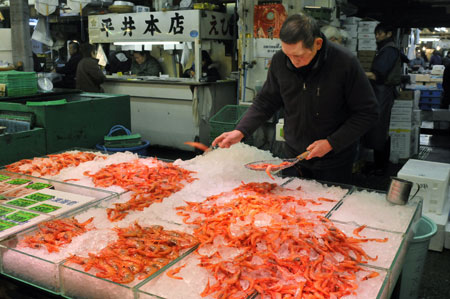 With the Japanese love for the freshest fish possible, it comes as no surprise that Tokyo hosts the world’s largest wholesale fish and seafood market. The market handles hundreds of varieties of seafood – from seaweed and caviar to tuna and potentially poisonous fugu.

Tsujiki also has the reputation of being the most expensive fish market in the world, so visit to see some of the biggest and best-quality fish specimens you might ever come across. Afterwards, try out one of the many 24-hour sushi restaurants outside the market. With pieces of sushi costing a pound upwards each they’re not cheap, but you can be assured that it’s the best money can buy. 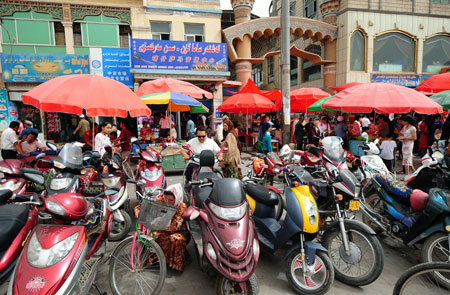 This major pit-stop on the Silk Road, the Kashgar Sunday Market has been going strong for 2000-odd years. The sprawling market – the only real place to shop in the remote western China region – contains
a host of exotic wares, from fresh melons and boiled goats heads to bolts of silk and Uighur hats.

Apart from what there is to buy, Kashgar’s weekly bazaar is also an opportunity for those living out in the desert to catch up on gossip, get a haircut or take in some amateur sport. Kashgar’s population is said to swell by 100,000 each Sunday, despite the difficulties for locals to get there.

The souk, or market, at Marrakech’s Djemaa el Fna main town square is a daily affair. Make your way past the usual carpet sellers and inside you’ll find apothecaries doling out pharmaceuticals from giant glass jars, much like they might have hundreds of years ago.

Outside in the square you’ll find a large open-air market set up with dozens of stalls selling different foods. There are also jugglers, acrobats and kids hawking henna tattoos.

Singapore’s sprawling Chinatown area is often known by its Malay name Kreta Ayer, which translates to ‘bullock cart water’. Duck past the temples and tourist trinket shops and find the wet market – so named as the floors and surrounds are routinely sprayed down.

Mexico City’s central market, Mercado de la Merced, is contained in several huge buildings. Apart from chillies of every shape, size and colour, you’ll find cactus leaves, cactus pears, Mexican spices, corn and more. Built on the site of a former monastery, La Merced was long the city’s major wholesale market. It is a favourite place for many to indulge in Mexican street food such as quesadillas, tostadas and tamales.

Get amongst the world’s best jamon iberico at Barcelona’s home of jamon, La Boqueria market, off Las Ramblas. Just four slices cost upwards of £10, but with each mouthful packed with flavour and a texture as creamy as butter, those four slices can stretch out to three meals.

The market also offers a wide variety of game, as well as fruits and vegetables, wine and deli items. But, really, it’s the jamon that keeps them coming back for more.

Even if you’re not in the market for caviar or blinis, Moscow’s Yeliseyevsky food emporium is worth a visit to check out its spectacular restored Art Nouveau interior, with its crystal chandeliers and gilt-painted cornices. You’ll find food from all over Russia, from traditional jam-filled gingerbread from the city of Tula and Georgian cheese pies to dumplings from Siberia.

Rolling Stones to headline at Glastonbury