One of those is the Golden Gate Bridge in San Francisco.

Its burnt-orange vibrancy in the bright California sunshine, emerging from the Golden Gate Strait’s morning mist, or illuminated at night, has made it one of the most instantly recognisable sights in the US.

The bridge is so iconic in fact, that it’s had a starring role in countless movies over the years; it got destroyed by a giant octopus in Fifties horror flick It Came From Beneath The Sea; a school bus almost fell off the side of it, before being saved by the all-American superhero himself in Superman: The Movie and more recently, in X-Men: The Last Stand, Magneto switches the position of the bridge so that it connects to Alcatraz.

That’s quite a few misadventures over the years.

In real life, many events on the Golden Gate have been almost as dramatic as the movies – it’s the bridge with the dubious honour of having the highest rate of suicides, the recorded figure currently standing at 1200.

Documentary filmmaker Eric Steel was slammed in 2004 when he revealed that he had conned the bridge committee into allowing him to film the Golden Gate for months, telling them he was a making a film “exploring the beauty and mystique of the Golden Gate Bridge” when in fact he was trying to capture suicides on film (he got footage of 23 deaths over a year’s filming).

For most people, of course, the experience of the bridge is a far more pleasant one: three million commuters and tourists cross the bridge each month, and it’s constantly being repainted to make sure its bright paintwork is kept in tip-top condition.

A walk, cycle or drive over the 2737m of the bridge will set you back the very modest sum of £4. Definitely worth it. 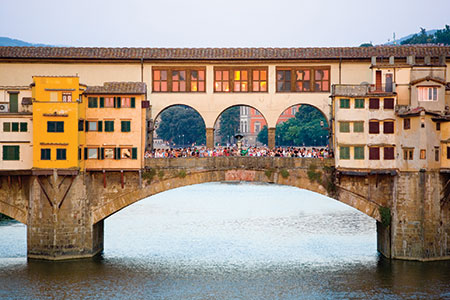 At Ponte Vecchio, the oldest stone arch bridge in Europe, merchants who could not pay their debt had their tables (banco) broken by soldiers (rotto) to become ‘bancorotto’ – so evolved the word we now say as ‘bankrupt’.

The bridge was first built from wood, but was destroyed and later rebuilt with stone in 1345.

Now, the ‘old bridge’ over the Arno River is the only Florentine bridge to survive World War II. 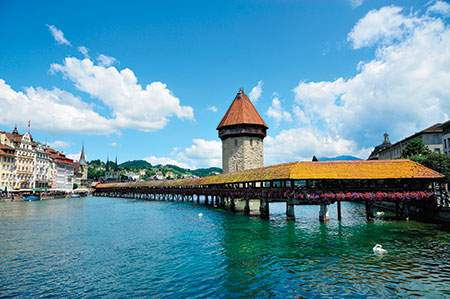 It is named for the nearby St Peter’s Chapel, but this wooden truss in Lucerne is a pedestrian bridge that has become one of Switzerland’s main tourist attractions.

Stretching 170m over the river Reuss, this covered bridge is now the city’s symbol and the oldest structure of its kind in Europe.

Much of what stands today isn’t original as a fire in 1993 destroyed much of it and tragically, the 17th-century paintings inside. 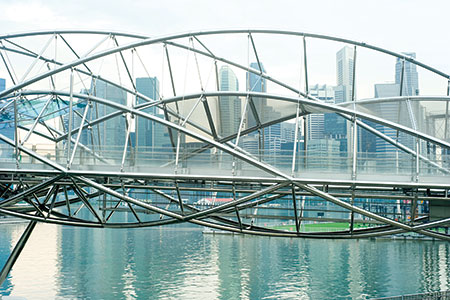 Lefties rejoice: this giant DNA model celebrates the 27 per cent of the population who are left-handed.

This ultra-modern bridge and observation deck opened in April 2010 to link Singapore’s Marina Centre with the Marina Bay in the city.

A walk across it gives you a science lesson as symbols for cytosine, guanine, adenine and thymine, the four bases of DNA, twist around the spiral and are illuminated in red and green at night. Geeky but cool. 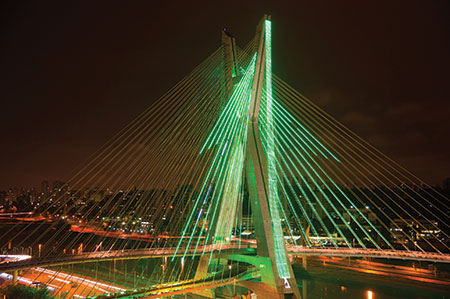 If you thought it would be hard to burgle a bridge, you’re oh-so wrong. The Octávio Frias de Oliveira Bridge (also known as the ‘X’ Bridge) has been robbed three times already.

The structure’s been open less than five years, but in that time, vandals have stolen almost £75,000 worth of the wire, plus broken into the control room to destroy the lighting.

When it isn’t being vandalised, the bridge draws attention for its unique ‘X’ structure with two impressive curved tracks.

Did this real-life romance aboard the Titanic inspire the movie love story?

Joss Stone insists she is fine after foiled attack

Visit Egypt: Is it safe for tourists to return?