Adapted from the 1992 animated film, it’s a feast for the eye with designer Bob Crowley’s intense purples, oranges and greens giving way to a breathtakingly sumptuous, colour-changing cave, dripping with golden treasure and, of course, home to the famous wish-granting lamp.

Trevor Dion Nicholas’s portly Genie (he’s already played the role on Broadway) will either infuriate or charm you, but either way he oozes oodles of personality as he steers Dean John-Wilson’s boyish Aladdin on the road from street rags to royal riches and helps him gain the hand of the Sultan’s daughter, picky Princess Jasmine (former Sugarbabe Jade Ewen) who wants to experience life outside the palace and marry for love. 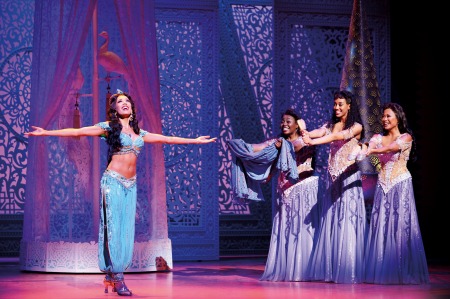 There’s loyal support from Aladdin’s trio of sidekicks, lavish musical numbers including “A Whole New World” and a show-stopping “Friend Like Me”, a liberal scattering of puns, and a not quite hissable villain in the shape of power-hungry vizier Jafar – not to mention a romantic magic carpet ride for the young lovers through a star-filled sky and more costume changes than I could count.

It’s more extravaganza than panto – but hey, it’s summer, not Christmas, and Casey Nicholaw’s American-accented production pulls out all the stops to make this a glittering evening out.

33 reasons to visit Victoria: From shopping in Melbourne and watching the AFL to seeing the Twelve Apostles landmark