Post-Brexit: will the world still be your oyster?

Like it or not, Brexit – big bad wolf/liberating game changer – is on its way. Whatever your opinion, the UK has entered a new landscape, prompting questions about what this change means for the eternal expat. Are we to be forever confined to our island, never again to dream of a continental workplace, or will exotic new lands soon welcome us with open arms?

Let’s start with the basics. There’s at least two years to go on the UK’s existing EU membership, so you can still take a job anywhere from Vossevangen to Vatra Dornei, but here’s the rub: you don’t know where either of those places are. Neither did I until two minutes ago. That’s because Brits take little interest in the majority of the continent’s towns and cities. Sure, we visit them, cooing about their traditional way of life, “and how lucky they are to still be in touch with the past,” but we’re not there to work. No way. Language is the deal-breaker, and that’s as true for Vossevangen (in Norway), as it is for Vatra Dornei (in Romania).

For obvious reasons most of us are far more interested in moving to Australia, Canada, the US, New Zealand, or any other English speaking country, unless you’re keen to pull pints in Benidorm, or wax skis in Meribel. And if that’s the case, will Brexit really have an ‘expat effect’?

Speculation is easy, but it’s likely that little will change, most politicians wanting an EU deal that will allow Brits to continue pulling pints in Benidorm. The real excitement, though, is in potential agreements ‘beyond Europe’. The dream for the eternal expat is the UK establishing movement of labour deals with relatively closed-off countries like the US, Mexico, India, South Africa, Thailand etc. The possibilities are endless, with the hope being that Brexit will one day make it easier for your itchy feet to freely wander the planet. In years to come you may find yourself working in Nepal, as easily as in the Netherlands.

But agreements aside, Brexit won’t change the already numerous place that open their arms to foreign labour. Topping that list has to be the UAE, for the simple reason that every industry, at every level, can hire international staff. Similarly welcoming are the other Gulf states, but all of them share the Achilles Heel of life in a desert: hideously hot summers topping 40+ degrees. If keen for something a tad cooler, try Hong Kong, Singapore, Beijing, or Shanghai, all of which are relatively open to foreign workers.

Down Under is also an attractive option, especially for those of you lucky enough to be 18-30, as you can work in Australia or New Zealand on a working holiday visa. Japan also offers working holiday visas, but it’s a harder place to live due to the obvious linguistic and cultural differences – yet what an adventure it would be. If you can find a suitable job, go for it.

The more you look at it, the more the world really is your oyster, and that’s not even including the ‘unofficial option’ of taking short-term work on a tourist visa. My first job was in Zimbabwe, but I couldn’t arrange a work visa in time, so I ‘unofficially’ worked for five months on a tourist visa. This author and this magazine aren’t advocating such behaviour, of course… but, you know, sometimes you gotta do what you gotta do. On your head be it.

Governments aside, at its most simplistic level, working overseas is nothing more than a state of mind. You and you alone are what’s stopping you from going somewhere and doing something, not paperwork. If you really, really want to make it happen, you’ll find a way: just keep your plans achievable. Wanting to be a barman in Manhattan is a waste of time. They have enough. They don’t need you. Be realistic. Be flexible. Look for places that do want you.

There are expat centres across the globe, and hopefully – fingers firmly crossed – more to come. However the cards fall, options abound.

Or you could always learn Swedish. 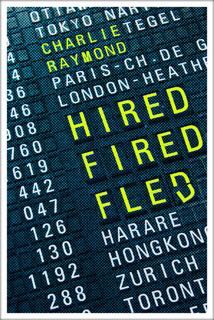 READER OFFER:
Charlie Raymond’s HIRED, FIRED, FLED is available on Amazon for £8.99 in paperback, and £2.99 for e-readers. Message Charlie at hiredfiredfled.com and tell him you saw this article, and he’ll send you a discount code for 20% off.  Be sure to leave a review, and tell a friend!