For more than half a century, prolific playwright Alan Ayckbourn’s output has averaged over a play a year – primarily for the Stephen Joseph Theatre in Scarborough where he was the long-standing artistic director and where this comedy thriller premiered in 1994 before transferring to the West End.

Like much of his work, it’s a mix of clever construction and very dark humour. 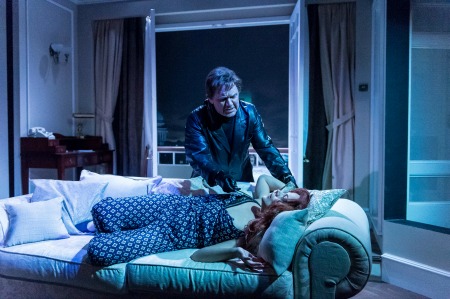 Things get complicated, though, when a fleeing Poopay finds herself in a time warp situation which whisks her back two, then four, decades and she’s reluctantly persuaded to join forces with Reece’s eminently sensible second wife Ruella (Imogen Stubbs on fine, proactive form) to try and change both her destiny and that of his first wife (Lucy Briggs-Owen’s skittish Jessica).

Lindsay Posner’s direction isn’t quite at ease with the comedic moments (a visual gag on a window ledge proves awkward rather than funny) but this is still an ingenious work which keeps you guessing – like the characters, we never know in which era they’ll find themselves each time they go through the connecting door. David Bamber makes a disconcertingly menacing Julian and, in this imaginative combination of various genres from farce to time travel, the aptly named Robert Portal is the privileged Reece who heartlessly arranged for the disposal of his spouses whenever they got in the way.

My Name Is Prince comes to London