Theatre Review: Death of a Salesman

Arthur Miller’s 1949 masterpiece is perhaps one of the saddest plays I‘ve seen – a domestic drama of an ordinary man,  old before his time, who has worn himself out with his misguided quest to fulfil the American dream. Worse still, he’s passed on the traits which blighted his prospects to his two sons.

It’s the story not just of one man’s discontent but that of a whole nation. South African born actor Antony Sher plays travelling salesman Willy Loman with an air of utter defeat, mixed with rage. Flashes of the bluster which characterised his younger self still surface. Suffused with disappointment, immured in a lifetime’s false hopes and self-deceptions, 63 year old Loman can no longer close the deals and is falling apart. 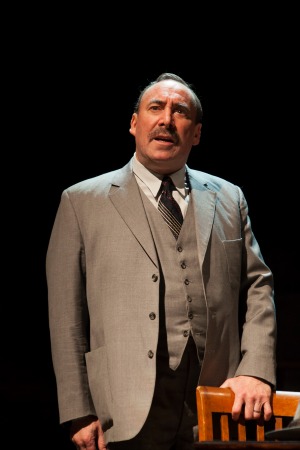 The fractured, time shifting structure of the writing echoes his tortured mental state as his unwaveringly loyal, exhausted wife (Harriet Walter – excellent) defends him against the criticism of his grown up sons – Alex Hassell’s drifter Biff whose light-fingered habits ruined every chance he once had, and older brother Happy, a hard-hearted philanderer.

Played out on Stephen Brimson Lewis’s Brooklyn apartment block set, director Gregory Doran’s production for the Royal Shakespeare Company takes a traditional approach to a classic and,  a century after Miller’s birth, it’s one that still works.

Damage to Rothko’s Black on Maroon ‘much worse’ than feared