Harington’s Faustus starts off as a bespectacled academic in a bedsit invaded by angels and demons clad in disgustingly grubby underwear. In this version, the secrets of necromancy are to be found via his laptop and, under the under the guidance of Mephistopheles (Lucifer’s henchman – or, in this case, woman), he morphs into a rock god illusionist with Derren Brown-like abilities who parties with the US president and the pope, yet is smitten  by his housekeeper Grace.

Director Jamie Lloyd throws everything at it – from conversation-killing music when you enter the auditorium, to Carrie style downpours of blood,  to head-dunking in a toilet, not to mention one character eagerly eating Lucifer’s freshly produced sh*t – and finding it delicious! There’s full frontal nudity early on, Jenna Russell’s Mephistopheles is a sexually voracious harridan, and Tom Edden goes into overdrive to portray the seven deadly sins. 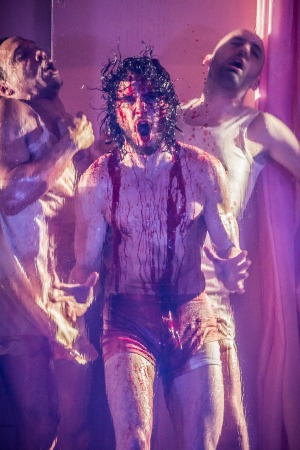 It’s attention grabbing at times, but this continual attempt to shock (in order, one assumes, to draw in a younger audience) proves wearisome. And although Harington gives his all – whether doused in blood or called on, bare-buttocked, to brutally violate Grace – the overall effect is almost as empty as the celebrity culture it mocks.

Three of the best Masterclasses

Tough crowd: Male stripper arrested after becoming involved in a brawl with angry ladies in Wales