Now in its sixth series, the Game of Thrones (GoT) saga is infiltrating everyday conversations. We talk about the epic fight scenes and the beautiful cinematic set locations and some of us have even started declaring “Winter is Coming” (the show’s tag line) as we look forward to what the new series will offer.

The franchise is so popular that it is influencing travel habits and it is reported that GoT alone has boosted Northern Ireland’s economy, injecting around £110 million in revenue in to the country in the last five years. Locations such as the Dark Hedges and Magheramorne quarry, which provided the backdrop for Castle Black, have now become regular tourist attractions.

Many other filming locations including Dubrovnik and Gozo have also gained popularity with fans and holidaymakers alike, who are coveting trips to visit one of the Seven Kingdoms of Westeros.

As the series gains momentum, now is the perfect time to start planning your voyage. To help with this, we’ve teamed up with Bob Atkinson, TravelSupermarket’s resident travel expert, to give you a GoT inspired round up of the series’ destinations…

Dubrovnik, Croatia
Home to Kings Landing in GoT, Dubrovnik acts as the capital of the Seven Kingdoms. A melting pot of corruption and drama, Dubrovnik becomes the playground of King Joffrey after his father’s death.
Despite being one of the most expensive tourist destinations in Croatia, you can get still get value for money if you plan your holiday around the off-peak months of June, September or October, when flights and accommodation tend to be cheaper.

Seville, Southern Spain
Featured in the most recent series of GoT, Seville is the Andalusian capital home to the Royal Alcazar, one of Spain’s most prestigious royal palaces. This city serves as the backdrop to Dorne’s palace in series five, where 550 extras piled in to a bullring in nearby Osuna for the fight between Jorah and Daznak gladiators.The cast stayed at the famous Alfonso XIII hotel during filming in Seville, a hotspot for Hollywood’s stars and widely renowned for its baroque-style courtyard. 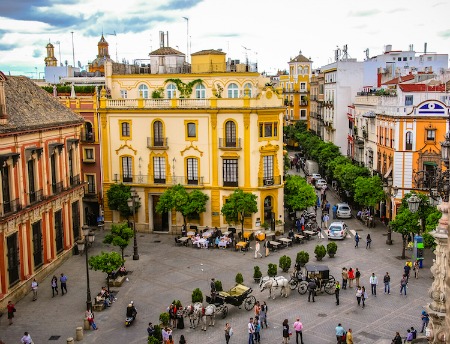 Reykjavik, Iceland
Reykjavik, the capital of Iceland, is the winter wonderland used for filming scenes of the northern lands of the Seven Kingdoms. A haven for sightseers and nature lovers, there is a tour for almost anything, many of which can be booked in advance. Fans can look forward to visiting the cave where Jon Snow and Ygritte had their first intimate moment or go on a tour of the areas where Samwell Tarly and Lord Commander Mormont were attacked by the White Walkers.

Gozo, Malta
Gozo, the sister island of Malta, was chosen for the setting of Daenerys and Drogo’s wedding in the first series where we were first introduced to Jorah.  Internationally renowned for its clear waters and dive sites, GoT used the Azure Window, a 30-metre-high rock formation situated near Dwejra Bay, to film the key scene.
Visitors to the quaint little island can look forward to the bright and colourful festa (the Maltese word for religious and cultural festivals) season, which starts in May and runs through till the beginning of September.

5 Honeymoon Destinations Loved By The Royals