However, Abi Zakarian’s new play is not set in the 60s, rather in contemporary Britain. The playwright challenges us to question whether much has changed in the intervening 50 years since the sexual revolution. Still, today only a tiny fraction of rape cases even reaches the courts.

On the surface Leah’s life seems perfect. She falls in love and then marries the man of her dreams. They go on honeymoon to the Maldives, although she wanted to go to New York, and buy a house with three bedrooms in preparation for their children, despite her being happy in their old flat. Then, on a night out with her girlfriends, she is raped by one of her husband’s friends and her whole life caves in on her. 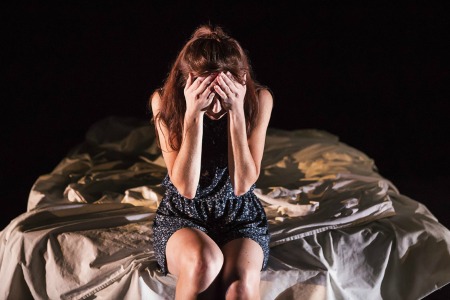 Only that is not Leah’s true story. Where this acutely well-observed one-woman play excels is in going beyond the rape to challenge the traditional roles expected of women, especially from other women.

Leah dreams of working in fashion, landing her perfect job the day she meets her future husband. From that point on her life is controlled and manipulated by him, while she tries and fails to conform to the conventional perceptions of how a woman should behave.

Director Tom O’Brien describes Leah as everywoman, someone who is painstakingly ordinary. For him, this is what makes the play interesting. Most people who go to watch Fabric will have met a Leah at some time in their lives; her idea of a relationship is a night in with a curry, and of a night out singing karaoke with her mates.

Nancy Sullivan excels in a demanding role. She provides Leah with an exuberance and vitality that is at once attractive and vulnerable, endowing the character with an absolute honesty that keeps the audience enthralled throughout.

Fabric is playing at The New Wimbledon Studio until 14 July, then transferring to The Hawth Studio (20 July) and the Marlowe Studio (21 / 22 July), before showing at the Iron Belly at the Edinburgh Fringe from 4 to 28 August.

Watersports in the Scottish Hebrides