Based on Danny Rubin’s 1993 film starring Bill Murray (but, to my mind, much more fun) his own stage adaptation – with music and naughtily witty lyrics from Aussie Tim Minchin – sees the supremely arrogant Phil stuck in snowbound Punxsutawney, Pennsylvania, at the beginning of February. Sent to cover the annual Groundhog Day ceremony, he wakes up the next morning – and every morning after that – only to find himself trapped in a repeating time loop of February 2nds. Confusion turns to realisation, and realisation to opportunism as he shamelessly exploits the possibilities of behaving abominably without repercussion – no-one else has any recollection of what happened the day before, including his producer Rita (Carlyss Peer) whom he is determined to bed. When despair and despondency eventually set in, even suicide proves impossible. 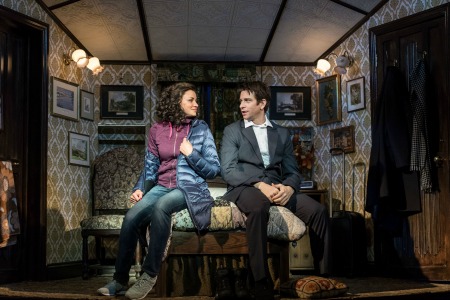 The sets are often as pretty as a snowstorm globe, the choreography lively and Minchin’s music embraces country and western, blue grass and ballads (there’s a standout solo number from Georgina Hagen’s unloved Nancy).

And at the ever-revolving, ever-repeating centre, American Andy Karl is perfectly cast as the charismatically obnoxious weatherman, oozing a smarmy insouciance until, finally, redemption and a golden sunset beckon. The only thing missing is a real live groundhog, but a well-deserved Broadway or West End transfer must surely be on the cards for Matthew Warchus’s skilfully fluid production.

Save money with deals at Pizza Hut, Original Source and Bankside Health Club