Robert Hastie’s production of the Bard’s Henry V could hardly be more different – the set is a bare raised metal grid, the costumes understated and modern dress, and the darkening night sky a chilly echo of what the warring king’s soldiers must have experienced – far from home and huddled round campfires – on the eve of a bloody battle to claim France for their sovereign. 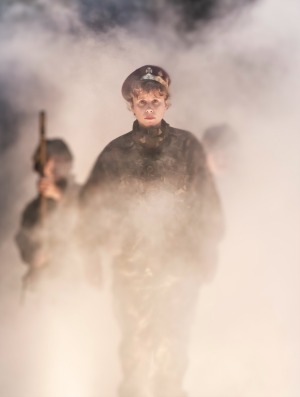 This is a unisex army – and at the helm is Michelle Terry’s tousle-haired Henry, the bright red lipstick she initially sports as she’s unexpectedly handed the crown (by Charlotte Cornwell’s clear, measured Chorus who guides us through the proceedings) wiped clean. As the campaign continues, she grows in stature as a monarch, and soon her gender matters little – her former drinking companion is executed, riddled by bullets on her command, and the traitor, Lord Scroop, swiftly condemned before she exhorts her men to go “once more unto the breach” and the timpani of battle finally silences the birds trilling overhead in the trees.

The argumentative Welsh, Scottish and Irish captains are all played by women and, on the whole the genderblind casting works – though having a lanky male as the French Princess Katherine irks somewhat in an otherwise successful interpretation of a historical event which, by holding its press performance on the night before Britain voted to leave the EU, emphasised how tricky relationships between countries – and their leaders – can be.