Well his performance as the theoretical physicist who aimed to create a device to end not just the Second World War but all wars puts him way up there with the big boys.

Right from the start, he captures the charisma – and the complexity – of J. Robert Oppenheimer in Tom Morton-Smith’s engrossing, well researched new play for the Royal Shakespeare Company which follows the American scientist’s career from popular influential professor at Berkeley to the dropping of the nuclear bomb, code name “Little Boy,” on Hiroshima in 1945. 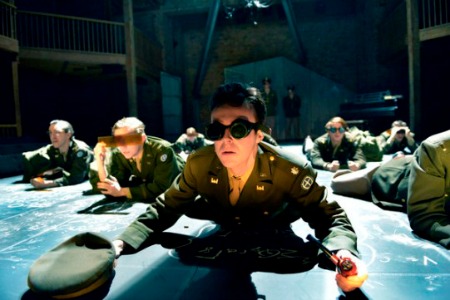 Students and researchers scribble complicated equations on blackboard walls and floor, then shift suddenly to wild partying in Angus Jackson’s fluid production.  There’s some clearly explained physics to keep you on your toes, but the focus is primarily on “Oppie” himself as he heads up the Manhattan Project in Los Alamos, New Mexico.

The exhilaration of scientific breakthrough, the steely discipline and the personal sacrifices he was prepared to make (although he distanced himself from his card-carrying Communist friends, his socialist leanings were still of concern to the US government) all contributed to a character driven to succeed despite the terrible human cost. 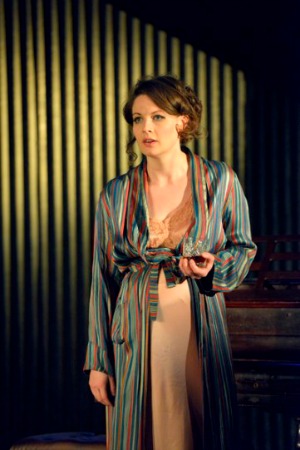 There’s strong support from Catherine Steadman as the volatile Jean Tatlock with whom he had a relationship before (and probably during) his marriage. But with a busy cast of twenty and a profusion of short scenes, it isn’t always easy to keep track of who’s who among the minor characters –especially as, although one might not always like him (how many new fathers would try to offload their baby onto another couple?) one’s eyes are always drawn to Heffernan’s Oppie whenever he’s on stage.