She’s the irresistibly floppy-eared, flexi-trunked handiwork of Finn Caldwell and Toby Olié from the team responsible for the stunning life-style puppets which made War Horse such a long-running hit – and their latest creations don’t disappoint.

Samuel Adamson’s adaptation of Michael Morpurgo’s 2009 novel for children races through a host of events in under two hours as young Will (or Lily on some nights) is saved from the 2004 tsunami whilst holidaying in Indonesia after the death, in Iraq, of his much-missed soldier father.

His mother is washed away, but Will (at the performance I saw, an impressively confident Joshua Fernandes who shares the role with a couple of other youngsters) is carried deep into the rain forest on the back of a charging Oona. There he encounters a prowling tiger, a frightening crocodile, and a whole troupe of orangutans whose habitat is being destroyed to make way for palm oil – as well as the unscrupulous Mr Anthony and his gang of poachers. 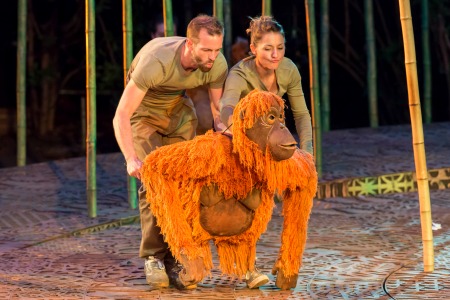 The production looks lovely – with a flock of diaphanous birds flown overhead as the evening darkens and the insistent drumming of a tropical downpour cleverly recreated by the members of the sizeable young people’s ensemble who also manipulate the all-enveloping tidal waves which flow from the stage.

The dialogue isn’t exactly inspired, and the environmental messages hardly subtle, but go for the staging – and especially the incredibly lifelike, if somewhat flatulent, Oona – and you won’t be disappointed.