Theatre Review: The Boys in the Band

It’s Harold’s birthday and half a dozen of his gay friends have organised a party for him. There’s previously married teacher Hank (still determinedly passing as straight) who arrives, mid-argument, with his promiscuous live-in boyfriend Larry (Ben Mansfield), Donald (Daniel Boys) who can’t decide what to do with his life or where to live it, doubly discriminated against African-American Bernard (Greg Lockett), and James Holmes’ outrageously flamboyant Emory for whom the word camp could have been invented as he sashays around host Michael’s East Side apartment with its posters of Marilyn Monroe and Bette Davis. 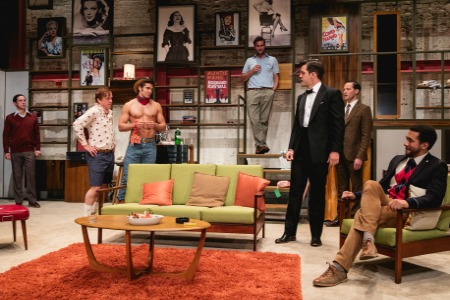 The unexpected arrival of Michael’s former college roommate Alan (a hunkily masculine, deep-voiced John Hopkins in a tux) who knows nothing about his old friend’s sexual orientation, serves as a catalyst which, with the help of too much booze turns the celebrations decidedly nasty.

There’s something distinctly formulaic in Crowley’s attempt to include as many stereotypes of homosexuality as possible – Mark Gatiss’s Harold is a self-proclaimed “42 year-old, ugly, pock-marked Jew fairy” with a slight mince to his step and a bitterly sardonic tongue; his birthday gift from Emory a half-naked Cowboy (Jack Derges) who’s all body and no brains. But, almost 50 years down the track, Adam Penford’s revival (though somewhat dated and certainly no longer shocking) is still an often very funny, frequently touching account of lives lived under the constant shadow of disapproval – and worse.

The Easter Film Hop: Carpark screening of Grease, Dirty Dancing and Purple Rain at The Book Club in Shoreditch

Fight the hike: With energy prices rising, the experts tell TNT how to cut costs and save money