He plays (with charismatic vigour) Macheath in Dougal Irvine’s updated take on John Gay’s 1728 The Beggar’s Opera which, two centuries after it was written, was also the inspiration behind Bertolt Brecht and Kurt Weill’s The Threepenny Opera. (A revival of the latter is currently previewing at the National Theatre).

Irvine sets his enjoyable new musical in 2012 as London hosts the Olympics but the promised rejuvenation just isn’t happening. Instead of a jailor, Lockitt is here a floppy-haired mayor under the influence of David Burt’s corrupt media mogul ‘Peachy’ Peachum, an expert in making truth from lies. Each has a daughter and YouTube sensation Macheath has screwed them both and then married Polly, though it’s Natasha Cottriall’s over-indulged Lucy Lockitt (strutting her stuff with scene-stealing sassiness) who’s up the duff. 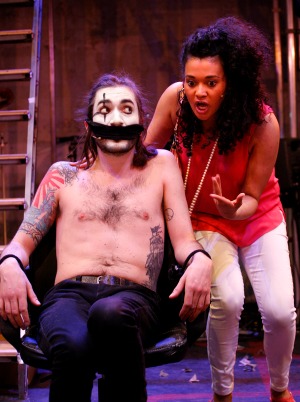 Irvine has a witty way with lyrics and with the dialogue’s clever rhyming couplets. And although his plotting – and his satire – tend to lack focus, all in all this proves to be an exuberant, fun-filled evening under Lotte Wakeham’s lively direction.