Acting dynasties are out in force this summer – John and Lex Shrapnel are currently playing father and a trio of cloned sons in a taut revival of Caryl Churchill’s A Number  at the Young Vic, Dear Lupin (adapted from letters between a father and son and starring James and Jack Fox) opens next week and now, in Andrew Keatley’s accomplished new play, Alexander and Tom Hanson are joined by Jane Asher and her daughter Katie Scarfe in a production which deserves a much longer life than the scheduled  month long run.

It’s Easter 1997 and the Pennington family – including estranged daughter Alice (Scarfe) – are gathering together for the first time in 17 years to celebrate the increasingly tetchy William’s 75th birthday at his comfortable country home.  His memory – and his health – aren’t what they used to be, so it’s left to his long-suffering wife Olivia (Asher) and their younger son Giles (a middle-aged doctor) to hold it all together. Giles’s autistic older brother Samuel (Nick Sampson) may have created an impressive celebratory cake, but it’s questionable whether he’s prepared for the fact that it will soon be going under the knife. There’s tension in the air, too, between Giles and his wife, and their children – Simon (talented recent drama school graduate Tom Hanson) and teenager Emily are constantly baiting each other in the way only siblings can. 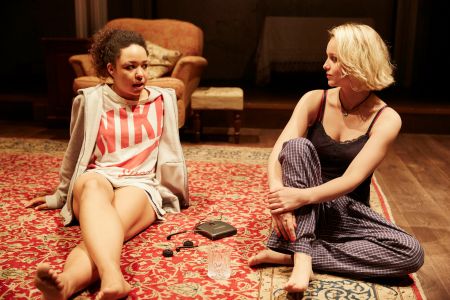 Keatley writes with wit and understanding and the excellent cast do him proud – with Hanson senior moving in his fierce loyalty to his troubled brother and Clive Francis obnoxiously opinionated as William. It takes a while to sort out the relationships (partly because Asher simply doesn’t look her age) and the interval is misplaced – but otherwise Antony Eden’s sympathetic production of this family drama is one of the highlights of the year so far. See it while you can.

A Recruiting Strategy to Reflect the Times