Theatre Review: The Importance of Being Earnest

If you’re in the market for a traditional take on family secrets, then catch David Suchet (of Poirot fame) ditching his trademark moustache and all trussed up in a corset instead to play an ample-bosomed Lady Bracknell in THE  IMPORTANCE OF BEING EARNEST , Oscar Wilde’s enduring 1895 comedy of manners and muddled identities among the privileged classes. 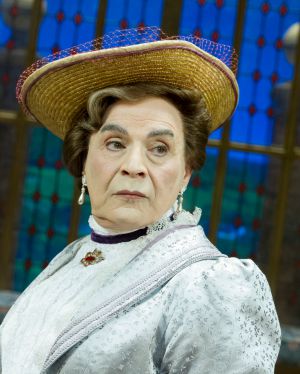 Instead of an OTT Dame Edna style interpretation, the always reliable Suchet opts for a more restrained approach of pursed lips and disapproving looks as he oversees a pair of amorous young couples whom you just know will end up together right from a rather sluggish start. Adrian Noble’s visually attractive period production then trots along pleasantly enough, though, and Imogen Doel is a sparky delight as a naïve, diary-keeping and very determined Cecily.

THE IMPORTANCE OF BEING EARNEST

3 of the best Irish Pubs in London

Water For Elephants – review and trailer