Now the chameleon-like  Bertie Carvel is taking on the central role in Eugene O’Neill’s 1922 anti-capitalistic expressionistic drama which, in 90 minutes and eight scenes, travels from the testosterone-filled boiler room of an ocean liner to New York’s swanky 5th Avenue and beyond.

Carvel plays Yank, a muscular stoker who is king below deck. When confronted by the horrified reaction of the pristine daughter of a steel magnate, though, he finds himself questioning his place – and worth – in society. 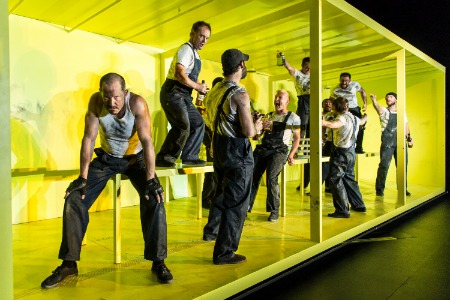 Strikingly staged (there are bars everywhere in Stewart Laing’s stark design with its luminescent yellow cage of a stokehold) and performed with a powerful, rhythmic physicality, Richard Jones’ memorable production makes a strong visual – and visceral – impression. On board, the stokers shovel coal in sweaty unison, their faces blackened by coal dust. In Manhattan, the features of the church-going toffs whose manners bewilder and infuriate Yank are masked in white. There’s no place for him in the Union and, even at the zoo, an encounter with a (very realistic) gorilla brings only temporary comfort.

The words sometimes get mumbled, but an almost unrecognisable Carvel is truly compelling – swinging from girders, prising his way out of jail with brute force, he’s a hulk of man increasingly perplexed and angered by a changing world which no longer makes sense to him.