Supervisory dinnerlady Joan has been married to Tom, a plumber, for over thirty years – and he’s just confessed to a one-off shag with a much younger woman he met by chance in a hotel bar when he stopped off for an after work drink or two. Deeply hurt, Joan can’t understand why he did this instead of talking about what has been missing in their relationship for, obviously, far too long.  Meanwhile Tara is understandably upset that her boyfriend Peter is out every night earning money as a male escort – the prospect of a bigger bank balance is no consolation for evenings alone. 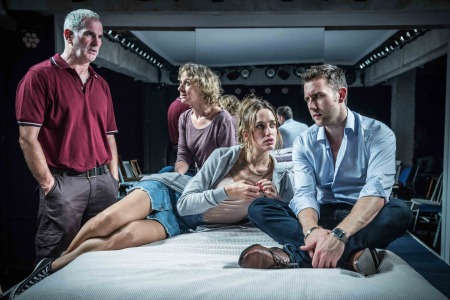 The relationship of the younger couple (Matthew Lewis who played Neville Longbottom in the Harry Potter films and Ruta Gedmintas) is sketchily drawn and (like the plot coincidences) doesn’t entirely convince. But Sean Campion’s worn Tom is completely credible as a man in his fifties who’s afraid of living, and Niamh Cusack’s superb Joan is blisteringly angry, touchingly vulnerable and bitterly resentful as a wife whose marriage has been going down the drain for years but which may, just possibly, be salvageable.  Adam Penford’s almost voyeuristic production, the set dominated by a large double bed, is worth seeing for their performances alone.