Experimental writer and director Anthony Neilson couldn’t have been too sure either – as with previous work, his new comedy was created in the rehearsal room and, rumour has it, lines had not yet been learnt by the time previews began earlier this month.

The final result still seems, in some ways, a work in progress – but the actors involved (no scripts in sight now, but sometimes, probably deliberately, corpsing) certainly seem to be having fun. And despite some reservations, it certainly made me laugh out loud more than once – especially when Jonjo O’Neill’s way OTT Ivan “The Brute” (all declamatory swagger and peroxide blond hair) arrived to further disrupt the proceedings.

The starting point is a Palme D’Or winning director’s search for the perfect light to illuminate his next film, a post-apocalyptic project – “Child of Ashes” – which he’s been working on for a decade. Smith’s petulant, hypochondriac Maxim is prone to childish meltdowns but is also determined to get what he wants, insisting on a costly change from digital to film part way through the shoot. Hisloyal, long-suffering, producer Anastasia (a classy Amanda Drew indulging in secret, stress-busting sex with Richard Pyros’s director of photography Carl) somehow always manages to come up with the goods. This time, though, the additional finance is contingent on the presence of a high level, but deaf, observer (Genevieve Barr) who arrives on set to keep an eye on where the corporate money is going. 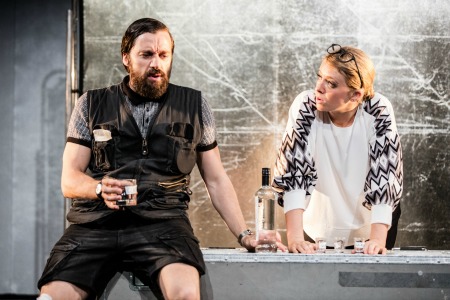 Big Trip: China in your hand

Get active in Andorra