Now with added music and lyrics by David Kirshenbaum, it’s a sweetly sung journey in search of the elusive American Dream which takes the girls from high school in 1963, to college five years later, through adult relationships in 1974 and finally to a funeral.

Born organiser Kathy with her steady boyfriend, Mary with her unhappy family background and naive, slow-on-the-uptake Joanne are first seen in front of their mirrors – their priority is to be pretty and popular. They’re insufferably elitist too, in their final year in college, by which time their future paths are already diverging. Later, it becomes clear just how different their lives have become during a tense reunion when the sparks really fly. 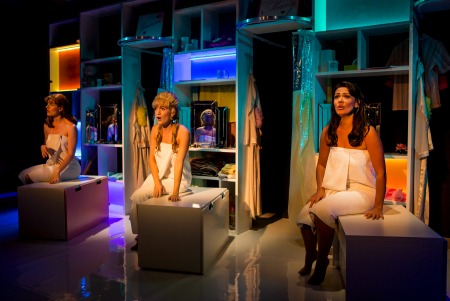 Lizzy Connolly is a daft delight as Joanne who thinks happiness automatically lies in being a wife and mother, Lauren Samuels’ cynical Mary hardens over the years as her career brings wealth and success, and Ashleigh Gray’s Kathy is forced to realise that real life refuses to stick to a pre-arranged programme.

It’s hardly ground-breaking stuff, but these three talented singers (despite being burdened with some truly frightful wigs!) ensure that this coming of age musical both amuses and entertains.