Theatre Reviews: Miss Atomic Bomb and If You Kiss Me, Kiss Me

Whilst nuclear testing was blasting away in the Nevada desert, parades of pretty girls helped lure in the tourists keen to witness these “harmless” explosions.

There are some interesting facts packed into this new musical, but its three writers have added too many two dimensional characters and barely developed plot strands which overload a promising scenario.

There’s an army deserter (Dean John-Wilson’s Joey) who falls for Utah sheep farmer Candy (Florence Andrews) who’s about to lose her trailer ‘cos she hasn’t any money and is heading off to LA with best friend Myrna who wants to be a fashion designer. Meanwhile Joey’s brother (abruptly promoted hotel manager Lou) is in desperate need of a gimmick to boost The Golden Goose’s revenue.

There’s some real talent – as well as a dead sheep – on show here. Simon Lipkin’s comic timing is spot on as Lou (who manages to get himself shot in the foot not once, but twice), and, despite an erratic accent, Catherine Tate’s OTT Myrna gets some laughs and can hold a tune, too. The songs, which range from country to a Les Mis spoof, aren’t bad either. But everyone is trying so very, very hard to make this work that the overall result is effortful rather than involving.

Meanwhile almost all colour has been bleached out of the set of IF YOU KISS ME, KISS ME, an hour long, self-proclaimed archaeological dig into the postpunk and new wave songs of the late 70’s and 80’s,  fronted by Ab Fab’s talented Jane Horrocks and occupying the territory somewhere between a gig and a dance piece. 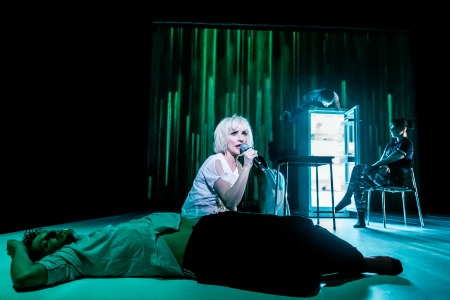 Okay, this isn’t really my music, but part way through, the words “vanity project” sprang to mind, a view later reinforced when I read an interview with Horrocks in which she confesses that the piece was initially conceived out of boredom. Working with Aletta Collins (who also directs and provides the choreography for a quartet of dancers) and backed by four musicians, she reinterprets the songs she first heard as an adolescent growing up in the north of England.

It’s all very stylishly done – a gigantic electric plug and socket dominate Bunny Christie’s austere, grunge-free, monochrome set with its idiosyncratically stocked fridge – and Horrocks (looking a lotlike Debbie Harry and belying her age whether in black micro skirt or boilersuit) is an assured performer.

But the enterprise will probably be most appreciated by those for whom the music of Joy Division, Buzzcocks, The Human League, Morrissey and The Smiths formed the backdrop to unhappy firstloves. The rest of us are unlikely to be converted.

IF YOU KISS ME, KISS ME