Theatre Reviews: The End of Longing and Hand to God

Still, Matthew “Chandler” Perry probably has enough fans of the long-running TV sitcom Friends to guarantee that there’ll be bums on seats for the limited run of THE END OF LONGING, his first venture into writing for the stage. It’s a gag-filled four-hander in which a drunk, a high class hooker, a neurotic pill popper and a dim but kindly hunk find sex – and somewhat unbelievable love – as they approach early middle-age.

Perry himself plays alcoholic photographer Jack, a raddled 40 year old who shamelessly admits to loving his booze more than anything else in the world. (Given his own personal history, he certainly knows what he’s talking about.) Prostitute Stephanie likes her work – not to mention the $2,500 an hour she gets paid for it- but finds herself attracted to this hopeless loser, whilst her best friend Stevie (biological clock ticking frantically) reluctantly finds contentment in the arms of Jack’s mate Joseph.

Bars and bedrooms form the backdrop to their respective romances and although a dishevelled Perry makes a convincing drunk, director Lindsay Posner has gone for a production in which the only real subtlety comes from Lloyd Owens’ performance as the accommodating Joseph. The laughs are there, but the overall impression is of a two-dimensional rom-com tinged with a darker edge and offering, against the odds, the possibility of a fresh start even when you think it’s too late to change.

Meanwhile, in a shameless attempt to emulate the well-deserved success of Avenue Q, HAND TO GOD, Robert Askins’ Broadway hit set in a Texas Church hall, puts the out-of-control antics of a demonic sock puppet centre stage. It’s surrounded by some top class English actors, but, for the most part, the result proves a rather messy exercise. 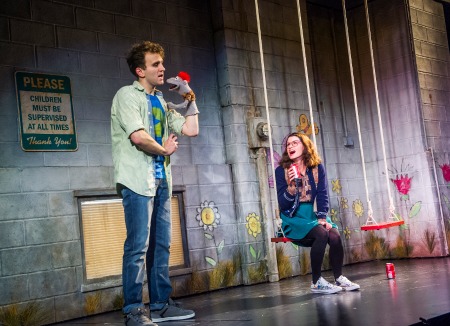 A virtuoso Harry Melling (Dudley Dursley in the Harry Potter films) literally acts his socks off as Jason, the troubled teenage son of Janie Dee’s widowed Margery. Whilst he channels his darker feelings through his puppet alter-ego, Tyrone (grey, gaping-mouthed and possessor of some powerfully sharp, ear-chomping teeth), she’s searching for comfort in religion and in giving puppetry classes to a handful of dysfunctional youngsters. Instead, she’s offered solace of a very different nature both by Neil Pearson’s ineffectual pastor (rejected) and by Kevin Mains’ randy adolescent bully Timothy (violently embraced). Unprepossessing Jessica (Jemima Rooper) completes the cast and, sock on hand, joins Jason/Tyrone in an extended inter-sock sex scene – an absolute hoot and (the performances themselves and a scattering of witty lines apart) by far the best thing in this peculiar attempt at satire.

THE END OF LONGING