They shouldn’t be alive: TNT looks at the worst accidents survived

“It’s a striking injury. It’s not everyday someone is brought in and speaking with three feet of a spear protruding [from their head],” Yasser Lopez’s doctor George Garcia said, in something of an understatement. Lopez, 16, had been mucking around with a speargun when it accidentally went off, shooting a metal spear into the front of his skull, an inch above his eye, through his brain, out the back of his head. He had been swimming at the time in Florida, touching the weapon’s trigger by mistake as he loaded the gun. Lopez lost consciousness and his friend passed out in shock, before coming to and raising the alarm.

Arriving at the University of Miami-Jackson Memorial Hospital, Lopez was fully awake. Doctors had to use rebar cutters and vise grips from the fire department to remove 18 inches from the shaft protruding from the teen’s head so they could X-ray him (pictured above). Surgeons then spent three hours taking out the harpoon from Lopez, who is now in a serious but stable condition.

“It’s a miracle the spear missed all the main blood vessels of the brain,” neurosurgeon Ross Bullock said. “The most important thing is to resist that temptation to pull that thing out. “The amazing thing is the boy is able to speak a little now. He is saying short sentences, he’s out of bed, he’s able to make his needs felt. His words are easy to understand.”Amazingly enough, Lopez is expect to make a full recovery after staying in hospital for the next few months.

“Where he is right now is really a modern miracle,” Dr Anders Cohen, chief of neurosurgery and spine surgery at the Brooklyn Hospital Center, said. “He had a lot of good factors … a perfect storm – he got very lucky.” It’s the latest in a long line of gruesome, life-threatening incidents where the victim manages to cheat death by, in many cases, just inches. Here, TNT looks at some of the most shocking incidents from which people have walked away.

Tourists cheered as Erin Langworthy, then 22, jumped head-first from the Victoria Falls Bridge into the Zambezi River on the border of Zimbabwe and Zambia this year. However, her adrenaline turned to fear as the cord snapped in two, plunging the Australian 111 metres nose-first into the crocodile-infested water. She was forced to swim, the rope around her feet, as the cord had got stuck in debris. Langworthy broke her collarbone and suffered bruising. “I think it’s definitely a miracle that I survived,” she said.

Supratim Dutta defied the odds and survived after he was impaled by a five-foot-long, two-inch thick, iron bar. The rod shot through the upper half of his body and pierced out of his back when the then 23-year-old was involved in a car crash in India in 2008. He underwent six hours of surgery at the Jai Prakash Narayan Apex Trauma Centre. Professor Biplab Mishra said: “He was in excruciating pain with blood oozing out from both the entry and exit wounds.” Dutta survived to tell the tale – the rod had missed his vital organs.

Michael Holmes was spinning out of control as he plummeted towards the ground after skydiving 12,000ft. The then 25-year-old skydiving champion, from Jersey, had leapt from a plane above Lake Taupo, New Zealand, only to have both his parachutes fail. He recorded a farewell message on his camera before crashing into a tangle of bushes and branches at 80mph. His skydive buddy found him bleeding and unconscious with a shattered ankle and punctured lung, but alive. “I should be dead, absolutely,” Holmes said in 2007. 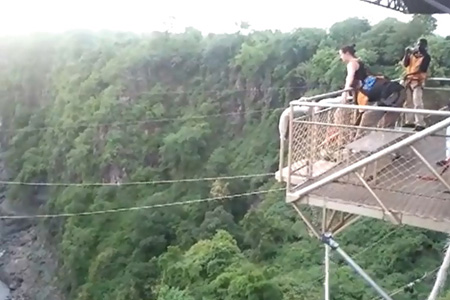 Yi Zhao, Having a bath

When Yi Zhao arrived at hospital with a tap and 16 inches of pipework stuck in his eye, he was expecting doctors to help. However, the patient, who had slipped in the bath, impaling his left eye on the tap at home, was forced to pull it out himself. Firefighters had rushed Zhao, then 57, to casualty, only for surgeons to take three hours to send for a plumber to remove it. “I felt I could stand the pain, and it wouldn’t be a problem. It didn’t look too complicated,” said Zhao, of Chongqing, central China, in 2009. He made his decision after studying the X-ray with his good eye.

‘Ahmad’, Being a hero

An X-ray of 15-year-old ‘Ahmad’ reveals how he cheated death after being stabbed in the head while trying to stop his friend’s phone being stolen. The attacker lodged a five-inch blade into the front of the victim’s skull during the incident. The attack on the victim, known only as ‘Ahmad’, removed five per cent of his total brain matter. Surgeons said if anyone had tried to remove the knife, the boy would have died. A 17-year-old was jailed over the incident, which happened outside a supermarket in Walworth, south London, in 2008.

One-year-old Nicholas Holderman was left with keys embedded in his eye and brain after falling on to them while toddling around at home. Hearing him cry, the boy’s parents saw the metal had punctured his eyelid, but didn’t dare to pull it out, calling paramedics to their house in Kentucky, America, instead. The first responders were pretty horrified. “Not something I ever want to see again,” Boyle County firefighter Chris Coffman, who was first on the scene, said. However, Holderman had to be flown to hospital, where it took an experienced surgeon 30 minutes to remove the key. The baby experienced no brain damage or sight loss. “It was pretty horrifying,” Coffman added.

‘life is good’: surviving being cut in two

It might seem impossible, but the human body can survive being cut in half. Two cases prove this theory. Peng Shulin and Truman Duncan both lived after being sliced across their waists. Shulin was cut in two by a lorry in 1995. It took a team of 20 doctors to save his life, sealing his torso, leaving him 2ft 6in tall. He amazed medical professionals at the China Rehabilitation Research Center in Beijing, walking again with the use of specially made bionic legs.

Truman Duncan was swept underneath a train and cut in two in 2006. Despite losing both legs and a kidney, the then 34-year-old called for an ambulance on his mobile phone – telling them, “I think I’m cut in two” – survived a 45-minute wait, and then persevered through 23 surgeries. Two years later he was mobile, using a wheelchair. “Life is good,” he said.