Ticket to ride: How to best navigate your bike through the streets of Sydney

There’s riding your bike, and then there’s riding your bike through city traffic. Entirely different experiences depending on how comfortable and confident you feel, and your overall understanding of cycling.Riding your bike should be an enjoyable experience, not one that’s ridden with anxiety as lines of cars build up behind you. With practice and good advice, there’s no need to panic as a bus pulls out beside you.

Drivers have a history of intolerance towards cyclists, but as more people ride, driver attitudes have improved. The City of Sydney wants to reach its target of 10 per cent of all city trips on bikes by 2016 as well as introduce a bike share program by 2017.

In addition, the City is building up its biking infrastructure with its plans to develop a bike network that will include 55 kilometers of separated cycleways – dedicated bike-only road lanes separated by a kerb from vehicles and pedestrians.

With the push for more cycling opportunities, The City of Sydney also funds city bike programs to help cyclists of all ages and levels about what it means to be a comfortable, confident and gracious cyclist in the city.

“Our counts of bike trips in the City of Sydney show that trips have more than doubled (113 per cent increase) in only three years! As we build more of our network, connecting it up, even more people will start riding and more drivers become used to encountering people riding to work or shops,” said Fiona Campbell, the City of Sydney Cycling manager.

One of the City’s cycling programs is called Bikewise. The program offers a range of free classes on weekends for all levels of cyclists, from its Rusty Riders courses for first time (or “rusty”) cyclists, to its city bike courses.

Bikewise can also arrange bicycles and helmets for its class participants. The classes are held on Saturdays and Sundays and are structured to give cyclists the skills and confidence in their abilities, as well as learn the ins and outs of cycling. 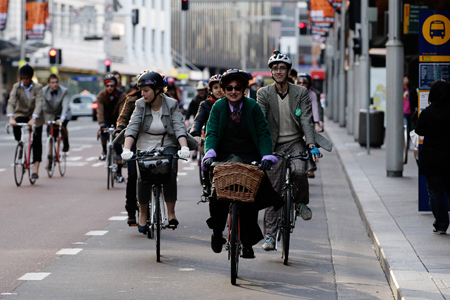 “If I’m riding down the street, and I see a woman applying some last minute lippy [in a parked car], I slow down because it means the car door is about to open,” said Laura Eadie an instructor at BikeWise Sydney who has been cycling as a commuter for nearly five years.

“Dooring”, accidents involving cyclists and car doors, is the number one reason adult cyclists in Sydney’s CBD end up in the hospital.

According to Campbell, even though the doubling of cycling trips in the last three years – many by people new to riding – the number of crashes involving bicycle riders has stayed steady for the past six years in the City of Sydney; however, motor vehicle occupant crash injuries have been increasing in that period. There have been no bicycle rider fatalities in the City of Sydney since at least 2005.

Yet it’s not the only thing riders need to be conscious of. Cyclists should ride to the rhythm of a few golden words: visible, communicative, predictable, gracious, respectful and confident.

Riding through city traffic means you’ve got to be a little dog with big dog syndrome.

“A bike is a vehicle, just like a car is and a motorbike and even a mac truck,” the BikeWise instructors state very matter-of-factly.
But at the end of the day, it’s easier said than done for some cyclists to just get on their bikes and hit the city streets without any fear or hesitations.

“Cycling is all about planning out your route,” says Patrick Jones, the co-creator of the city’s BikeWise program. 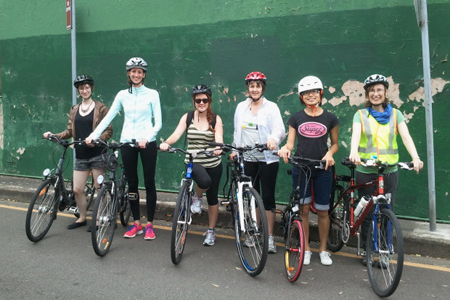 Tricks of the trade

Cyclists need to take a route they feel comfortable with, even if it means adding extra time on to their journey or commute. Some streets have shared footpaths or bike lanes like Sydney’s ever-popular Bourke Street.

When there aren’t any bike lanes available, cyclists shouldn’t hesitate to ride in the center of a traffic lane as they would if they were driving their cars.

“That was probably one of my scariest moments cycling here around Sydney was when I found myself stuck in fast moving traffic along George Street with nowhere to pull over,” one cycling student chimes in.

But a nerve-racking bike experience is something that BikeWise aims to help you avoid.

“Your route can be all along backstreets if you want – you don’t need to drive in the traffic to be a ‘real’ cyclist. The backstreets can show you the most beautiful side of Sydney,” says Jones.

For those who don’t yet have a bike, bikes can be rented from a number of places, such as Centennial Park and Livelo Bike Hire.

Cycling can be contagious, because it can make everything about the city feel so fresh and crisp and quietly chaotic. It gives locals and newbies alike the chance to peel off a whole new layer to a city you thought you knew so well.

And that’s where totally new opportunities to explore arrive. 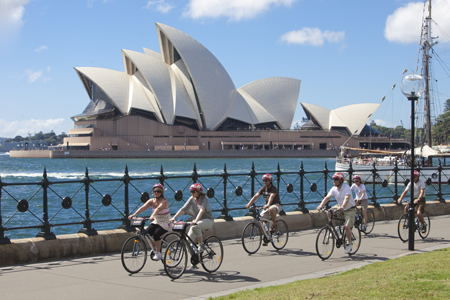 Where to cycle around Sydney

Sydney’s Market Street, College Street and Bourke Street all have separated cycleways for riders who wish to be in the hustle and bustle of it all. If you really want to ride through the heart of Sydney then challenge yourself for the ride from the Harbour Bridge to the Anzac Bridge.

But for the heart of its parklands, pedal your way over to Moore Park and Centennial Park are ridden with cycleways and shared pathways that make riding a breeze for any level cyclist.

For what feels like never-ending freedom, the 35kms of rides and pathways through Olympic Park are calling your name.

Looking for a scenic ride to explore the areas around Sydney? Riders can head out on the 15km track from Thirroul to Wollongong, which has a train station at both ends of the trail, spectacular scenery and flat land that will have your quads and calves thanking you later.

If it’s a workout you want, then a work out you’ll get if you head out to the Ku-ring-gai National Park. Set aside the day for 15km of hills as you cycle over to Akuna Bay or West Head for some smashing views of Palms Beach and Lion Island.