Congratulations on Tales from New Orleans. The forthcoming production is very timely given the 10 year anniversary of Hurricane Katrina. Is this why you decided to bring the show to London now?
I am coming to London because I LOVE London and was invited! Honestly, any reason to visit this magical city will get me here in a heart beat! Perhaps the organisers are linking it all in to the 10th anniversary…?

Tell us a little about Tales from New Orleans…
The show was born out of necessity right after the storm… right when people were starting to come back, there was NO entertainment, the actors and musicians were not able to make it back as quickly as others, so my friend who owned an wonderful cabaret asked me to put together a one-man show as a benefit for the displaced actors and musicians. I did and the show sold out again and again and, over the years morphed into BATT ON A HOT TIN ROOF. It’s a collection of fun stories and songs from my roller coaster of a life in New Orleans and New York. Trust me: you will laugh!

What are some of the songs we’ll hear?
The fare is a “mixed bag of nuts”. I believe life is a wonderful eclectic mix – sort of like a gumbo [a dish that is often cited as an example of the melting-pot nature of Louisiana cooking] and that is what the song list is. Expect everything from pop to Broadway, Billy Joel and Cole Porter…I love it when people leave the show having enjoyed a new interpretation of a classic, as well as hearing great new tune for the first time!

You’re a New Orleans native Bryan but, as an actor, spent a lot of time living and working in New York and LA. What do you miss most about New Orleans, when you’re away?
I suppose I missed family and friends the most, but also the fabulous food and the easier approach to life. I didn’t realise how much I missed NOLA [a nickname for New Orleans] until I moved back. Whenever I travel now, or work in New York or LA, I really long for home. While working on and off Broadway for nearly 20 years, I was so entrenched in that life and that world that I couldn’t imagine anything elsewhere. However with the opening of my retail home furnishings shop, HAZELNUT, in Nola  and my filming Mad Men in LA, I was slowly weaned off the bigger cities and that frantic pace, and realised that I wanted a slightly calmer, more grounded life. It wasn’t pre-planned but rather an organic destination.

You’ve a veteran of both TV and stage. Which is your favourite medium and why?
I love them both but, while the process is the same, they are very, very different. In theatre you have the luxury of a lengthy rehearsal period, previews etc. Then your job is to maintain the performance and make it look like it’s the first time you are doing it. With film and TV, there is virtually no rehearsal period and you must be prepared to try everything right off the bat. Sure, unlike stage you get additional takes, but once the scene is filmed and the cameras move on, that’s it: it’s in the editor’s hands. On stage it’s one shot and you are in the driver’s seat. Film and TV maybe more lucrative and reach the masses, but there is and never will be anything like a live performance!

Internationally you’re perhaps best known for your role as Sal Romano, Sterling Cooper’s art director, in the hit AMC series Mad Men. Do you have a favourite Mad Men memory?
So many! I loved filming the ‘Bye Bye Birdie’ scene. Believe it or not it was the hardest to memorise and stage, being both heartbreaking and funny at the same time. I loved all the hoopla that came with being on a hit series – the red carpet events, award shows, photo shoots… for me, it was the  icing on the cake. We had no idea when we filmed the pilot, that the show would be such a phenomenon… joyous! 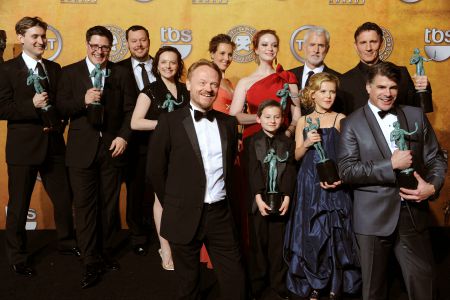 When did you first know you wanted to be a performer?
I was always entertaining my family and friends. I look back now and see that it was a vehicle to overcome my shyness. I think it was during the third grade play though when,  as ‘Rudolf  the Red-Nosed Reindeer‘  I got applause mid-song that I knew. I remember thinking to myself:  I like this!

Do you ever read your reviews?
I try not to, but friends cannot help but congratulate you when reviews are good. When friends are silent – that’s when you worry.

Any advice for budding actors?
Study, experience life, say yes, ask questions later and…show up. You never know who you will meet – one door leads to the next. Also be prepared and don’t ever be late. Lastly don’t talk trash about other people’s shows or performances – you never know who might be listening and it makes you look bad.

What’s next for Bryan Batt?
Several films are in the can waiting for release and I start work on a new film, LBJ – directed by Rob Reiner – in early October. Then I am workshopping a play in New York later in the month. I’ve also adapted my first book for TV so I’m trying to get that pilot made, although achieving world peace seems easier at the moment.

Any message for your UK fans?
Come see the show. I promise a good time will be had by all!

Batt’s one-man cabaret show about his hometown New Orleans runs from September 21 to 23 as part of Bayou Banquet, a showcase of the city’s culture, which comes 10 years after Hurricane Katrina.Creole food and jazz feature at the season in Waterloo Vaults from September 16 to 27. For further information and to purchase tickets, click here

Me and My Mum

How Artificial Intelligence Has Changed the Online Casino Industry