Hi Alex. Obviously we know you from Made in Chelsea but today we wanted to talk to you about music. We hear you have a new single out – could you tell us a bit about that?
So the new track is a different vibe to the stuff I’ve done before, You’d probably class it as Electronica, its a fair bit slower at 100bpm and weirdly sounds like something you could imagine being played on MIC while someone is wistfully looking over the Thames after a breakup. Perhaps that’s a product of me being on the show for over three years now, haha. It’s not something I necessarily play in my regular DJ sets as its not a full bodied dance track but, if I do, it’s a sort of end of set track. People have been saying it’s in line with a kind of MGMT vibe.

How did you get into DJing and producing Alex?
It sort of happened by osmosis really. One of my best mates Josh Parkinson, who I lived with for a few years ,was Djing and producing so I started jumping on at sets etc and it kind of went from there. I managed to find myself a few regular slots every month and then eventually thought I’d give production a go. Another one of my good mates, James Levey, who is now smashing it in the trio Felon said we should have a go making a track together and we did a remix of Corona’s Rhythm of the Night and I’ve carried on using the same studio ever since.

When did you first know you wanted to be a DJ/producer?
I’ve flirted with the idea since I was a kid but I guess I was, if nothing else, a bit shy. I think also I was kinda channelled down the professional 9-5 route which definitely did not view Djing as a means of a earning a living. However when I left university, I thought I’d just go for it! And since doing the show [MIC]  I’ve had more time to focus on the music and get in the studio and play gigs etc.

Speaking of which, do you read reviews of your gigs?
Yeah I do. It’s always good to see what the reaction is whether bad or good. Constructive criticism and all that! I do attract trolls a wee bit on social media –  from being on the show I guess.  Sometimes I quite enjoy giving the trolls a lil troll back! Haha.

Who are your own personal favourite artists?
The list is rather long and a mixture of some newly discovered and older known artists: Dusky, Bondax, Icarus, Edx, Hot Creations, Hot since 82, Subfocus, DJ SKT, Plastik Funk & My Digital Enemy, Scuba, Jamie Jones, Dubrocca, Christoph, Claptone, Drumsound and Bassline Smith, SHY FX, DJ Fresh, Michael Andre and SMB would all feature. My taste in music varied so much while growing up spanning from death metal, punk and scar to jump up, jungle, house and reggae. I think my first real taste and passion for dance music came through Drum and Bass (specifically jump up) though and I still love to fit this into my sets for high energy. 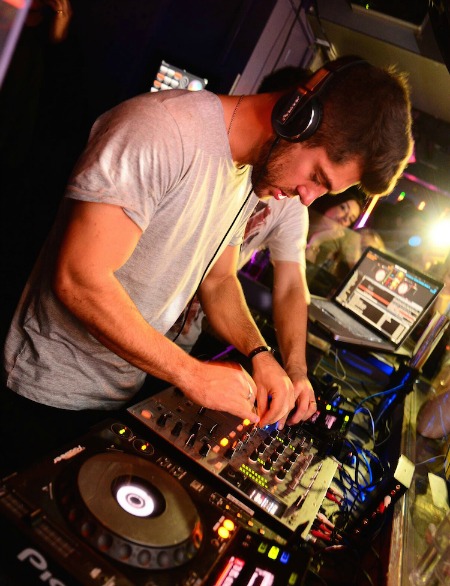 What was the last album you bought?
I haven’t bought an album in blimmin’ ages as I generally just buy single tracks for playing out but I guess the last album I bought was actually Daft Punk’s Random Access Memories, which I thought was pretty damn enjoyable. I have always been a big fan and this album didn’t disappoint at all!!

Any advice for budding DJs/producers?
Ermm don’t be shy like I was, get yourself out there as much as you can! SOCIAL MEDIA IS KEY, bang out as many mixes as you can and keep doing that until people notice I guess. Try and find yourself a regular slot so you can practise actually playing to a crowd as that is one of the biggest steps really – being able to hold it together in front of a big crowd and keep them happy!

Do you think it’s been easier to transition into music because of the success you’ve enjoyed with Made in Chelsea?
It’s been swings and roundabouts really. Like I’d say I’d probably have struggled to get where I am without MIC, it undoubtedly gives you a massive boost and gives you a sizeable reach which is ideal for pushing music out. I think people who down play it are telling porkies really, ha! Whatever you think of the show, it’s definitely a great platform for whatever you wanna do. On the flip side you will always be tainted with that brush and it can be a struggle to be taken seriously….My favourite line is “oh right you can actually DJ” which is a sort of double edged comment, one which I guess you gotta take as a compliment.  I mean it’s not people’s fault they have preconceptions [of reality TV stars.] If I wasn’t on the show, I would probably have the same preconceptions myself if I’m honest.

Well Made in Chelsea is our gilt-y TV pleasure. Which of your co-stars, do you hang out with off set?
I spend a lot of time with a fair few of the cast. Jamie and I are fairly inseparable at times (he’s very needy ha) and I obviously spend a lot of time with my girlfriend Nicola as well as Spencer, James Dunmore, JP, Binky, Sam, Jess, Toff and Steph. Jamie and I are about to go into business together which is fairly exciting, so we will soon be spending even more time together.

Have your co-stars been supportive of your music?
They’ve been bloody decent actually, posting on social media and helping spread the word. I’m super appreciative as it can give a real boost to my tracks when pushing them out. It’s also good to know that they enjoy my music too!

Alex Mytton celebrates the release of his new single ‘Letters’ with a DJ set on 29 January at McQueen, Shoreditch. Tickets from www.designmynight.com. Follow Alex www.instagram.com/alexmytton.

Queensland’s ‘party houses’ could be under threat

Video: Kai the hatchet-wielding hitchhiker saves woman from man claiming to be Jesus