TNT vs Food: Where to go for the biggest, hottest and most extreme meals in London

Taste of London kicks off on June 20, an al fresco festival of food serving up samples from the city’s very hottest restaurants. This gourmet wonderland is doubtless worth chewing over for the committed foodie, but if you really want to take a bite out of the Big Smoke, we’ve found a whole other take on London’s food scene for you to get your gnashers round.

Seems Travel Channel’s Man V Food has a lot to answer for, as these days the capital is packed with monstrous food challenges to test the machismo, determination and gag reflex of its hardiest citizens. Of course we felt it only fair that TNT test run a few of these for you. What follows is not for the faint-hearted. 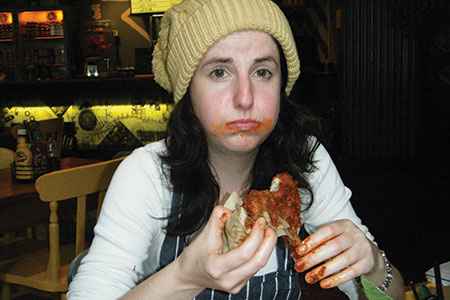 Brand-new American BBQ-style hangout Lazy Bones in Farringdon has just launched a hot wings challenge, daring diners to eat 12 of its house special spicy chicken wings and down a chilli mojito in just 15 minutes. Manage it and you don’t have to pay for the meal. Sounds simple enough, but these wings are sourced from a farm just outside of London that must be breeding mutants – the wings are absolutely enormous. Still, it’s possible – I’m informed one punter smashed the challenge in six minutes.

Beginning with a ‘slow and steady wins the race’ approach, I’m pleasantly surprised to find that the sauce – made on site using long red Dutch chillies, chipotle chillies and Thai Sriracha eagle brand chilli sauce – isn’t as searing as I’d expected. Buoyed, I start tearing into them faster, the fiery red coating smearing up the sides of my face. Seven minutes in and the slow-build effect of the heat makes itself known as my nose starts running.

Twelve minutes in and the sheer volume of poultry I’ve ingested starts to make me feel a bit dizzy. When time’s up I’ve still three and a half to go and I haven’t even touched the mojito. So it’s a fail, but a respectable one. (As respectable as you can look with chilli sauce all over your mug, anyways.) 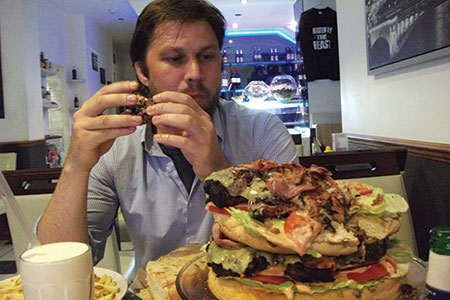 Croydon eatery Burgers at Black’s serves The Beast, the biggest burger in Europe. It hasn’t been beaten – and it’s no wonder. Try to digest these numbers: 16 pounds total weight, seven of them taken up by two Prime Black Angus beef patties, plus half a pound of melted cheese, streaky bacon covering both layers, a whole iceberg lettuce, seven tomatoes and three layers of bun. In all, it’s 18,000 calories, the recommended daily intake for an average man … for a week.

Nevertheless, I’m going great guns at the 10-minute mark, but after 15 minutes my brain catches up and says: ”Oi, dickhead, stop eating.” I barely get through a third of it, but you can also take it on as a team.

Four blokes once smashed it in 14 minutes, meaning they didn’t have to pay the hefty £90 pricetag for failure.Want to get amongst it? Turn over for more of London’s biggest and hottest meals. Good luck!

Click through for more extreme eating places in London > 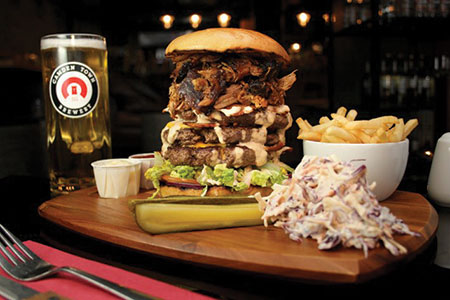 There might not be a prize for conquering this monster, but polish it off and you can pretty much guarantee (a) the stunned respect of your contemporaries and (b) an instant and possibly devastating (hence the name?) cholesterol problem. Contains three 6oz patties, 200g of pulled pork, six rashers of bacon, six slices of cheese, lettuce, onions and pickles. Bon appetite!

The Hurlingham pub boasts that, using the highest pain rating chilli sauces from the PsychoJuice range at Dr Burnorium’s Hot Sauce Emporium, it has “created chicken wings that leave you speechless”. Finish them in 15 minutes and you win a T-shirt and a place in the Hall Of Pain. 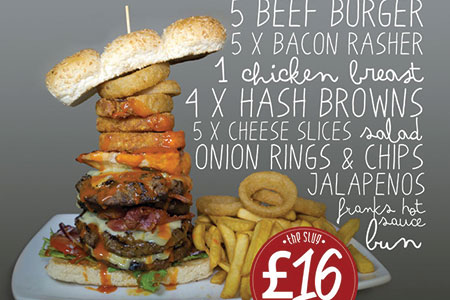 Newly reopened Antipodean mecca The Slug at Fulham has just launched its ‘Beat the Meat’ challenge, with the failed attempts so far named and shamed on Facebook. Could you be the first to prevail?

This towering feast is stacked with five beef burgers, five bacon rashers, one chicken breast, four hash browns, five cheese slices, salad, onion rings, chips, jalapenos and hot sauce. Eat the lot in an hour and it’s yours for free – but you can’t leave the table in that 60 minutes and your plate must be absolutely clean at the end of it. Fail and stump up both £16 and your dignity.

All You Can Eat Hot Dogs – Camden

To celebrate US Independence Day on July 4, The Blues Kitchen is hosting a hot dog eating competition. You’ve got half an hour to stuff down as many as you can. Email info@theblueskitchen.com if you want to take part.

Prime cuts of meat sliced onto your plate straight from the skewer, Brazilian-style. Turn over a card when you’re full.

Every Monday at Big Easy on King’s Road there’s all-you-can-eat BBQ and bottomless beer for under £15. No prizes but still pretty sweet, no? 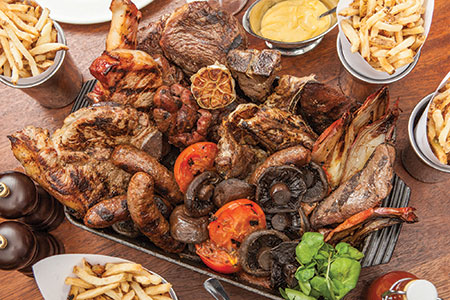 Hawksmoor is best known for its impeccable steaks, but any meat served up at this London institution is sure to be sublime. Reckon you’re a committed carnivore?

Put your money where the meat is with the Guildhall branch’s serious-as-the-heart-attack-it-might-induce mixed grill (above), which the menu warns is “not for the faint-hearted” and requires 48 hours notice to cook up. Meant to share between three or four folks, it boasts beef, bacon, veal and mutton chops, veal liver and kidneys, Hawksmoor sausages, bone marrow, tomatoes, mushrooms and onions, Gentleman’s relish and beef dripping fries. Erm, holy shit!

Set in a converted fire station, warehouse-style The Yard offers all 14 of its pizzas (normally served at a quarter of a yard) in yard-long form – that’s a monstrous 36 inches. They reckon it’s perfect for sharing – the wusses!

Red Dog Saloon’s hot sauce is made with Naga Viper chillis – 250 times hotter than a jalapeno. Eat six wings in 10 minutes and win a T-shirt. You must sign a waiver before you take part and handle them with gloves. Good luck with that! 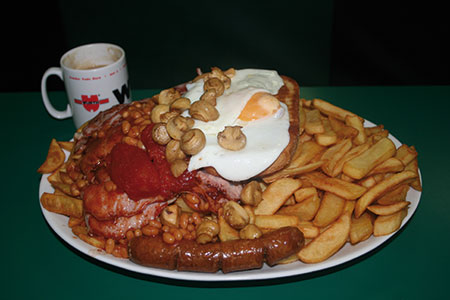 Evidently, there are some machismo issues in Croydon – not only does the borough offer up TNT-beater The Beast , it also serves a chest-puffing opportunity at breakfast.

The aptly named Fat Boys Cafe is the brains behind The Blowout, which piles six rashers of bacon, two sausages, two eggs, a fried bread slice, beans, tomatoes and mushrooms on a mountain of chips. Might sound relatively easy, but we hear it’s the fries that get ya. Finish it in an hour and it’s free. Fail and live with evidence of your lameness forever.

Pub The Pride of Paddington’s burger isn’t the biggest on the list – though it’s not exactly diminutive with three patties, three bacon rashers, triple chips and onion rings – but the real challenge lies in the timing. Wolf it down in 20 minutes and you don’t have to pay a penny – though we assume you have to keep it down, too. 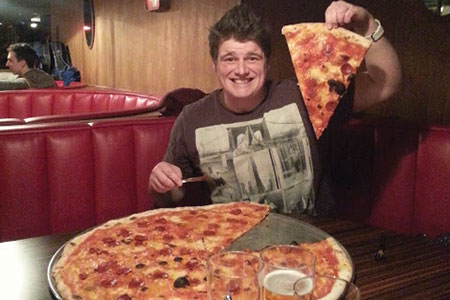 Ray’s Pizza serves three formidable sizes – 12-inch, 18-inch and the preposterous 26-inch. There are eight toppings to choose from and plenty of extras, but be warned, Ray’s describes ordering the 26-inch as a “serious commitment”. Collection only, so bear transporting this elephantine effort in mind, too.

Swanky-ass JW Steakhouse serves up this colossal Aberdeen Angus rib-eye – weighing in at just over 900g – on the bone. It’s a bona fide beast.

This American-style diner serves two mega-burgers, The Empire State and The Towering Inferno, each stacked with four burgers and varying toppings.

Amici serves up a gargantuan calzone weighing 2kg, topped with goat’s cheese, sundried tomatoes, ham and olives. Finish it and get dessert and coffee free. Bleurgh. 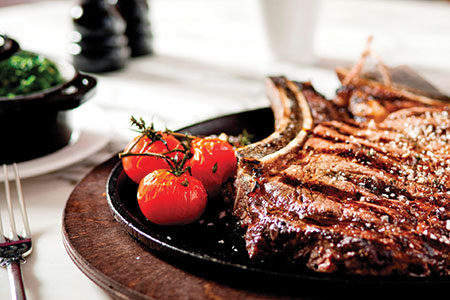 Gillray’s Steakhouse and Bar offers nine cuts of 35-day dry aged English cattle, starting at a modest 300g and cranking it up to the positively Herculean 1kg ‘Bull’s Head’. This butterfly cut, double rib steak served bone-in costs a pretty penny, but surely the bragging rights that come with vanquishing this fiend are priceless? Either way, we’d definitely recommend bringing a cloth to mop up the meat sweats.

Enough to make Adam Richman himself dry retch (we imagine), The Thirsty Bear pub challenges you to eat three Grizzly Bear burgers – each contains 680g of sirloin and fillet with slow cooked BBQ pulled pork, mozzarella, mixed leaves, tomato and red onion – plus two portions of chips, a side salad and drink two pints of ale, all within an hour. Do it alone and get it free.

Oriental Aftershaves That Will Spice Up Your Style This Autumn