Covering an area that’s the same size as Belgium and housing some of the great cultural and natural wonders of the world, Kakadu is certainly worth the hype.

Located about three hours southeast of Darwin, it is a place you should explore by car, preferably 4WD, with some of the most popular sights lying at a fair distance from each other. The stand out attractions are the site of Ubirr, where the rock-art is estimated to be up to 8,000 years old, Nourlangie rock located in an outlying formation of the Arnhem Land Escarpment, and a cruise along the Yellow Water wetlands– one of those rare places where reality matches expectation.

We’d recommend a trip to the remote and spectacular Twin Falls that descends from an elevation of 158 metres above sea level via a series of tiers that range in height between 44–51 metres and the nearly 220 metres high Jim Jim Falls, which can be reached along a 4WD track that turns south off the Kakadu Highway between the Nourlangie and Cooinda turn-offs.

Maguk Gorge (formerly Barramundi Gorge) is also well worth a visit – a lovely spot for relaxing and swimming – as is Gubara. This pretty six kilometre trail ends at a rainforest cloaked chain of rock pools. Be prepared to spend several days in Kakadu. The UNESCO-listed park is larger than Yellowstone, Yosemite and the Everglades combined, so it will take a while to explore. There are lots of accommodation options available within the national park. We are fans of the park-run camping areas. The park-run campsites have no booking system, so places are allocated on a first-come, first served basis. For camping outside of designated camping areas you will need a camping permit. If you prefer a bit more comfort choose from resort style hotels, self-contained cabins or budget rooms. Best to do some research before you go.

Boasting thundering waterfalls(at their most spectacular during thewet season), ancient rock art and theworld’s biggest crocs (the Corroboree Billabong has the largest concentration of saltwater crocs in the world), this is one of Australia’s must-see destinations and has something to offer every traveller on any budget. The dry season runs from June toSeptember and is the most popular time of the year for visitors. Prices can be dramatically lower during the wet season, yes it rains in Australia too, so it might be worth just bringing an umbrella.

Situated about an hour-and-a-half down the road from Darwin on the Stuart Highway, it is the perfect place to cool off, (swim between May and October) boasting several magnificent rock and plunge pools, cascading waterfalls and tropical walks. A splash under Florence Falls is pure heaven.The park is packed with animals and birds and the spangled drongo is one to look out for. 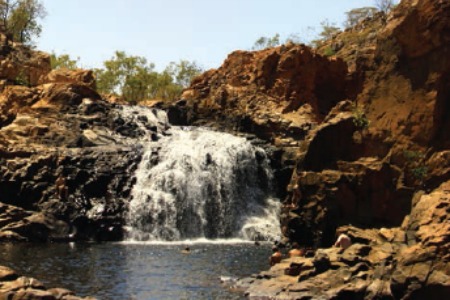 The nearly 3,000sq km park is owned by the Jawoyn Aboriginal people, who hold great ceremonial significance to the landscape. There are numerous walking trails ranging from strolls along the riverbanks to overnight walks and a five-day walk from Katherine Gorge to Edith Falls. The 58km Jatbula Trail passes waterfalls, monsoon rainforest, stone country and Aboriginal rock art, and ends at Leliyn, a tranquil camping ground.

One of the Northern Territories’ biggest attractions, and a visit to the area is not complete without coming here. The gorge, known by the aboriginal name Nitmiluk, is the central attraction of the park and is made up of 13 separate gorges linkedby a maze of sandstone-framed waterways. Visitors cruise in flatbottomed boats, canoe, and swim or walk to explore the magnificent gorges. 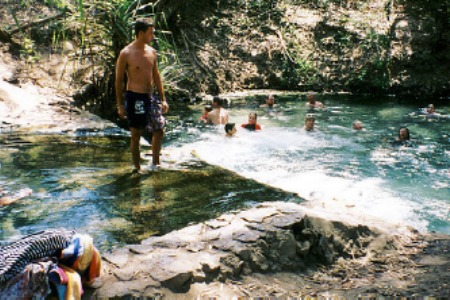 The naturally beautiful thermal springs comprise of a series of clear pools framed by native vegetation, and water temperatures average 32 degrees. Once, the main pool was simply an indentation at the edge of the Katherine River, but now the area is a place to relax, enjoy swimming in the pools, the picnic grounds and scenic walking tracks, which are crystal clear pools of water winding through the shade of trees to the river.

If you’re into horse riding, fishing and country-style hospitality, Mount Bundy Station is the perfect detour, three kilometres off the highway after Adelaide River.Mount Bundy is a working cattle station, but its overnight options are far removed from your average cowshed. The original station buildings have become spotless guest accommodation, plus there are luxury safari tents if you want to sleep under the stars. There are 4WD tours and plenty of animals on the property − guided horse rides cost $60 for two hours, with overnight treks by arrangement. 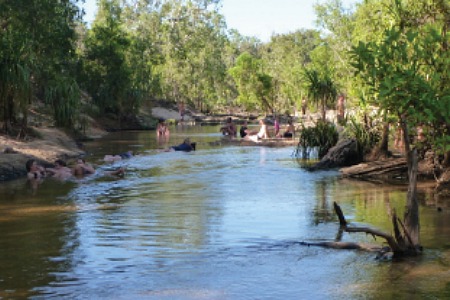 The hot springs is one of the most popular attractions.The water is too hot where it first reaches the surface and can only be safely entered once it has mixed with cooler water from a tributary creek. The springs are 130km from Katherine and 200km from Darwin. If you are travelling south, take the Old Stuart Highway scenic route from Adelaide River. If travelling north take the route just north of Hayes Creek. The last seven kilometres into Tjuwaliyn is a gravel road providing dry season access (May to September) for all vehicles and camping.

Bathurst and Melville Islands, known as the Tiwi Islands, lie just off the coast of Darwin. Being cut off from the mainland has made their culture unique – they don’t have didgeridoos or boomerangs, for example. Entry to the Tiwi Islandsis by permit only and most visitors come over on one-day tours of Bathurst, the smaller island. 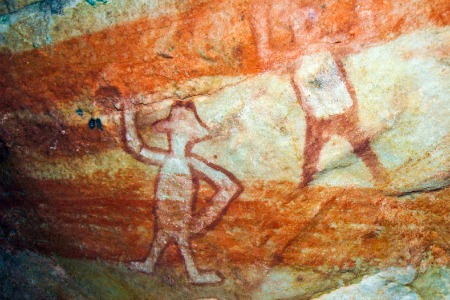 An area of more than 94,000 square kilometres, it is Aboriginal-owned and home to many different clan groups (it is a cultural stronghold from which the didgeridoo originates). Its rugged ranges arefringed by idyllic billabongs, flood plains, paper bark swamps and monsoonal rainforests; an amazingly beautiful wilderness.

Darwin is great because it’s a real mixture between far-flung outpost and holiday resort, it being the centre of the NT’s tropical Top End. It’s known as a laid-back blend of frontier outpost and modern city. At its heart is the Smith Street pedestrian mall, notable for shops selling Aboriginal art. Parts of the waterfront are lively and great for a night out.

The Easter Film Hop: Carpark screening of Grease, Dirty Dancing and Purple Rain at The Book Club in Shoreditch