Fancy tarting up in tartan trousers to see in 2013? Carrying flaming barrels of tar around an old village?

Or throwing some shapes in stilettos as you watch fireworks burst over Cardiff Castle?

Don’t spend New Year’s Eve stuck in a queue for the bar at your local pub this year, instead get together a group of your nearest and dearest and head off around the UK for one of these wild and wacky parties.

Party: Hogmanay is the mother of all NYE parties. The reason? It’s not the spectacular midnight fireworks, the heart-stopping view of the illuminated Edinburgh Castle or the DJs, dancers and bands on stage (Glasgow legends Simple Minds headline this year).

Nope, it’s that at the end of the day, December 31 is all about getting absolutely obliterated, and the Scottish can drink everyone under the table.

Join 80,000 booze-thirsty tourists and Scots on Princes Street for the party of a lifetime.

Drink: Start your evening off with a few wee drams of whisky. And then a few more. And repeat.

Wear: The barmier the better. Mad tartan outfits (make sure all your mates match, too) are de rigueur. 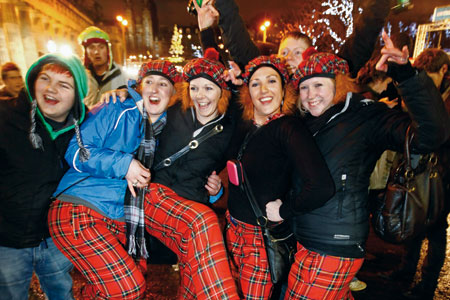 Party: Dublin is a party force to be reckoned with on New Year’s Eve.

A torchlit procession brings everyone out on the streets for entertainment and there’s live music galore with a huge Countdown Concert at College Green.

This features a 3D light display which illuminates Trinity College and top headline acts, which are being kept under wraps for now.

Drink: Guinness, of course. And a few rounds of Baby Guinness shooters. Why not?

Wear: A warm coat over your party threads – Dublin’s going to be a chilly place to spend the night outdoors.

Party: It all kicks off in Newquay town centre on December 31, where you’ll see hordes of Oompa-Loompas, Smurfs, saucy nurses, superheroes and Mad Man all on the lash.

Fancy dress costumes are a must, and everyone gets extremely competitive over the wackiness of their outfits, so make an effort.

There’s even a fancy dress carnival. Head to the Central Square to join the fun, then stop by one of the many pubs and clubs which will be ringing in 2013 in style.

Drink: It has to be Cornish cider, neat or mulled.

Wear: The most obscenely small, tight, stupid or just plain offensive costume you can think of. And, yes, it’s still too soon to do Jimmy Savile. 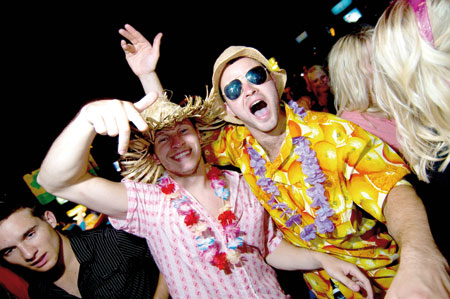 The famous Tar Bar’ls ceremony in the village of Allendale involves a procession of local men, called guysers, carrying barrels of flaming tar around the streets at midnight, before throwing them on to a bonfire.

It’s so dramatic you’ll feel like you’re in a scene from Game Of Thrones.

Drink: Real ale – this is a rather macho occasion after all.

Wear: Something that isn’t flammable. 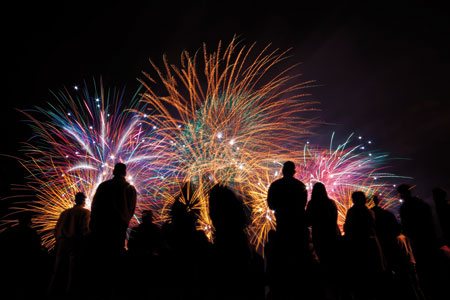 Party: You’ve got two options when celebrating Calennig in the Welsh capital.

The first is a nice gentle skate at midnight on the Admiral Open Air Ice Rink.

Alternatively, you can hit the city’s mega-clubs along St Mary’s Street for what will inevitably be one of the wildest nights of the year. Not much contest really, is there?

Make sure you’re outside for the midnight countdown, though, as the public fireworks display, visible from most
of the city centre, will be a show-stopper.

Drink: A Welsh single malt? Nah, more like vodka jelly shots, two-for-one alcopops, champagne – if someone else buys – and a few tequila slammers to see you through to 2013.

Wear: Taffies love going all-out and dressing up to the nines, so expect to see sparkly dresses, stilettos and designer shirts all getting an outing tonight.

Top five places to surf and ski in one day