Travelling in North and South Korea

Korea might be off the standard the average backpacker’s route, but all the more reason to visit. Here’s what happened when Lucy Corne took a trip through the mountains.

Jeju-do, South Korea’s honeymoon island is a place of superlatives – it’s home to South Korea’s highest mountain, its southernmost point and its most striking scenery.

My friend and I start on a literal high, trekking to the peak of Mount Halla, 1950m above sea level. South Koreans are not half-hearted people; they are fanatical about pretty much everything – including hiking.So as we pass white-haired hikers in fluorescent North Face gear, sporting matching visors and go-faster poles, we feel a little underdressed in our trainers, shorts and T-shirts.

But as with most Korean hikes, the going is not too tough thanks to a network of well-kept paths, wooden walkways and staircases complete with handrails.

Still, it’s a pretty gruelling hike for the out-of-practice – a steep 6km uphill trek that is only outdone by the knee-wrenching downhill return leg.

The reward for a two-hour session is a startling view of the island below, with the added bonus of a crater lake in the foreground. Gazing longingly at the lake-topped peak above us, we join our group for a Korean picnic of kimbap – a rice and seaweed snack akin to sushi rolls – before heading back to our rented moped. 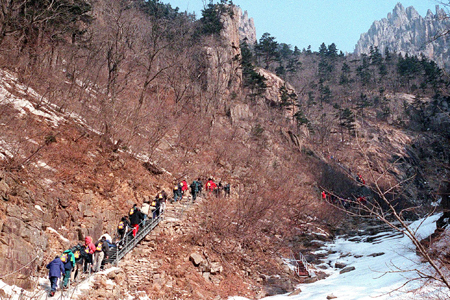 The ‘Hawaii of Korea’

With the energetic aspect of our trip dealt with, we turn to the more relaxing pursuits the island is best known for.

At Jeju Loveland, the island’s original sex attraction, 8km from the capital, we pay £4 and enter the all-concealing walls. 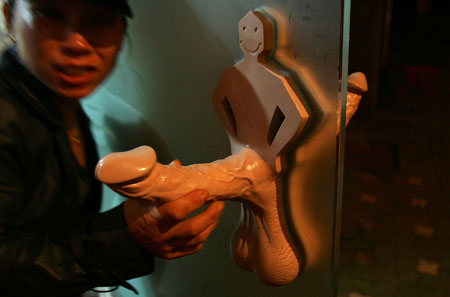 Jeju’s second city, Seogwipo, is not a pretty place, but the Jeongbang Waterfall just out of town makes you instantly forget the neon-framed maze of backstreets.

Crashing 23 metres straight into the East China Sea, it outshines some of Asia’s famed waterfalls and marks the start of a string of natural attractions. Jeju’s south coast features striking rock formations, a trio of worthy waterfalls and the hopping off point for Marado, a tiny island off Jeju’s southern coast.

Like many visitors we brave the vomit-inducing ferry ride to enjoy car-free roads (the only transport here is golf carts), buildings so pristine they seem to belong in a theme park and, of course, Korea’s southern tip, an unassuming spot that we actually miss as we enjoy Marado’s perfectly manicured panorama.

Jeju never fails to amaze with its vistas, its variation and its unique attractions, yet it’s clear what makes this island special. Beaches, waterfalls and even volcanoes are attractions easy to find the world over, but how often do you get to post a profile picture of yourself and a group of giggling grannies ogling an enormous penis? 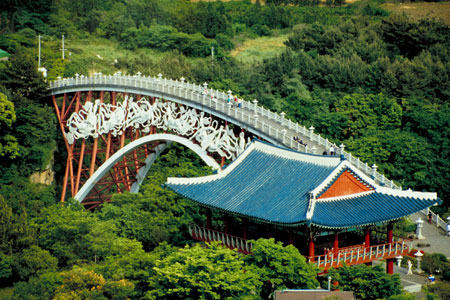 A peek into the hermit kingdom

You pass through a doorway blasting out cool jets of air into a room lit only by red bulbs. As your eyes grow accustomed to the dim lighting, you gradually make out the shapes before you – a wooden structure, a glass case and, behind the glass, the embalmed remains of deceased head of state, Kim II-sung.

Just another day on the bizarre experience that is a tour through North Korea, the world’s most secretive nation.

Independent travel is unheard of, instead tour groups are watched over at all times by government guides on an intense schedule – an exhausting but mesmerising peek into the totalitarian regime ruled over by Kim Jong-il (The Dear Leader) and his dead father Kim Il-sung (The Great Leader).

Here’s what you should see:

Kumsusan Memorial Palace The final resting place of the Great Leader is the jewel in Pyongyang’s crown of bizarre monuments.

Mansudae Grand Monument This 20-metre-high bronze statue of Kim Il-sung is revered by North Koreans. Take flowers to lay at its feet and reserve your deepest bow for this gargantuan image.

Tower of the Juche Idea ‘Juche’ is Kim Il-sung’s theory of self-reliance, the ideology that makes North Korea the secretive nation it is today. Overlooking the Taedong River, the 170-metre-high tower topped with a perpetually glowing fibreglass flame (electricity flows at the monuments, though not always in the city) gives great views over Pyongyang.

Pyongyang Metro In most places, the metro is a way to move between attractions, but in a country as mysterious as this, everything becomes a sight in its own right. The alarmingly deep stations (doubling as nuclear bunkers) are adorned with chandeliers and the ubiquitous propaganda paintings that characterise North Korea.

Victorious Fatherland Liberation War Museum  A fabulously named museum offering an alternative look at the events of the Korean War. Don’t expect to find
the messages of peace and reconciliation common at other war museums; the message here is clear: ‘They started it and we won.’

The DMZ (Demilitarized Zone) The world’s most fascinating (and heavily armed) border separates North from South. Tours from either country offer an interesting slice of history and a chance to peer at soldiers from the other side just a few metres away.

International Friendship Exhibition One of the most bizarre attractions in a land where bizarre is the norm. Admire highlights from the 100,000-plus collection of gifts presented to Kim Jong-il and his father from admirers worldwide – from teddies and crockery to animal pelts, bullet-proof cars and a full-size waxwork of the Great Leader in Disney-like surrounds.

Mount Paekdu The alleged birthplace of Kim Jong-il is an extinct volcano in the country’s far north and a spectacularly beautiful spot. If you’re getting propaganda withdrawal symptoms, the Secret Camp and monuments to the Dear Leader’s glorious life will deliver your fix.

Kumgangsan Another beauty spot, the ‘Diamond Mountains’ are perfect for hikers, mountaineers and photographers, if you can escape your tour guide long enough to snap the waterfalls, temples and lagoons.

The Mass Games This immense display of synchronised gymnastics, dance and martial arts puts Olympic opening ceremonies to shame. The Games are held at various times throughout the year.

Korea could never be described as boring, and nowhere is the country’s distinctiveness as evident as in its edible offerings. Alongside spicy soups and barbequed meat, you’ll find a menu of intriguing items… 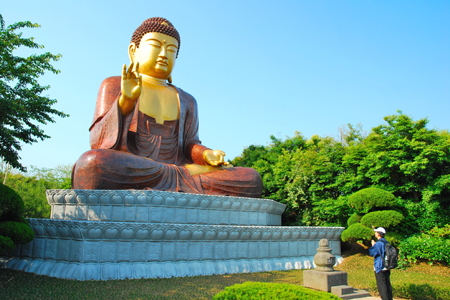 Getting there: Asiana Airlines offers direct flights from London to Seoul (from £900 return, 11 hours). Indirect flights with Air France start at £600 and take around 16 hours. Regular flights to Jeju from Seoul take an hour (from £65 return). Tours to North Korea leave from Beijing (crossing the DMZ is not allowed). Korea Konsult offers week-long trips from €1300 (koreakonsult.com/index_eng.htm).
When to go The best time to visit Korea is autumn (September to late October) when the rains have past but cold weather is yet to arrive. Try to coincide a North Korea trip with the Mass Games, held from August 1 to October 10 2011.